Liu Qiyuan, a farmer in Qiantun, China, was worried enough about the possibility of the coming Mayan apocalypse that he decided to take matters into his own hands. Unlike some of his countrymen, though, Liu shunned the run-of-the-mill Noah's Ark copycats in favor of 21st century innovation.

The result? A set of seven "emergency pods" constructed to survive a potential apocalypse. (Despite their innovations, Liu has nicknamed them "Noah's Ark," according to the Daily Mail).

Each pod is a self-contained sphere built of waterproof fiberglass and steel. When submerged in water, they automatically float upright -- and in the event the 14 possible occupants get jostled around too much, there are seat belts. Passengers also have access to a store of food, oxygen and water supplies.

"The pod won’t have any problems even if there are 3,000-foot high waves -- it's like a ping pong ball, it's skin may be thin but it can withstand a lot of pressure,” Liu told AFP.

He added, "I worked for many years without saving much money ... invested most of my money in the pods, because it’s worth it, it’s about saving lives." Each pod cost an estimated $48,000, reports RT, leaving Liu in quite a bit of debt. Then again, if it's the end of the world, that'll be the last of his worries.

According to a survey conducted by Ipsos-Reuters, 20 percent of the Chinese population believes the Mayan calendar accurately predicts the end of the world in December 2012. That's the highest percentage for any country in the world, followed by Turkey at 13 percent.

PHOTOS of the survival pods:

End of the World China 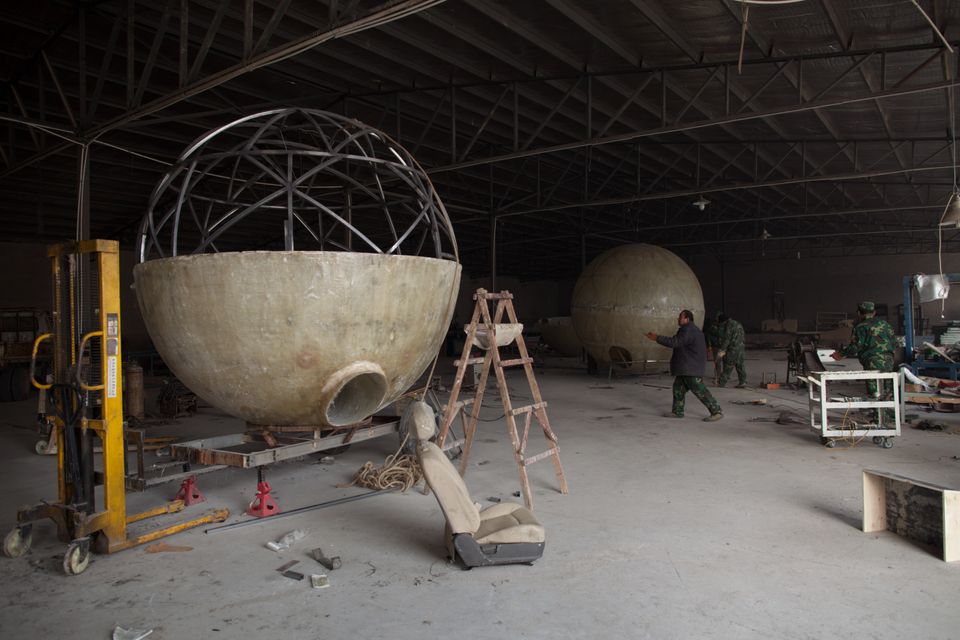 1 / 21
Liu Qiyuan's Apocalypse Survival Pods
Incomplete survival pods stand in the workshop of farmer Liu Qiyuan which he has also dubbed 'Noah's Arc', in a yard at his home in the village of Qiantun, Hebei province, south of Beijing on December 11, 2012. Inspired by the apocalyptic Hollywood movie '2012' and the 2004 Asian tsunami, Liu hopes that his creations consisting of a fibreglass shell around a steel frame will be adopted by government departments and international organisations for use in the event of tsunamis and earthquakes. Liu has built seven pods which are able to float on water, some of which have their own propulsion. The airtight spheres with varying interiors contain oxygen tanks and seatbelts with space for around 14 people, and are designed to remain upright when in water. AFP PHOTO / Ed Jones
Getty Images