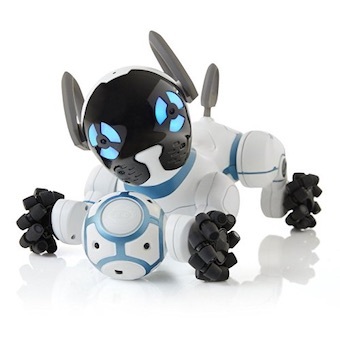 According to the Oxford Dictionary, that phrase has been around since 1841. Fine, we know the phrase is old, but is it accurate? Well, it is totally sexist, so let's update it for modern times -

Perhaps then there is an opening for CHiP The Lovable, Robotic Dog from WowWee ($199) to wiggle its way into our heart and become our new best friend.

To find out, we spent the last few weeks living with CHiP, here is our two part video review -

CHiP Certainly Takes Robotic Pets To The Next Level

As the video shows, CHiP has plenty of spunk, personality and not once in his 3 weeks with us did he pee on the carpet. The combination of the Smart Bed, Smart Ball and Smart Band all make CHiP very, what's the word, don't tell me... that's right smart!

Here are the key features of CHiP -

To read more about the key features of CHiP, please read our full review of CHiP the Robotic Dog by WowWee.

For Now, Groover Still Doesn't Have Much To Worry About

Let's be clear about this, we were very impressed with CHiP. The ability for CHiP to always be on and come to you via the SmartBand is very impressive. At points we were playing with CHiP and almost forget it was a bunch of chips, wires and sensors. CHiP comes alive at various times, starts to explore and you never really know what CHiP might do...just like a real dog.

Then there were the times CHiP got caught under a table or smashed into a wall trying to come to us. It is at these times that you realize that CHiP is still a robot and as advanced as it is, Groover has nothing to worry about...yet.

While CHiP is not ready to become our best friend it is still a very cool toy that should only grow and get better with firmware updates. Now if only there was a firmware upgrade to stop Groover from eating the garbage.