I was leading a yoga teacher training when I heard the news. Lululemon founder, Chip Wilson had said that "Frankly, some women's bodies just don't actually work [for Lululemon yoga pants]. It's about the rubbing through the thighs and how much pressure is there." In the room with me that day were two lovely employees of Lululemon who looked incredibly embarrassed at the comment and gave a weak smile to the rest of the class... who were all women. They looked at me for a response, and I said the first thing that came to mind: "Chip Wilson can kiss my fat yoga ass."

As a former two-time ambassador to Lululemon, I had been proud to wear the clothing and felt supported by the company who asked me to teach on the occasional Saturday to yoga-hungry shoppers. As an ambassador in Denver to the first Lululemon store in the state, they even hosted a CD release party for me when my first album came out. In New York City, I was an ambassador for the opening of their Union Square location and I was psyched when they asked me to perform for their opening. Nice people.

So what the hell happened?

Over the years, I've witnessed some strange things within the company. Many of my yoga teaching friends have gotten jobs there because, lord knows, it's damned near impossible to pay the rent solely through teaching yoga. Of all the people I've known to work for Lululemon, few have worked there for very long. Most have left very unhappily citing problems with upper management and this weird, cult-like pressure to go through the Landmark Education Training -- which is the "gift" employees receive on their anniversary. I didn't feel comfortable with this notion, as any idea of trying to encourage a group of people to think the same way feels too much like a cult to me, so I started to back off with my involvement with them. Eventually, there was news of someone being killed in a Lululemon store, reports of see-through pants, and a continuous escalation of the prices of their goods... not to mention outrage about founder Chip Wilson's beliefs which "include favoring child labor, his disdain for the ability of the Japanese to speak English, a love of Ayn Rand, and his opinion that The Pill created a generation of divorce-shattered women now seeking empowerment through yoga."

I gathered up all my Lululemon one day and gave it to some underpaid front desk workers at my home yoga studio in New York. I knew they weren't going to be able to afford those pants, and by that point, I had realized something. Lululemon had been preying on the kindness of the yoga community for quite some time. I'd had quite enough.

For all our shortcomings and the hippie-laden rumors, yoga people are nice people. We tend to be the kind of folks who are eager to help, eager to smile and eager to do good things for the world and other people. One of the things built into the yoga practice is the idea of seva, or service. When yoga people are asked to do something, they often not only step up to the plate, they generally go way beyond it.

What a better way to garner a crew of shiny, happy, underpaid people who would be willing to work hard and not question the corporate dictate than to go after kind-hearted yogis? 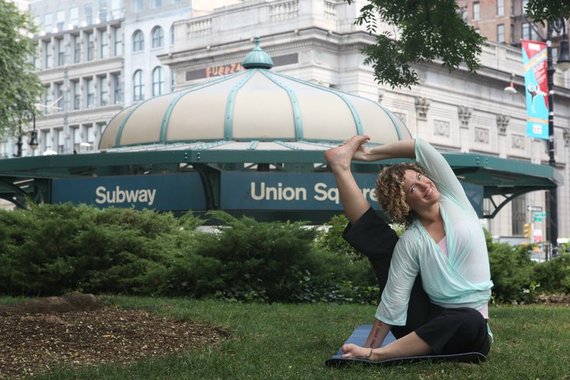 This used to be me, too (see pic of me as the Union Square NYC ambassador). I have taught free classes for Lululemon all across the country, and only been paid in sweat-shop-labor-made Whisper tanks. I felt like it was good exposure, and I always try to teach when it's asked of me, but eventually something didn't add up. Why wasn't I feeling good about participating in these "community building" events? Because they weren't for me, or for the students, they were for Lululemon.

Get a bunch of people in a vacant store filled with nothing but Lululemon product and feed them 60 minutes of free, good quality yoga. And when they're just coming out of their yoga buzz-filled shavasana, turn on the lights and start up the cash registers. Ka-Ching!

Brilliant move. Except, the yoga teacher has just given up her Saturday and will probably go teach three more paid classes that day just to make what she needs to pay her electricity bill that week.

But let's not stray from the current debacle at hand. Chip Wilson -- after all the recent questionable press on Lululemon (my favorite being the Stephen Colbert rant) -- has taken a stab at the shape of women's bodies.

It makes me cringe. Literally cringe. A company who is supposedly meant to embrace the values of yoga has just missed one entire, basic principle of the practice:

That EVERYONE is accepted.

So when did yoga become the property of the wealthy and skinny? That's how Lululemon is defining their customer by pricing things so highly and criticizing the shape of women's bodies for not fitting into their clothing.

Because I've seen some goddamn beautiful women in all shapes and sizes. And, pardon me, Chip, but my thighs definitely rub together, and I'm a size 12... almost too fat to be part of your demographic. Makes me wonder how I was ever chosen to be an ambassador.

Oh, that's right, because I could bring customers through the doors. By me squeezing my size 12 ass into your tiny pants -- which I have done, because they were free -- and showing up to teach free classes on a Saturday morning, I showed people that I was embracing your brand. So, they may have, too.

Well, not any more.

I have one last vestige of my Lulu-loving days left. A darling fall coat with a big cowl neck in grey that I absolutely love. It's the perfect weight, miraculously fits me well and I've worn it so often there's a hole in both pockets.

But, I'm not fooled any more. Chip, this is a two-way street. I've done a lot to help you further your so-called yoga-based brand. I was even there in New York to ring the bell at NASDAQ the day your company went public. If you're not going to accept me -- and my thighs! -- for who I am, then I reject all ties to you.

I'm hanging up my Lululemon hat. No more ambassadorship or sheer pants for me. If you're just as upset at this recent behavior by the founder and the company who claims to embody yoga, then stop putting your beautiful body in their ridiculously expensive sheer pants. Let's start standing for what is important to our value system as yoga practitioners... in all the ways we can.

I'll be giving my beloved grey coat to a homeless person who is cold here in New York City. I know they can't afford it, and it will serve them far better than it will serve me at this time (Like this great movement in response to similar behavior by Abercrombie). I encourage all of you to do the same. In the spirit of upholding the acceptance, openness and inclusiveness that yoga embraces, let's use our yogic powers to do what we can to tell Chip Wilson and Lululemon that we will not stand for this behavior, particularly when yoga has been so identified with Lululemon pants in recent history. We vote with our dollars, our actions and our behavior. Wear out what you have. Give away the rest.