In 1997, 1 in 7 children (or over 14 percent) were living without health insurance coverage in the United States. In response to this crisis, Senators Edward Kennedy (D-MA) and Orrin Hatch (R-UT) worked together on legislation to expand health coverage to our nation's 10 million uninsured children. According to the New York Times, Senator Hatch said that "as a nation, as a society, we have the moral responsibility" to provide coverage for the most vulnerable children.

The initial bill formed the basis of a bipartisan child health package in the Senate Finance Committee that eventually worked its way through a Republican-led Congress and became part of the Balanced Budget Act of 1997. The final package was signed into law by President Bill Clinton on August 5, 1997, and resulted in the creation of what was initially known as the State Children's Health Insurance Program (SCHIP) -- now known more simply as the Children's Health Insurance Program (CHIP).

Over CHIP's 18 years, the program has undergone a few tense moments, such as when President George W. Bush vetoed CHIP's reauthorization twice in 2007. However, in every instance, a bipartisan group of lawmakers have worked together to extend both the program and its funding. In fact, earlier this year, the program was extended through 2017 as part of the Medicare Access and CHIP Reauthorization Act.

The fact is that, in partnership with Medicaid, CHIP works very well. Although it is rarely hyped, CHIP continues to have strong bipartisan support at the federal and state levels, including strong support from our nation's governors, as it quietly goes about the business of efficiently providing health coverage to over 8 million children in low-income working families across the country. The program's child-specific benefits and child-focused provider networks are created in recognition of the fact that kids have unique health and developmental needs.

Despite its success, CHIP's future remains somewhat tenuous. During consideration of the Affordable Care Act (ACA) in 2009 and 2010, for example, there was some initial thought and some expressed support from a few important organizations, such as the American Hospital Association, for eliminating CHIP and moving the 8 million children that the program serves into the ACA's Marketplace exchanges.

However, advocates for children, including First Focus, shared data and research with Congress that provided evidence that children would be left worse off in terms of coverage, affordability, benefits, access to care, provider network adequacy, and quality of care if CHIP were eliminated.

Consequently, the United States Senate moved to protect CHIP from proposals and efforts to eliminate it. Although some have suggested that Congress intended for CHIP to be temporarily extended through 2015, the fact is that the Senate made a very conscientious effort to keep CHIP strong and independent. There is no ambiguity whatsoever about this.

According to Senator Jay Rockefeller (D-WV), who authored the amendment that ensured CHIP was protected:

As health reform moves forward, we need to make sure children can keep their CHIP coverage and not be forced into untested private coverage.

The Congressional Budget Office has been very clear that replacing CHIP with private health coverage will lead some children to lose their health coverage altogether, which is harmful and intolerable. Health care reform should improve the coverage children have -- not take their coverage away.

I have spent my entire career working to protect children and other vulnerable populations, and will keep fighting to protect CHIP as health care reform goes to the Senate floor, and then moves to conference with the House of Representatives. We must do all we can to shield children from harm. Always.

One of the reasons we are debating health care reform is to make sure we are doing everything possible to strengthen the Children's Health Insurance Program and do not allow it to be weakened in any way.

One way to weaken it -- and fortunately the Senate Finance Committee did not do this in their final bill -- is to take a stand-alone, successful, effective Children's Health Insurance Program and put it in the health insurance exchange. It may sound good -- within one system -- but I believe, and many others believe, it would be very bad. The Finance Committee, led by Senator Rocekfeller, worked very hard to make it possible to keep the Children's Health Insurance Program as a separate stand-alone program.

Casey went on to describe how children would be left worse off in terms of cost-sharing protections, benefits, and even coverage, if CHIP were eliminated. As he said:

By one estimate, in Pennsylvania alone, this means that nearly 100,000 children who currently have insurance coverage would lose it. . . .

This latter concern is due to what is described as the "family glitch" in the ACA, which imposes an affordability test that would cause an estimated 1-2 million children currently covered by CHIP to lose coverage altogether because they would be unable to access tax credits through the ACA and would find coverage to be unaffordable.

Six years later and after the implementation of the ACA, the evidence continues to show that CHIP has much lower cost-sharing, more comprehensive child-focused benefits, and stronger child-centered provider networks than coverage offered through employer-sponsored insurance (ESI) or through the Marketplace exchanges. 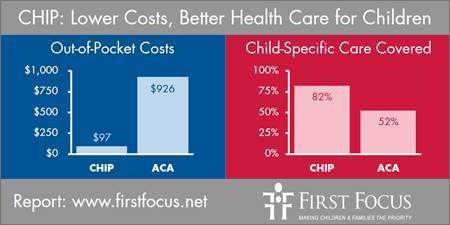 And yet, there continue to be some that contend it would be preferable for CHIP to be abolished. One argument is that eliminating CHIP would "simplify" coverage. According to the Bipartisan Policy Center (BPC), ending CHIP and moving kids to exchange plans would serve "to unify families and prevent churning in eligibility between programs and policies."

But, is that what parents want and desire? Are parents asking to move their children out of CHIP and into their own plan on the Marketplace exchanges?

Based on 14 focus group discussions conducted by the Kaiser Family Foundation's (KFF) Commission on Medicaid and the Uninsured, the answer is a resounding "no".

Since parents with children covered by CHIP are working families living "on tight budgets," the focus group members said that "[a]ffordability was a primary concern followed by broad coverage." And, due to the fact that CHIP is far more affordable than either ESI or Marketplace coverage that the parents had, parents expressed a strong interest in maintaining CHIP coverage for their children.

As KFF's Robin Rudowitz says, "most of those with children in CHIP noted lower costs far outweighed any issues with having children in separate plans."

Most parents with children in CHIP indicated that they had few difficulties managing their children's coverage separately from their own, and several indicated that they found CHIP coverage to be much less complex and burdensome than their own private plans because there were fewer bills to track compared to private coverage.

As for BPC's argument that it is desirable for a family to be enrolled all under one plan, the Kaiser focus group parents indicated the opposite was true. Rudowitz explains:

. . .for most families, the providers used by their children (pediatricians and other specialists) were not the same as those used by the parents. In addition, nearly all of the participants also indicated that they found their plans to be very expensive and would be willing to have their children in separate coverage if it meant they would have lower costs and could maintain similar benefits and providers. A number of parents said that they would gladly put up with a few headaches or hassle of dealing with separate plans for their children to save money.

Parents recognize that children have unique health care needs and different providers than they do. And since CHIP is far more affordable and has better benefits than coverage offered in ESI and Marketplace plans, Rudowitz concludes:

If coverage were comparable, parents and child advocates might agree to eliminate CHIP and to move kids into Marketplace coverage. To do so, BPC recommends:

However, the Medicaid and CHIP Payment and Access Commission (MACPAC) recently presented estimates from the Urban Institute that, even if Congress attempted to fix the "family glitch," coverage in the ACA would still be unaffordable to low-income families. Consequently, even if the "family glitch" were fixed, 500,000 to 1.1 million children would still lose coverage if CHIP was eliminated.

Therefore, to protect children from being left worse off, Congress would have to
enact legislation that would improve the ACA in a number of ways, including significantly reducing out-of-pocket costs for children, expanding pediatric benefits, improving pediatric and safety net provider networks, and enhancing quality and access to care standards at a substantial cost. The idea would be to raise ACA coverage to the CHIP standard. 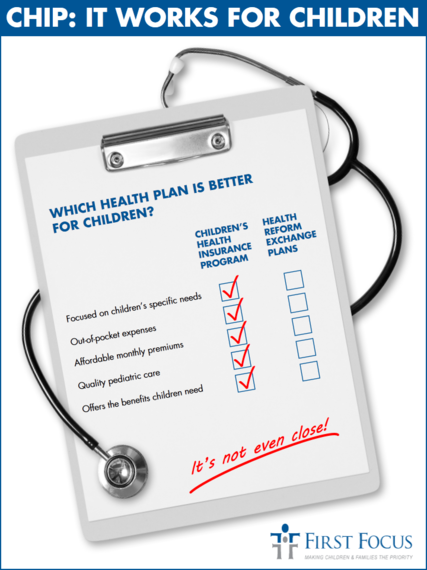 This creates a number of ironies. For one, the BPC argument urges the elimination of CHIP in order to simplify coverage for families even though "[p]arents of children in CHIP did not want children in their private coverage. . . ." Most parents want what is best for their children, and CHIP is far superior to alternative coverage options.

In addition, if the argument is to "simplify" coverage without leaving children worse off, an incredibly complex piece of legislation would need to be enacted that would radically overhaul pediatric coverage in both ESI and Marketplace exchange plans - a nearly impossible task or, put another way, the exact opposite of simple.

And that leads to the ultimate irony, which is that proponents of the elimination of CHIP are pushing for changes that would radically overhaul other forms of insurance to be more like . . . CHIP.

This begs the question: why end CHIP to recreate it? And, if the concern is about churning between policies as family income fluctuates, wouldn't it be far easier to just allow CHIP to be an option in the Marketplace exchanges? That would actually be simple and a way kids could keep their child-centered policies and provider networks, even when their parents' income changes.

Due to this success, CHIP is wildly popular. Although one pollster once joked that Americans are so disillusioned with politics right now that 25 percent oppose just about anything, an American Viewpoint poll last year found that voters strongly supported extending CHIP by a wide 74-14 percent margin.

Meanwhile, for Democrats, it is hard to imagine that they would support elimination of a program that was created under President Bill Clinton, extended under President Barack Obama in 2009, and successfully implemented in a successful manner by Democratic and Republican governors across the country. CHIP has, in partnership with Medicaid, cut the uninsured rate by more than half since its inception and has been a popular achievement as to how public policy can work well for children and families.

If nothing else, one would hope that Congress could agree on one simple thing: if it ain't broke, don't fix it.

And yet, saving CHIP from running out of money requires, when a new president takes office and a new Congress is seated in 2017, that they make the program's extension an urgent order of business. Such action will require an "act of Congress," and we all know that very phrase is used often to describe something that is nearly impossible to get accomplished.

The goal must continue to be focused on keeping protecting the coverage that has been working well for kids and ensuring that children are not left worse off as health system transformations advance. Therefore, advocates for children and their health care will need to redouble their efforts to ensure that CHIP is extended once again. With 94 percent of our nation's children now having health coverage and with many of them owing this achievement to CHIP, now is not the time to reverse course.