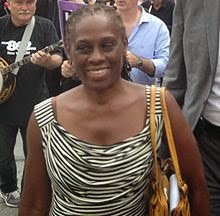 The Times bio of Chirlane McCray is a sign of hope, in otherwise bleak landscape of domestic and international affairs.

"Now, this one time student of powerlessness, a woman whose early identity was profoundly shaped by feelings of alienation--because of her race, her gender and her evolving sexuality--is emerging as the ultimate insider"

("Once Alienated, and Now a Force In Her Husband's Bid for Mayor," NYT, 10/1/13). The article goes on to describe the "bullying" she was subjected to

"in high school during the late l960's, where for a time she was the sole black student,"

and the ostracism she later faced at Wellesley when her

"being a lesbian was discovered."

The candor with which she describes her past should warm the hearts of anyone whose feelings of "not being a part of" are exacerbated by an ambivalent sexuality. And the model for her relationship to the man who is likely to be the future mayor of New York City turns out to be "the Clintons' working partnership." Politics and gender politics of course become uniquely conjoined in such a statement. But it's even simpler. How do you turn trouble and personal conflict into a source of strength? The Clintons certainly laid the groundwork for that and it's nice to think that the first lady of the City of New York is somebody you could conceivably talk to, if you were having problems fitting in. The truth is that in an age when there are few prescribed roles in terms of sexuality (are there men with the sensibility of women who love other women?) or politics (are there social progressives with the mentality of free market capitalists?), we're all outsiders. And strange bedfellows are likely to abound. How queer politics has become! Now if the de Blasio/McCray team can rid the city of stop and frisk type while retaining the services of the extremely capable current police commissioner Ray Kelly--they'll truly preside over the end of ideology and labeling, at least as far as politics is concerned.