Many people assume that chiropractic has always been a non-religious health care option much like modern medicine but less interventionist and more natural. Few people realize that chiropractic's founders renounced Christianity and modern medicine, or recall that for chiropractic's first 75 years of history, most Americans rejected it as a medically and religiously suspect "cult." Those who are aware of chiropractic's metaphysical origins may assume that the practice gained acceptance because it abandoned its religious philosophy. Instead, chiropractic became mainstream as promoters strategically wove between metaphysical, scientific, and Christian language to re-package chiropractic for American therapeutic tastes. In seeking an effective alternative to medical or religious healing, pain-motivated clients ask whether chiropractic works, but they more rarely ask why it is supposed to work.

Chiropractic developed out of Western metaphysical religion. Its founder, Daniel David Palmer (1845-1913), was a practicing mesmerist and spiritualist who attributed his "discovery" of chiropractic in 1895 to "communications" from the disembodied spirit of a deceased physician. As Palmer explained in The Chiropractor's Adjuster: Text-book of the Science, Art and Philosophy of Chiropractic for Students and Practitioners: "The New Theology" of healing or the "religion of chiropractic" stood on a "religious plank" termed "Innate Intelligence," or simply "Innate."

Palmer expounded: "That which I named innate (born with) is a segment of that Intelligence which fills the universe," a "part of the Creator." Displacement, or "subluxation," of spinal vertebrae impedes the freedom of Innate to flow from the universe through the human body. "Adjustments" restore Innate's ability to "care for and direct the functions of the body." 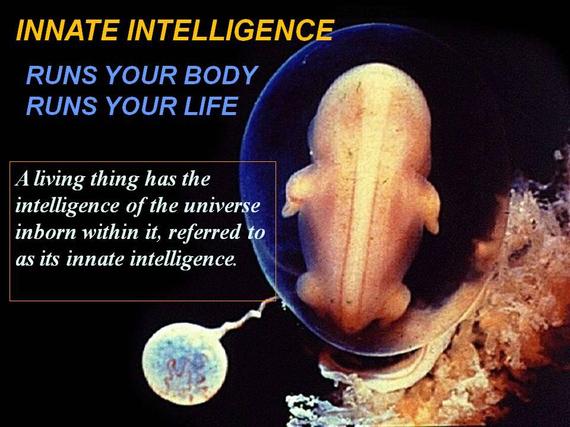 As leadership of the fledgling chiropractic profession passed from D. D. Palmer to his son, Bartlett Joshua Palmer (1881-1961), its religious distinctiveness from Christianity became more explicit. According to B. J. Palmer, chiropractic has no use for a "deity to which we can direct instructions of how to run the universe, or a soul to save for heaven or from hell." Asking Do Chiropractors Pray? in a book by that title, B. J. answered that "no Chiropractor would pray on his knees in a supplication to some invisible power" because "Innate Intelligence WITHIN man [i]s the all-wise, omnipotent, omniscient, omnipresent Director-General who asserts that THE ONLY possible cause and cure are WITHIN man."

Certain chiropractors, who consider the Palmers' religious views an embarrassment, argue that modern chiropractic has shed its early philosophy. Yet a profession-wide survey, How Chiropractors Think and Practice (2003), published by the Institute for Social Research at Ohio Northern University, confirmed that most chiropractors (whether "straights" or "mixers") still hold views of Innate and of the cause and cure of disease (not just back pain) consistent with those of the Palmers. On the one hand, modern promotional brochures make a bid for medical legitimacy by describing Innate and adjustments using more scientific-sounding terms such as "inherent" and "nerve force." On the other hand, publications targeted to sympathetic audiences quote appreciatively from the Palmers and personify Innate Intelligence as "soul and spirit." In typical fashion, chiropractor Mike Reid elaborates on the spiritual meanings of Innate in an article, "The Seven Laws of the Power of Attraction," for the Chiropractic Journal: A Publication of the World Chiropractic Alliance (2007):

We are spiritual beings who are a piece of an entire bigger picture with a purpose in life ... As chiropractors, we already know that the universal intelligence lies within us as innate intelligence, causes our heart to beat, digests our food, and allows us to think as free people ... Listen to your innate ... Sit in a lotus position with your palms opened up. See yourself as one and the same with the universe.

More than a medical service, chiropractic -- like religion -- helps explain life's struggles, cope with present stress, and anticipate the future with hope. Whereas patients often experience medical doctors and clergy as unsympathetic, chiropractors spend up to an hour with patients at each of frequent appointments, touching, listening, and validating the legitimacy of complaints. Chiropractic fills a vacuum of meaning with an appealing explanation of pain: Something is simply out of adjustment, and balance can be restored without making either the hurting person or God morally culpable. The chiropractor takes control of the situation by doing something actively and by empowering patients to make lifestyle changes. Patients, who may have heard clergy defer hope of relief to the afterlife or physicians eradicate hope, gain reassurance that the situation will improve through ongoing adjustments. The intense loyalty and defensiveness exhibited by several Christians interviewed, through exclamations such as "I love my chiropractor!" suggest the tenacity with which they want to protect their means of meeting religious needs to identify causes, attribute blame, and find significance.

Many of the same Christians who exclaim that "so many chiropractors are Christians!" do not believe that all people who call themselves Christians really are. But chiropractors are made less instead of more responsible for proving their orthodoxy because of the services they offer. The case of chiropractic illustrates how metaphysical, medical, and evangelical strands of America's therapeutic culture intersect where those in need of healing assemble diverse resources to meet practical needs.

Readers intrigued -- or troubled -- by this post may wish to read the longer chapter that it summarizes: Chapter 4: "I Love My Chiropractor!" in The Healing Gods: Complementary and Alternative Medicine in Christian America (Oxford University Press, 2013), 91-111.