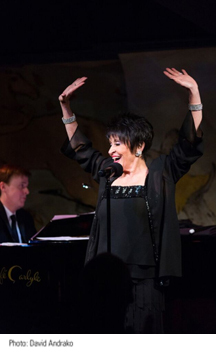 Nobody moves like Chita Rivera. With all due respect to Catherine Zeta-Jones who earned an Oscar for her film role as Velma in Chicago, with one quick pelvic thrust in director Rob Marshall's direction for Rivera's opening night at the Carlyle, Chita Rivera blows away all competition. Of course she originated the role of Velma in 1975, only one of her iconic Broadway performances in a career that includes Bye Bye Birdie, The Rink, Kiss of the Spider Woman, and West Side Story. Her set at the Carlyle, "An Evening of My Favorite Songs," features ample samples from her shows accompanied by an expert band, with music director Michael Croiter on guitar, Michael Patrick Walker, associate music director on piano, Jim Donica's bass and Dan Willis reeds. And, there are stories galore from this Broadway legend, who starts her set with "I Won't Dance," and says, "I have trouble standing still." From her, that's a promise.

She cha-chas through "I've Got a Lot of Living to Do." For a medley of songs from West Side Story, she tells of Leonard Bernstein teaching her the role of Anita, and sings "A Boy Like That," and "America." She remembers throwing her leg onto Antonio Banderas' shoulder in Nine, winking at the crowd: "Eat your heart out." On Tuesday night, she refrained from kicking her leg up that high, although watching her moves, you have no doubt she could. Most poignant was her rendition of "Winter," from Kander & Ebb's The Visit. She starred in that play on Broadway last year opposite Roger Rees, in his last performance. When she sings "Where Am I Going?" from Cy Coleman and Dorothy Fields' Sweet Charity, you feel grateful to have her right here.