Chloe Sevigny is the subject of Playboy's January 20Q feature, and in the interview she talks about the final season of 'Big Love,' her infamous oral sex scene in 'Brown Bunny' and her frustrations dating in New York.

Playboy's press release follows; scroll down for a sexy photo and read the whole thing here.

On her regrets about bad-mouthing Big Love to a reporter: "I got into a lot of trouble. It was a huge thing on the Internet. Yeah, I got a little talking-to. [laughs] I don't want to bite the hand that feeds me. I loved being on the show; I love my character and my co-stars. The whole experience has been great. I just felt it was a weaker season than others. I shouldn't have said it. I don't want to offend anybody."

On what to expect in the upcoming final season: "The writers are concentrating a lot more this year on the politics within the family. For viewers who keep asking why Bill and the family keep getting away with everything they do, this season the characters start having to face consequences. Since HBO said that viewers respond to how conservative my character is, she becomes stricter and more conservative. They're dressing me like Hillary Clinton in the 1980s."

On co-star Bill Paxton exposing himself on the show more than the women: "Bill likes to get his kit off, and he looks great. The first season, my character was aggressive in bed, but that changed by the second and third seasons, and there was no sex on season four. I don't know why, and I was confused by that. This season, aside from stuff with the teen characters, sex is still on the back burner. And although I have done nudity on the show, the other girls won't do topless. I don't want to be the show's Samantha, like on Sex and the City--the only woman who'll do nudity. So I refused to do any more and there was a lot of back-and-forth about it."

On her oral sex scene with Vincent Gallo in The Brown Bunny: "What's happened with that is all very complicated. There are a lot of emotions. I'll probably have to go to therapy at some point. But I love Vincent. The film is tragic and beautiful, and I'm proud of it and my performance. I'm sad that people think one way of the movie, but what can you do? I've done many explicit sex scenes, but I'm not that interested in doing any more. I'm more self-aware now and wouldn't be able to be as free, so why even do it?"

On interesting sexual propositions from women: "By the time of Boys Don't Cry I had already spoken in interviews about my sexual experimenting as a young person. It sure seems that I have a pretty strong lesbian fan base because when I'm out, everybody responds to those films. I get letters. Last year I got a weird note on my car: 'If you're bored, me too. Let's meet. Your new neighbor,' signed with the person's initials. It's kind of creepy. Does this person see me in my rented backyard, smoking and lonely?"

On what she looks for in a guy: "I want a guy who is masculine, good with his hands and able to build stuff and who has survival skills. Facial hair is a big turn-on. Most of the kids I hang out with in New York are hipster arty types, but I like a stronger, more physically imposing man--like a lumberjack. I'm also into a little hair pulling. I like boys to be aggressive and allow me to be a little aggressive back."

On her texting relationships: "I've been texting for a year with a couple of guys without ever going on a date with them. The other day I got a text from a boy, but it wasn't hot. I mean, if you're going to text me every day, you haven't seen me for months and you're trying to seduce me, you'd better spice up that text and make it more exciting than 'How was your day? I hope you're having a beautiful one.' Sadly, I haven't been doing a lot of kissing lately." 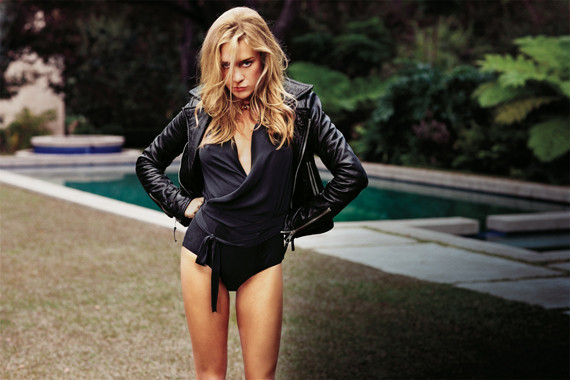