Doctors treat countless patients throughout their careers, but it's those with incredible strength against all odds that remind them why they chose the profession in the first place.

When Mark and Michelle Williams brought their 4-year-old daughter, Chloe, into Arnold Palmer Hospital in Orlando, Florida, on Christmas Eve of 2009, Dr. Alex Levy met one of his most determined patients yet and wanted nothing more than to help her survive.

The video above, which first hit the web in 2012 and resurfaced this week, tells the story of how Chloe was diagnosed with a malignant, cancerous brain tumor during that trip to the emergency room. As Dr. Levy broke the difficult news to the family, one particular piece of his conversation with her father resonated with him.

"I'll never forget that the dad said to me, 'Will I ever get to walk my daughter in her wedding?'" Dr. Levy told Strong Films, the group behind the "Chloe's Wedding Day" short film. "I said to him, 'I don't know, but we're going to try damn hard to make that happen.'"

After three surgeries and 18 months of chemotherapy treatments to remove the tumor, Chloe was declared tumor- and treatment-free, and returned to her happy former self. Alongside her parents, Dr. Levy watched Chloe push through her illness with indeterminable strength and felt nothing but pride for his brave patient. He was as excited to attend her wedding one day as her parents.

Just a few weeks before this film was made, Chloe's dad told Dr. Levy that he wanted the physician to be the one to walk Chloe down the aisle one day as a token of his immeasurable gratitude.

Chloe's cancer returned last year according to her website run by her parents, and yet again in February of this year, but, after a successful operation and continued treatment, she is now tumor-free again, Geo Morales, media relations and public affairs manager for Arnold Palmer Hospital for Children told HuffPost in a phone call. Chloe has completed her radiation treatments and now visits the hospital every other week for minor treatments and check-ups to try and prevent the cancer from coming back, said Morales.

"When that dad gives me a call and tells me to walk Chloe down the aisle for her wedding, I'll probably retire after that," Dr. Levy says in the film. "Because I don't think there could be a greater high or sense of fulfillment after that."

Chloe's parents started a fundraising page to help with the costs of her life-saving medical procedures. To donate, click here. 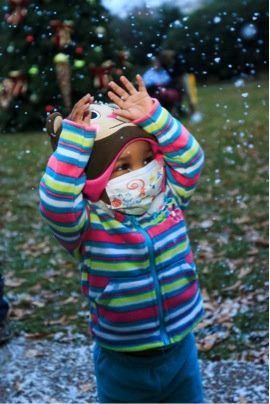 1 / 7
Surprise Snowfall Turns Atlanta Children's Hospital Into Winter Wonderland
On Monday, Dec. 2, 2013, Children's Healthcare of Atlanta teamed up with a special effects company to make it "snow" on its three campuses. Many of the children, who had to spend their holidays in the hospital, got to see snow for the first time. <a href="http://huff.to/1bSJUAn" target="_blank">http://huff.to/1bSJUAn</a>
AP / Paul Abell