The prevalence of human trafficking, child slavery, and abusive labor practices in the cacao industry is surprisingly under-reported. With the average U.S. citizen eating over 11 pounds of chocolate (that's about 120 chocolate bars), per year, it is incredible to consider how few of us are aware of the atrocities involved in 70 percent or more of the world's cacao production.

As a devoted chocolate lover, I was shocked and horrified to discover that many of my favorite seasonal treats -- treats that bring so much joy to children here in the U.S. -- are produced using abusive child labor. Major, trusted chocolate brands are often guilty of including cacao harvested by children and slaves in their supply chains.

Now, I choose to boycott any chocolate supplier who refuses to certify their products as free of coercive labor practices, child labor, and human trafficking.

According to an investigative report by the BBC, hundreds of thousands of children are being purchased from their parents or outright stolen and then shipped to Ivory Coast, where they are enslaved on cocoa farms. Destitute parents in these poverty-stricken lands sell their children to traffickers believing that they will find honest work in Ivory Coast and send some of their earnings home. The terrible reality is that these children, 11-to-16-years-old but sometimes younger, are forced to do hard manual labor 80 to 100 hours a week. They are paid nothing, receive no education, are under fed, and are often viciously beaten if they try to escape. Most will never see their families again. 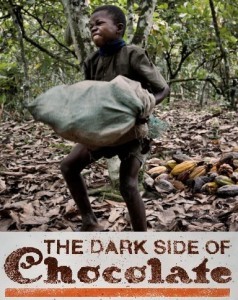 This image is published with permission courtesy of photographer Henrik Ipsen and the film The Dark Side of Chocolate.

Over a decade ago, two Congressmen, U.S. Rep. Eliot Engel, D-New York, and Sen. Tom Harkin, D-Iowa, attempted to remedy this issue. They introduced legislation mandating a labeling system for chocolate. After the deep pockets of the chocolate corporations protested, a compromise was reached that required chocolate companies to voluntarily certify they had stopped the practice of child labor. Originally, the certification process would include labeling chocolate products "Child Labor Free," but the labeling component was removed as part of the compromise. Many believe the legislation lost its teeth at that point.

Instead of the "Child Labor Free" label, the protocol now calls for public reporting by African governments, establishment of an audit system, and poverty remediation by 2005. The deadline had to be extended to 2008 (read Fortune magazine's report on the state of the protocol in 2008) and again to 2010. Today, human rights organizations report that some of the provisions have still not been met, and it is the biggest corporations who refuse to comply.

In 2012 there were some rumblings that this might be changing, but the change is likely to remain grindingly slow. Child slavery keeps costs down, which allows major corporations to keep their chocolate cheap. Not only does it cost more to pay laborers a fair wage, but the cost of monitoring the extensive supply chains of global corporations would be significant.

The next time you reach for a candy bar, buy candy to hand out to trick-or-treaters, or stock up for holiday baking, consider the price thousands of children are paying to bring you your chocolaty cheer.

But don't despair yet, chocolate lovers, ethically sourced chocolate is gaining prevalence and becoming easier to find (not to mention afford) every day. The key is in consumer awareness. Consumer dollars send a very clear message to manufacturers about what the public will and will not tolerate.

The most effective way to find ethically sourced chocolate is to look for a short supply chain. "Bean to bar" producers who own the entire production chain all the way back to the beans and "Direct Trade" producers whose chocolate comes from single, identifiable origins are ideal. Many companies today who proudly list extensive information on the cacao farms they work with on their labels. Equal Exchange and Askinosie Chocolate are two examples of such companies.

There are also several certifications on chocolate labels to indicate a slavery-free supply chain. These include Fair Trade, Equal Exchange, Fairtrade, and Rainforest Alliance (which has an added environmental component -- perfect since the chocolate industry is also guilty of devastating rainforests for plantations and production). Keep in mind that certification has its own bureaucratic pros and cons. Certification must be paid for by the company seeking it which can be a hurdle for small producers. A company can be ethical without certification, and a company with certification may still have other questionable practices.

The blog post, "Is There Child Slavery in Your Chocolate?", includes a long list of chocolate companies who are proudly Child Labor Free.

Ethically sourced brands can be more expensive than chocolate harvested by slaves, but the extra few cents is worth it every single time. Ethically sourced chocolate is so easy to find these days, I can't remember the last time I had a problem finding it. Still, if I can't find slave-free chocolate, I don't buy chocolate. For holidays we often order in bulk, which can be a big money saver.

Other steps you can take to help with this cause:

*Fill out Hershey's corporate responsibility online survey. Urge them to establish an ethical and slavery-free supply chain. Tell them you won't have your money contributing to human trafficking.

*For as little as $6, get a DVD copy of the film The Dark Side of Chocolate, along with information about Fair Trade, from the dedicated people at Green America. Watch it, show it to your friends, and spread the word.

* EDUCATE YOURSELF AND OTHERS. Tweet about this article, pin it, and post it to your Facebook page. Spread the word until this dirty little secret is completely out in the open.

Check out these sources for more information:

Professor and Director of Street Markets