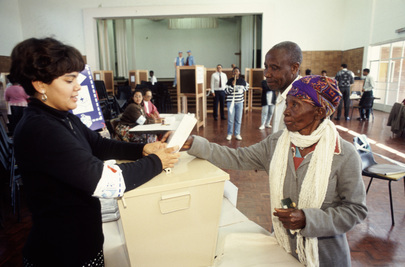 "Voter fraud" or "voter suppression" defines current contortionist politics, too frequently depending on one's party affiliation. There are some lessons America can garner from the experience of other societies more recently and perhaps its own before most US voters were born. Democracy frustrated can erupt into civil disobedience, even violence. More immediately, by pressing "voter suppression" with little evidence of "voter fraud," are some opting for the fleeting election day victory but risking indefinite damage to the social fabric that keeps the US largely politically conversant and peaceful despite significant differences from demographics and identity to opportunity and income inequality?

Elections as props for less than democratic authority?

Elections are stolen all the time. Even North Korea officially has elections. The Assad regime in Syria orchestrated elections before the protests started and then after, only intensifying the civil war. In China, candidates have to be approved by the single party apparatus. An election about to be stolen in the West Africa's Ivory Coast sparked a brief but brutal civil war that was massaged by the loser into an ethnic/religious conflict. Iran has a vibrant democracy except for the fact that the "Supreme Leader" decrees that all candidates have to be vetted on basis of loyalty to the current political system and presumed moral virtue. Before the collapse of the Iron Curtain, elections in most Communist dominated states of Europe were regularly held, but the populations overwhelmingly rebelled, using force or mass peaceful protest to orchestrate a more inclusive and free political system. The transition toward democracy has not always been smooth. In Ukraine, as still lingering in SE Europe, elections take on an ethnic delineation that camouflages a patronage system. The Arab Spring has almost as quickly devolved into an indefinite frost. Thailand's elections have become battle-lines, literally. In Myanmar, ethnic/religious minorities are denied the vote as means of also depriving them of identity as citizens -- ethnic cleansing follows. The new Russia appeals to the myth of Soviet power and nationalism have been put out as a lure and distraction from real issues. But then how is that different from xenophobia in Western Europe and Australia or religious orientation paraded under the guise of family values or even patriotism? Nonetheless, the ideal of the right of citizens to elect their own leaders has assumed a greater debate at the United Nations even as some countries and/or regimes only offer pretense or excuses.

Universal suffrage was espoused in the Declaration of Independence, but America's Founding Father's lacked action in what they envisioned with their inclusive language. Rebellions defined the earlier years of the United States. Voters were frequently defined by economic status, race and/or gender. Ironic that Native Americans had no vote in the country that was once all theirs. Hispanics were viewed as outsiders even in lands that the US conquered from Mexico. Former slaves continued to be confined to second-class status as the slavery culture evolved more convoluted methods and rationalizations to keep them in the fields and out of schools. Rosa Parks, MLK Jr., Malcolm X, and Muhammad Ali asserted identity and claim to rights too long assumed to exclude persons of color. So, are we back there again, the civil disobedience and violent protests?

In the United States nothing is given to you even if it is bestowed in language. Can it even be taken from you, unless vigilant? Innovation, economic prosperity and wealth accumulation are nurtured by an environment that at least in word promises equal opportunity and access to political impact. Citizens acting as voters become vested in a system even if opportunity is not always realized in outcomes as long as there is a sense of participation, inclusion.

The documented increase over the last few decades in wealth disparity has been creeping into the political system via the ever greater influence of money on elections and US judicial rulings that have unleashed corporate funds and eliminated almost any pretense of political contribution limits. Buying luxury cars, yachts or villas may be part of the American Dream, but conspicuous consumption of election results runs contrary to the notion of equality among citizens.

The image of America's political egalitarianism is further eroded if some scheme to keep the economically or otherwise most disadvantaged from access to the ballot box. The ever more elaborate demands of IDs and otherwise to enter the voting booth may appear innocuous to some. However, intoxicated by their unleashed influence many political operatives bark out the purpose of such new restrictions to secure election results by discouraging and marginalizing the voter turnout of minorities, the poor, the young, but also disabled and elderly. With very few cases of voter impersonation/fraud evidenced, those pressing forward with such new voter requirements have been unable to contain their enthusiasm to engineer election results beyond the traditionally tolerated money influence and even gerrymandering. Further restrictions on early voting, location, and time open for voting has further exposed the intent of new voter requirements/restrictions. In Georgia, purportedly 40,000 voter registrations have been misplaced, again apparently affecting the least empowered communities/voters.

America's democracy is not only being undermined, but a large segment of our population is being told that their participation in our political process is not welcome. While some nations have imposed voting as mandatory for all citizens, the process of disenfranchisement in the US appears to be tolerated and/or encouraged at least by some political elites who claim to represent us as a whole. Protests such as the "Occupy Movement" are only the tip of an iceberg, but it is the discontent or more accurately the disillusionment that undermines both our political process and also the notion of equal opportunity -- outcomes in both economics and politics are being engineered by the "haves" while the "have-nots" are fed empty calories of equal opportunity.

Beyond the reality, the promise or at least illusion of free and fair elections:

The promise of equality among America's citizens has prevailed even when the reality was flawed. Elections based on economic opportunity offer hope to the aspiring. Individual talent, appeal of ideas, determination and hard work as well as luck are all accepted by the majority as defining outcomes; but does it increasingly appear that outcomes are predetermined? Is that the moment potentially when voters become rioters? The students, the aspirational and future of Hong Kong are engaged now in an extended campaign of civil disobedience to counter the effort by the Communist Party elite in Beijing and its local representatives to predestinate election results, even if the former British Colony has only tasted limited democratic rule. In the US, where voters elect presidents, representatives, mayors, judges, and even prosecutors, the notion of inclusiveness and participation in the political process is as or more important -- even if one does not participate, the opportunity or at least illusion of fair elections is as or more essential to a free market system here or in Hong Kong. On the other spectrum, ISIS offers no pretense about elections, but simply claims the right to speak on behalf of people and God. Elections may be a cloak, but unless citizens are visibly vested with the opportunity as voters, democracy becomes undressed and raw power presumes the mantle.

"High hopes" for the people!

Bruce Springsteen has translated his music to political engagement, rejecting the old notion that it is not cool for artists to engage. That model of artist, perhaps, evolved in a time when rulers claimed absolute or even divine authority, but now art speaks for national as well as global citizens who are the source of authority. As the concert, an election is more than a mere performance but an inclusive celebration that goes beyond the stage. I've had only one opportunity to meet/speak with Bruce, but the impression of the integrity and sincerity is embedded in the man and music. If Michelangelo was called upon to paint the Sistine Chapel of Diplomat-Artists, Bruce Springsteen would be on the ceiling. See: Do You See or Taste Music?

Bruce has been transparent in his causes, from political to humanitarian; but as critically, such has fed and empowered his music from the outset. See his YouTube video High Hopes