We are told regularly by advocates of the free market that more choice, as granted by the unfettered private marketplace, is the key to greater efficiency and value for consumers, whether in health care or otherwise. AHIP (the American Association of Health Plans) is committed to providing an "abundance of consumer choice" in its offerings.

So what does this vaunted increased choice, as claimed by the insurance industry, look like? Is it a choice of plans that offer financial security against the cost of major illness or injury, as should be the goal of insurance? These examples belie that premise:

The trend in employer-sponsored health insurance (ESI) is to cover fewer people with less coverage all the time, and to eliminate coverage for retirees if at all possible (eg., the auto industry)

Even when covered, there are many circumstances where enrollees' choices are minimal or non-existent, such as when their health plans make changes in network providers and hospitals, when plans withdraw from the market, or when lock-in rules restrict them from making changes at their own option

If one loses ESI, there is little recourse for many in the individual market, as these examples show: because of pre-existing conditions, many applicants are rejected for coverage; many who are not rejected cannot afford the premiums, which are one and a half times higher than the usual costs of ESI coverage; if one loses one's job, COBRA guarantees coverage for another 18 months, but only one -quarter of those people can afford continued coverage.

The Boston-based Access Project, a non-profit resource center working to improve health and health care access since 1998, recently conducted in-depth interviews with 45 people in seven states who had accrued medical debt while being privately insured. They found that only one-half of interviewees who had ESI were offered any choice of plans; even if they had a choice, they tended to choose a plan with the lowest premium because that was all they could afford, even though they felt vulnerable to increased out-of-pocket expenses.

The insurance industry has trotted out a growing number of limited benefit policies (LBP's) in recent years; do they offer useful choices? Here are two examples of heavily marketed plans at the moment: large employers such as Wall Mart, McDonalds and Lowe's, often have annual caps of coverage as low as $1,000 to $2,500; Aetna's Affordable Health Choices caps hospital benefits at $2,000 and accident/ER benefits at $1,000. Is this what market advocates have in mind about choice?

The health insurance industry is actually much more consolidated than we might think; the American Medical Association has found that private insurers have near-monopolies in 95 percent of HMO/PPO metropolitan markets; many of these markets have triggered antitrust concerns by the Department of Justice; as the accompanying graphic shows, a few insurers dominate the market in most states

The trends are obvious for the private health insurance industry - less coverage all the time for more money. It is a failed industry, though many have not yet recognized it (Wall Street is beginning to have concerns about its future). It succeeds only as long as its enormous administrative and overhead costs are paid by consumers convinced that their "choice" offers more value. All trends indicate, however, that it is an unsustainable industry. The sooner that Americans realize that, the better, since we have another, better choice as to how to finance health care - a single-payer public financing system with one big risk pool, combined with our private delivery system. 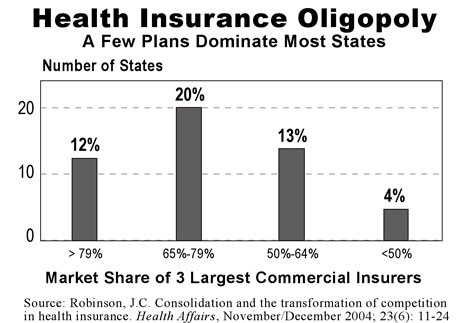 Adapted from Do Not Resuscitate: Why the Health Insurance Industry is Dying, and How We Must Replace It, forthcoming, August 2008 by John Geyman. With permission of the publisher, Common Courage Press.