Water scarcity, rapid economic growth, and soaring energy demand are forming a tightening noose that could choke off China's modernization.

Writes my colleague Keith Schneider in the first installment of the new report, Choke Point: China, from Circle of Blue:

Underlying China's new standing in the world, like a tectonic fault line, is an increasingly fierce competition between energy and water that threatens to upend China's progress.

The 12-part Choke Point: China series presents powerful evidence of the fierce contest between growth, water, and fuel that is virtually certain to grow more dire over the next decade. The project is produced in partnership with the Woodrow Wilson International Center for Scholars China Environment Forum.

Tight supplies of fresh water are nothing new in a nation where 80 percent of the rainfall and snowmelt occurs in the south, while just 20 percent of the moisture occurs in the mostly desert regions of the north and west. What's new is that China's surging economic growth is prompting the expanding industrial sector, which consumes 70 percent of the nation's energy, to call on the government to tap new energy supplies, particularly the enormous reserves of coal in the dry north.

The problem, scholars and government officials told us, is that there is not enough water to mine, process, and consume those reserves and still develop the modern cities and manufacturing centers that China envisions for the region. "Water shortage is the most important challenge to China right now, the biggest problem for future growth," said Wang Yahua, deputy director of the Center for China Study at Tsinghua University in Beijing. "It's a puzzle that the country has to solve."

The consequences of diminishing water reserves and rising energy demand have been a special focus of our attention for more than a year. In 2010, in our Choke Point: U.S. series, Circle of Blue found that rising energy demand and diminishing freshwater reserves are two trends moving in opposing directions across America. Moreover, the speed and force of the confrontation is occurring in the places where growth is highest and water resources are under the most stress -- California, the Southwest, the Rocky Mountain West, and the Southeast. 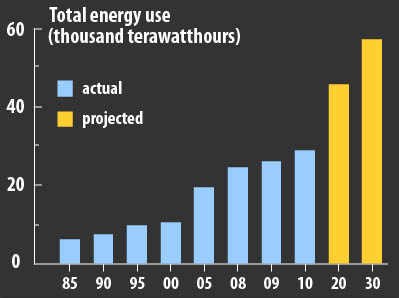 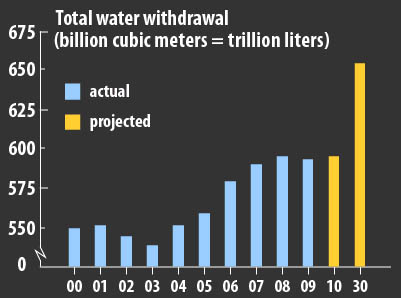 Choke Point: China, though, is not necessarily a story of doom.

We found a powerful narrative in China in two parts, and never before told: First is how effectively the national and provincial governments enacted and enforced a range of water conservation and efficiency measures that enabled China to progress as far as it has.

Second is that despite the extensive efforts to conserve water, and to develop water-sipping alternatives like wind and solar energy, China still faces an enormous projected shortfall of water this decade to its energy-rich northern and western provinces. How government and industry leaders respond to this critical and unyielding choke point forms the central story line of the next era of China's unfolding development.

I report on the competition between water, food and energy globally for Circle of Blue.