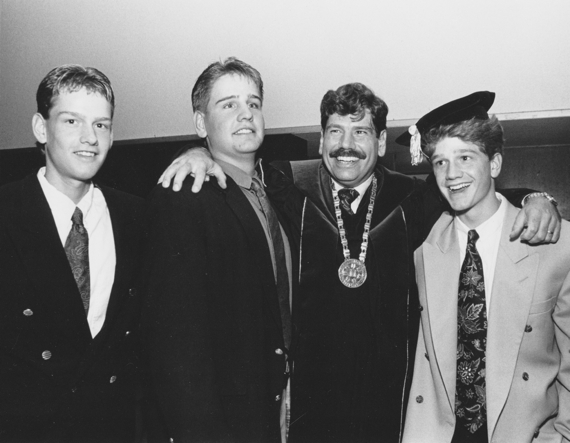 Many high school seniors are facing one of the most important choices they will confront in their lives: Which college should I attend next fall? In my previous post I wrote about five issues to consider when choosing a college.

But then I reflected on my role as a parent of five, remembering the advice I gave when they were making their decisions. I realized that my parental voice then was different from my presidential voice today. It was more particular. The reason is -- as any parent of two or more children knows -- that each child is different, and a college that suits one child may not suit another. And then too, I had my own views about education that I did not want to impose on my children, but wanted them to hear and understand. So my advice to each child was different.

One of my sons was studying away from home as a high school senior, so I had to put my advice to him in writing. He was resistant to the notion of a liberal education -- which I favored and hoped he would at least consider -- so I had to dig deep to convey my beliefs in a way that would not make him even more opposed to the idea. I can't claim any credit for his final decision to attend a small liberal arts college, but I thought other parents who are facing a similar situation might like to see a shortened version of the letter I sent to my son more than twenty years ago.

I know that you are struggling with some very difficult college choices. I thought it might help to hear what I think generally about education. These views are not held by very many nowadays, but they are very much mine.

Education is a lifelong activity. It consists of continual growth in understanding the nature of things and in discovering the meaning and purpose of your life. The best college education establishes a firm basis for this activity; it encourages the formation of good habits of thinking; and it aims, ultimately, at leading a rich and happy life. This is what we call "liberal education" -- education that liberates the soul from artificial and unhealthy constraints. It is not merely mastering information to pass a test, get a job, or make a lucrative living. Liberal education is much more fundamental than that. It satisfies a basic human desire, one almost as ingrained as the will to survive -- namely, the desire to know. If we are fortunate, education will help us acquire not only the intellectual virtues of thinking and knowing well, but also the ethical virtues of desiring and acting well. And it is the ethical virtues that make us better and happier people -- especially if we can use the intellectual virtues to recognize the goods toward which we should direct our desires.

I know that you do not like it when I talk about liberal education or liberal arts colleges. You say that these terms suggest an education that is more "academic" than you want. You say that such an education is only for "smart people," for those who are more bookish than you, like your elder brother who wants to be a teacher. I don't think so. I do not believe liberal education has anything to do with scholarship or with professional teaching. It is more about acquiring skills that make you want to learn just because you want to know, just because seeking the truth and occasionally finding it are good and satisfying things in themselves. This habit of learning for its own sake will help anyone think and act more responsibly and more thoughtfully in any of life's undertakings.

Even over the distance I can hear you protesting. "Dad, can you just explain what you mean in plain language? Give me an example." I can think of three that will show I'm not just talking about "intellectual" or "academic" ideas, but about ideas that will make sense in terms of activities you already enjoy.

(1) If you master the owner's manual for your 1972 Triumph, you may be able to figure out how to care for and repair your car. If that's all you learn, though, you won't be able to fix your friend's Toyota. However, if studying the manual and making the repairs teaches you the general principles of automotive mechanics, then you can diagnose and fix a problem in another car without a manual. This sort of education is not only useful, but it frees you from having to follow someone else's directions. It liberates you to act on your own, independently -- which is, in itself, very satisfying. This is what I mean by "liberal education."

(2) When you recite a passage from a play, you have learned little if you can only deliver the lines well with the help of a director. But if you understand the meaning of the lines, you can imagine yourself into the thoughts and feelings of the character, so that you can play the role more convincingly. Moreover, it will help you better understand the characters of men and women you meet in real life. It will help you think about how you might respond under circumstances similar to those within the play. And finally, acting in a play you have pondered to understand makes the acting much more satisfying and expansive. This is what I mean by "liberal education."

(3) When you build a stage set from someone else's pattern, the result may be wonderful. But could you create your own set for the next play? If, however, you understand the uses of oak rather than cottonwood, dowels rather than nails, cloth rather than plastic, and so on, you will have learned about design itself -- principles that will not only be useful elsewhere but are also in themselves satisfying to discover. You will also have learned something about beauty, and, quite probably, something about the natural world and man's place in relation to it. This is what I mean by "liberal education."

These are just examples. But they show what it means to study liberally, in a way that liberates you from the direction of others, encourages you to learn for yourself, satisfies the basic human desire to understand, and helps you then ask the next set of questions -- about what it means to be human, to live in the world, and to choose a life worth living.

While you try to make this difficult decision, I hope you will consider which colleges will offer the challenge and excitement of real learning by letting you participate in your own education. Which schools will encourage you to ask the questions you need to ask, not so that you will do well on your tests or get the job you want, but so that you will be happy in your life?