Our next president must be someone who understands the science of climate change and can build a clean energy future. 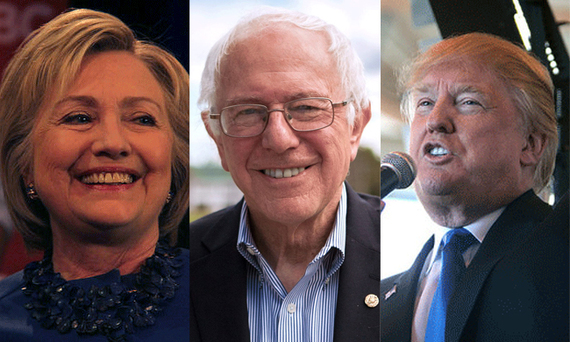 The burning of Fort McMurray in the Canadian province of Alberta is a terrifying glimpse of what a climate crisis looks like. While scientists are cautious about attributing any one event to global warming, the months without rain followed by unusually high temperatures are exactly the sort of conditions associated with a warming planet--and they set the conditions for big fires.

The dangers of runaway climate change make this U.S. presidential race pivotal. Our next president must be someone who understands the science, can build support for a clean energy future, and is independent enough from the fossil fuel industry and its investors to make the right choices.

The presumptive Republican nominee, Donald Trump, is unqualified. He is a climate denier. In an interview with The Washington Post editorial board, he dismissed the conclusion of 97 percent of climate scientists, saying, "I think there's a change in weather. I am not a great believer in man-made climate change." And in a 2014 tweet, he said: "This very expensive GLOBAL WARMING bullshit has got to stop." He supports building the Keystone XL pipeline, claiming on Fox News, "It's not an environmental problem at all, in any way, shape, or form."

A Trump presidency would be a climate disaster.

On the Democratic side, both Clinton and Sanders acknowledge the urgency of the climate crisis, and they are both rated "villains" by the Koch-backed American Energy Alliance.

But who is independent enough to lead a transition that can work--one that will distribute the benefits broadly, especially to those who are suffering in today's economy? Which candidate could rally the nation behind policies that would have real impact on the crisis?

Hillary Clinton's approach is much like Obama's "all of the above" strategy. She supports solar, energy efficiency, a continuation of fracking (with some regulations), and reliance on natural gas. She also supports research leading to the development of additional nuclear power, and carbon capture and sequestration--which coal advocates hope will revive that collapsing industry. And she promotes a carbon-emissions trading scheme with Canada and Mexico, reminiscent of NAFTA, which would be subject to profiteering and abuse.

Which candidate could rally the nation behind policies that would have real impact on the crisis?

Her record of ambivalence (or, less kindly, flip-flopping) and her continued endorsement of natural gas and fracking are not reassuring. Clinton's statements on the climate crisis indicate she will act, but the giant contributions to her campaign, super PAC, and the Clinton Foundation suggest that the action will be skewed to favor Wall Street and big corporations.

In contrast, Bernie Sanders' record has been unambiguous, and his legislation well-conceived. He has a long record of commitment to economic underdogs, and a willingness to stand up to corporate interests, so his climate approach would benefit wide swaths of the country.

In 2013, he and Sen. Barbara Boxer (D-Calif.), introduced a bill to tax carbon, rebate 60 percent of the revenue to families and use the rest for renewable energy, energy conservation, and to help fossil-fuel-dependent communities transition to a new economic foundation.

He introduced the "Keep it in the Ground" Act in November 2015, which would have banned all fossil fuel extraction on public lands, and offshore drilling in the Arctic and Atlantic oceans. And he has consistently opposed the Keystone XL pipeline and fracking.

The transition to a clean energy economy must reduce greenhouse gas emissions, and employ those who lose jobs in the obsolete fossil fuel industry, as well as those who have never had a shot at the American dream. That is not only the fairer way to go, but it is also the only way to build the sustained support needed to make the shift.

Trump's climate denial makes him unqualified to lead the country. Clinton's ambivalence and close ties to Wall Street and big corporations make her a less than optimal choice. Of the three, only Sanders has shown he will be consistent and decisive when taking on the crisis, and that his solutions will benefit all Americans.

Sarah van Gelder wrote this column for YES! Magazine. Sarah is co-founder and editor at large of YES! Follow her on Twitter @sarahvangelder.

Bernie Sanders' pledge to make the country more equitable and sustainable is more realistic than some people are letting on.

What's a Carbon Farmer? How California Ranchers Use Dirt to Tackle Climate Change

Scientists believe that simple land management techniques can increase the rate at which carbon is absorbed from the atmosphere and stored in soils.