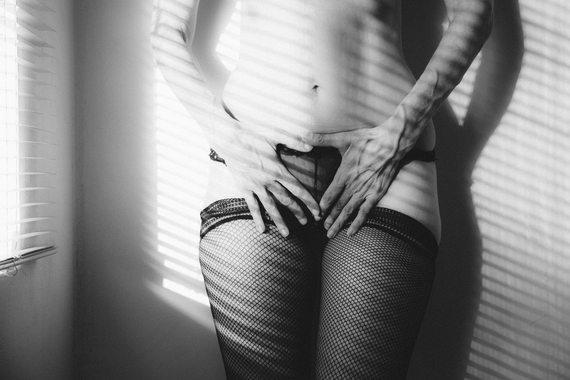 As much as I wanted to find deep love and great sex with the same man, I worried that I wasn't wired that way. And after a failed marriage at 50, I thought it might be too late to have that experience. With a "seize the day" mentality spurred by a physical, psychological, and spiritual deprivation I'd felt for years, I decided to explore my sexuality. If not now, when? I didn't know if I'd ever end up in another committed relationship, and I didn't want to deny myself sexual pleasure.

I took all my preconceived notions about what I thought a woman of my age "should" be doing in her personal life. I dated a lot. I dated men I wouldn't have considered dating earlier -- younger men, men from different walks of life. I asked myself "taboo" questions: do I want to be monogamous? Would I be happier in an open relationship? And if being if being in a non-exclusive relationship is the only way to keep sex exciting over the long haul, is that so wrong?

Over a two-year period, I explored my sexuality with an abandon and confidence I'd never known before. My experience ran counter to the conventional wisdom that women of a certain age are no longer sexual beings. In spite of the fact that I no longer looked like a young woman, I felt in some way more attractive to men than in my earlier years because of the appeal that experience brings.

Writing this blog helped me figure out both who I was sexually, and what I had to offer besides my sexuality. The two sides of myself that had once been unformed and separate came together. And then, ten months ago, after this personal evolution, I realized I was ready for something I'd never had.

Something I thought I was never entitled to have.

One morning, not long after I decided to be available for a different kind of relationship, I got Sam's email asking me how I'd been for the past 25 years. Our families had once been close, but Sam and I had lost touch a long time ago. We emailed prolifically for two weeks, then went on a date. And, since that first electric kiss, we've been inseparable. Sam made it clear that he would only be in a monogamous relationship, and I realized I had no desire to be with anyone else.

Before Sam, I had never felt firmly planted in a relationship. I always wondered if there was something "better" out there. This was a feeling I'd had since childhood: rootless, restless, perpetually searching for something I was never going to find until I fixed myself.

I left my hometown for college propelled by a "never look back" fury. I moved to Los Angeles and started a "do-over" life far away from my family. But the do-over didn't change my intrinsic restlessness and lack of connection.

Being with Sam has. Perhaps it's the family connection. Perhaps it's the fact that he went to college in my hometown and spent weekends in the house where I grew up, drinking iced tea in the backyard with my father, and talking about religion and philosophy. Where I had dark, obscure memories, his are radiant and rich with detail. Listening to his recollections, I recognized the good parts of my family and hometown and was able, finally, to internalize them.

Next week Sam and I are moving, along with my daughter, a cat, and a dog, into a Zen-like home tucked into a wooded canyon. We're planning monthly dinner parties, a Christmas card, and an addition to our family in the spring: another dog.

My relationship with Sam has changed me profoundly, and it has also changed my blog. I haven't written about my past sex life since Sam and I have been together, and since our intimate life is something just between us, I won't be writing about that either. My focus from now on will be broader, on aspects of sex and culture as they impact midlife women.

Home, for the first time.