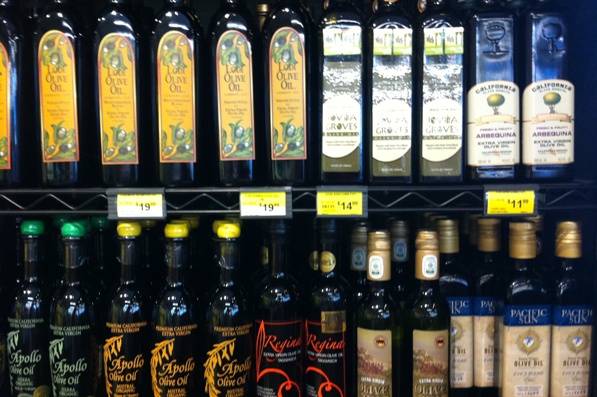 Have you ever wondered what exactly you're getting when you purchase a bottle of olive oil? Extra virgin? Pure?

"Pure," explains Dan Flynn of the University of California Davis Olive Center, "which is such a great word from a marketing standpoint, indicates to a lot of consumers that they're buying the very best olive oil. But in fact, it's a lower grade."

Extra virgin is the highest grade for olive oil.

Flynn, the olive center's executive director, and his associate Selina Wang, its research director, recently released a study called "Consumer Attitudes on Olive Oil." It revealed problems with consumers' notions of this product that would make lovers of great olive oil, or those knowledgeable about it, cringe.

Related: The Greek olive oil you should buy right now

Only one in four of us understands olive oil grades, the report found. Eighty percent cited flavor as an important factor in buying olive oil, yet earlier studies have shown that a majority of imported oils have off flavors or are already rancid. Rancidity negatively affects the human body by forming free radicals and depleting certain B vitamins. If you're using olive oil for your health, ingesting a rancid one will not bear the valuable antioxidants, omega-3 fatty acids and viable polyphenols.

Consumers also did not think that the terminology olive oil professionals used to convey positive attributes, such as "grassy," "peppery" and "fruity," made the product sound tasty. They were also confused by the term "refined."

"It doesn't mean elegant or high class," Flynn said. Typical of labeling that intends to mislead, refined means just the opposite. Refined olive oil has been processed with solvents to mask off odors and flavors. This do-over is done because the oil might have started out with olives of questionable quality, or it's a blend of low-grade oils gushing around the Mediterranean from Turkey, Greece or Spain, or it's been cut with other oils, such as hazelnut or safflower. In these cases, that's all got to be covered up.

Wang designed the consumer study. She is originally from Taiwan, where olive oil is not so familiar. "It probably took me several months to figure out all the terminology and nomenclature," she said. "It's very confusing."

The conclusion is there is much work to be done to better communicate what's in the bottle instead of focusing on devising language that masks unscrupulous practices.

So how do you read an olive oil label to make sure it's the best extra virgin you can afford?

There are six things to do. With advice from Orietta Gianjorio, a UC Davis Olive Oil Taste Panel member who grew up in Rome and is familiar with these terms we've inherited from Europe, here are some clues about how to read a label. In general, look for the term extra virgin. But don't take it for granted.

Turn the bottle over. Where is the oil from? Just because it was packed or produced in Italy doesn't mean the oil's Italian. Oils come from all over the Mediterranean -- Tunisia, Spain, Greece and Turkey -- to Italy just to be packaged. That's a lot of traveling. To impress you, the label may even brag that the oil has come from many countries. But now that you're becoming an expert, you'll know that the longer the time between harvest and processing, the better the chance the oil has of degrading.

Look for the harvest date. Remember that olive oil is the opposite of wine. It is not meant to age. Think of it as fresh fruit juice. Olive oil is good for about two years if stored in optimum conditions, which means in a dark, room-temperature cupboard. "If the back of the label doesn't have the harvest date, you may consider putting that bottle back on the shelf," Gianjorio advised.

Look for seals of approval. Many California olive oils are sent, for a fee, to the California Olive Oil Council's panel of trained tasters. If the oil passes, the producer is given permission to place the COOC seal on the label. Most often, this is placed on the back of the bottle. However, many fine California oils from small producers are never sent to the COOC because of costs. Usually, these bottles show a harvest date.

Take it back. "This is America. You take everything back," Gianjorio said. Tell the store manager that the oil is rancid and return it. If the manager is unable to lead you to a better product, find a shop that specializes in fine olive oil, or look for good olive oil online.

Favor domestic oil. First, this is not an us vs. them: There are high-quality producers all over the world. Olive oils made in the U.S. consistently score higher in quality than imports. California furnishes 97 percent of the olive oil produced in the U.S. If there's a shorthand way of looking for quality, reach for olive oil from the Golden State.


Deciding which olive oil to buy

The perfect sauce: A tomato and olive oil emulsion

Avoid rancidity: How to keep your olive oil fresh

In A Battle Of Famous Scrambled Eggs, Which Chef's Technique Is The Best?

‘Knowing How To Cook Was Actually My Lifesaver In Jail’