As an avid runner new to New York, running in Central Park has become a constant conversation topic for me. My colleague Shi Liu recently mentioned an interesting phenomenon: in the morning, runners seem to be a lot more physically in shape than runners in the afternoon. Reporting on her experience running at various times, Shi (a keen and ambitious average runner) reported feeling demotivated but running faster in the morning and feeling more motivated but running slower in the afternoon. Notwithstanding differences in her physiology, we both wondered: What gives rise to her disparate feelings? Why does she feel worse when she is performing better but better when she is performing worse? And more importantly, how can she feel better and run better?

Here, I argue that reference groups, or whom we compare ourselves to, can be a powerful influencing force that affects both our emotions and our performance. Rather than just reacting to the forces of reference groups imposed upon us, I believe that developing a good understanding of the impact of reference groups can be advantageous. Additionally, by selecting multiple reference groups within the same environment, we can create our own set of comparisons to proactively create situations in which we can achieve greater levels of both performance and satisfaction.

The environment matters in our comparisons of ourselves to others, which have important psychological consequences. This tendency has even permeated our use of language, reflected in such idioms as 'keeping up with the Joneses' and 'the grass is always greener on the other side'. In my own experience, walking down Fifth Avenue in New York (with one of the highest median incomes in the country) can leave me feeling like an impoverished grad student, whereas roaming the streets of the South Bronx (with one of the lowest median incomes in the country) instills feelings of humility and gratitude for the regular income provided by my stipend. In a similar vein, a recent study showed that the body type of a dining partner or people dining nearby influences how much we serve ourselves and how much we actually eat. In particular, in the presence of an overweight diner, we are more likely to serve ourselves and eat more unhealthy foods and fewer healthy foods.

Likewise, consider this example from the Houston airport: Some years ago, passengers were frequently complaining about the long waits at baggage claims. Even when the airport executives increased the number of baggage handlers, thus reducing the average wait to just eight minutes (well within industry benchmarks), the number of complaints did not wane. A more in-depth look revealed that because the walk between the gate and the baggage claim was very short, passengers waited for roughly 88 percent of their time in the airport. In response, the airport increased the length of the walk by moving the arrival gates away from the main terminal and routing bags to the outermost carousel. Complaints dropped to near zero, as the occupied time (walking to baggage claim) felt shorter than the unoccupied time (waiting at baggage claim). Clearly, how the makeup of our environment is designed influences whom we compare ourselves to (whether other waiting passengers, overweight diners, or individuals with higher/lower incomes). But is there a role for agency? What can we do to influence how we feel in different environments?

How we perform and how we feel about our performance largely depend on what we infer adequate behavior to be in different contexts. However, the environment is not the only determinant of what we judge adequate behavior to be -- our attention to what is 'good' and what is 'bad' behavior is also critical. For example, in one study, Bob Cialdini and colleagues found that seeing other people litter in a dirty environment increased individuals' likelihood of littering because it provided them with a justification for why littering in this context is acceptable ("If she does it and everyone else seems to do it, it must be fine for me as well"). However, when individuals' attention was drawn to someone else littering in a clean environment, thus revealing a violation of the norm, individuals were less likely to litter than in a clean environment without anyone littering. That is, when deciding whether to litter after observing someone else littering in a clean environment, individuals were more likely to have the social norm at the front of their mind and thus acted more in line with it. In sum, though the environment can influence which reference groups we choose, it is whom we ultimately focus on in the environment that significantly affects how we behave and feel about our behavior.

The company Opower utilizes this phenomenon, namely that both our environment and whom we focus on in our environment can drive our reference groups and subsequently our behavior and feelings. Opower provides consumers with 'Home Energy Reports', which present their energy usage in comparison to two groups: their 'average' neighbors and 'efficient' neighbors. In providing these references, individuals can assess how much they are consuming and set expectations for what constitutes 'good' behavior based on their efficient neighbors. Similar to the running example, being compared to a more efficient group can motivate behavior, driving individuals to save more energy. At the same time, Opower aims to minimize the negative impact of this experience by providing a social comparison to another group, or average neighbors. When individuals perform better than this group, they receive positive confirmation in the form of a smiley face with the word 'Good' printed in green. Thus, upon receiving the Home Energy Report, individuals' attention is drawn to both what 'good' behavior constitutes (the efficient neighbors' behavior) and the possibility of a positive comparison (with the average neighbors). 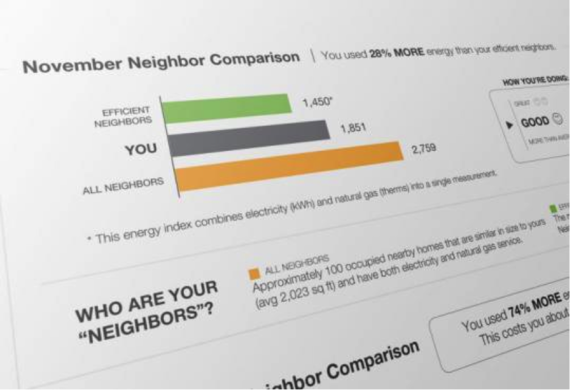 Though the environment can have a major influence on our behavior by pre-selecting which reference group we compare our behavior to, there are always multiple possible reference groups available to choose from. By being aware of and consciously guiding our attention toward other, less-apparent possible references, we can guide our behavior and feelings. That is, if our aim is to motivate our performance, we should select a reference group whose performance is better than our own, even though this can induce negative feelings. Likewise, if our aim is to improve how we feel, we should select a reference group whose performance is worse than our own, even though this can weaken our performance. As an alternative, I propose that we adopt multiple reference groups, one above and one below, to offset the negative consequences of selecting either. In this way, instead of just reacting to externally imposed reference groups, we can have far more autonomy over shaping our own reference groups. For Shi, my colleague in the opening example, this could mean looking for the fewer low-performing runners while running in the morning and focusing on the fewer high-performing runners while running the afternoon. Rather than seeing the forest for the trees and inferring that good behavior is based on what the environment and the people in it draw our attention to, I believe that we can focus our minds to see the trees for the forest, recognizing that multiple reference groups exist and selecting those that can help us achieve the best emotional and performance outcomes.