The Journal of Consumer Research reported a recent trend that many consumers are attracted to "unusual and novel consumption experiences" and choose vacations, leisure activities, and celebrations that are predicted to be "less pleasurable and enjoyable."

For instance, ice hotels, where a visitor sleeps on a bed of ice, are becoming increasingly popular. If you so desire, a travel company Untraveled Paths Limited, can organize a trip for you to the Ice Hotel deep in Făgăraş Mountains, Romania, where bedding furs and special sleeping bags are provided.

Perched next to Bâlea Lake at an altitude of 2034 m., this vacation destination is only accessible via cable car. Each year, typically in October, once the lake freezes, local craftsmen harvest ice blocks to erect a 10-room Ice Hotel and its adjacent Ice Church. They artfully embellish the structures with sculptures inspired by Romanian-born Constantin Brancusi. The hotel is completed sometime in December and is open until it melts in late April or early May.

Do experiences like sleeping on a block of ice aid in our understanding of ourselves, our environment and of ourselves scaled to our environment? Is it about searching for and finding a perverse thrill or choosing and pursuing lessons that can only be learned in a hostile and demanding environment which allows almost no margin for error?

What is the distinction? When we are trying to find that "something" we are looking for, we are not creating it; it must already exist, sitting there, patiently waiting for us, no? On the other hand, when we are choosing and pursuing, we are constructing that "something" investing energy and effort into its creation. 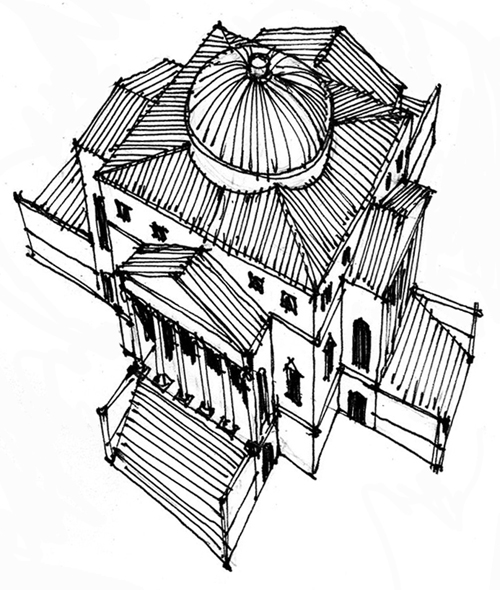 Possibility of Ideal. Andrea Palladio believed the essential role of architecture to be an organic metaphor of the world in all its harmony; he called it the "machine of the world" and wanted to reproduce its structure and motion. Palladio wrote: "...indeed, if we consider this beautiful machine of the world, ...the little temples we make, ought to resemble this very great one."

Pursuing Ideal. Palladio aimed to design buildings in perfect harmony with nature, and Villa Rotonda, unburdened by functional demands of a farm house, took the purity of Palladio's vision to its peak. It was commissioned by Paolo Almerico, a highly esteemed man of the church who had returned from the Vatican to his native city of Vicenza to retire. The Villa was intended as a place for otium and entertainment.

Possibility of Failure. Palladio employed symmetry as a unifying device in his pursuit of perfection. To fuse all parts of the Villa into a unified whole, the architect wrapped the domed central space with four identical projecting porticos. However, Palladio's attempt to do away with front or back and to merge four distinct sides of the building into one harmonious experience could only be achieved in theory. In practice, it was impossible to take in all of the different views simultaneously.

Creating Ideal in Reality. Furthermore, it was impossible to make all four facades the same, as "ideal" plan intended, because of terrain. Necessary modifications in the frontal planes, in the width of steps, and retaining walls had to accommodate varying context. As a result, although completely congruent in appearance, each surface of the perimeter had to be "balanced" individually.

Palladio chose to pursue the ideal by addressing existing limitations. To me, this serves as yet another proof that even though we can't determine ahead of time the exact course for us to embark on, we have to embark on a course. The only way we would be able to discover if we are making progress toward a set goal is by going ahead.


More:
healthy livingArchitectureice hotel
Newsletter Sign Up
The essential guide to taking care of your mind and body
Subscribe to HuffPost’s wellness email
Successfully Subscribed!
Wellness delivered to your inbox