When my brothers and I were little, our sibling hunt occurred on the morning of Easter Sunday.

We'd spend the day or two before dyeing real eggs with our parents, using the clear crayon to draw little messages, smiles and flowers -- and as we got older, we began writing things like
"boner" and drawing nipples on the tops of the eggs.

I don't know, I guess sometimes boys will be boys.

Each year, we would expect EB to give us a real challenge and hide the two dozen eggs in different places than before.

We would inevitably come up short, spending Sunday afternoon and the days following literally walking on eggshells looking for the missing egg, until my dad would stuff his foot into a house slipper, releasing an ungodly sulphur bomb as well as a few choice words.

We had other "hunts" surrounding the Easter holiday, sometimes at the church or local firehouse -- and while an attempt was always made to keep them organized and somewhat ruly, my mom reminds me that these functions have always been a circus. Instead of a lazy skip and a hop through the grass with your dainty Longaberger basket, she compared it to the running of the bulls in Spain. Bodies flying every which way, kids knocking heads trying to go for the same prolate spheroid, the parents standing on the sidelines chatting and exchanging proud smiles.

I felt like back then there was some sense of etiquette, no?

Last weekend, my wife and I took our three kids (5, 3, 1) to our neighborhood Easter Egg Hunt, which also included multiple craft tables and some delicious snacks (it was incredibly well organized). As with most "hunts," it was broken into different age groups, so that the kids have fair competition in finding their eggs. Parents were asked ahead of time to drop off 12 loaded plastic eggs per each one of their children who were hunting and a small group of volunteers happily took up the job of hiding them at different intervals.

Parents and their kids were instructed of this, as well as the fact that each age group should be on the look-out for one silver egg and one golden egg. These were loaded with a special ticket that you could redeem for a stunning basket, packed to the hilt with Peeps, chocolate bunnies, candy and jellybeans -- an incredible incentive and every kid's dream.

My wife and I helped our 1-year-old pick up his very first eggs, because that's what you do for them. At that age, they don't really have the dexterity, motor skills or mental fortitude to understand what they're supposed to be doing. There were a host of parent's with zoom lenses flung over their shoulders, documenting another 'first' in their child's life -- a very cute scene.

We also observed our 3-year-old, who was in the same age group (0-3), but we didn't really need to help him. He understood that he could pick up 12 eggs and that he should keep an eye open for that special prize.

After they were done, my wife decided to stay inside the community clubhouse with the boys, as it was a frigid 37 degrees outside. I wanted to watch our 5-year-old daughter, as she went out with a host of kids in the 4-6 age group. 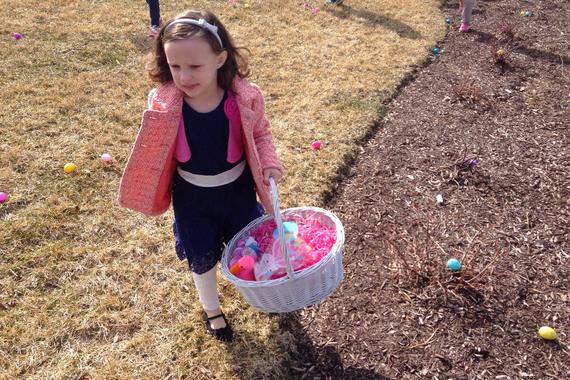 In my opinion, these kids completely understood what they were supposed to be doing and as parents, I feel like our only responsibility is to stand on the sidelines, perhaps take a few pictures and double-check to make sure that our kids don't exceed their allotted amount to keep everything on the up-and-up.

I was enjoying myself, watching the excitement on the faces of my daughter and the other kids as they ran around, yelling and cheering as they found an egg in an odd place or one stuffed with their favorite mini candy bar.

It was fun, until one particular mom came roaring out of the pack.

I had noticed the "golden egg" several minutes beforehand, and could've very easily tipped my daughter off to it's location, but I chose not to, because I was practicing a little thing called etiquette.

For a nearly 40-year-old man to step in and take that element of the unknown and excitement away from another child seemed wrong to me. But not for that self-centered, inconsiderate helicopter mom, that felt the need to run and coach her 6-year-old directly to the prize, not even bothering to pick up any regular eggs along the way.

And then, to stand there after the fact, joking about how your daughter got the only golden egg, seriously put a wrinkle in my Hanes.

Do you think that you're doing your kid any favors? Did you even stop for a second to consider what you were doing?

Don't you think you would've experienced an emotion so much more genuine, had you allowed your daughter to explore and achieve a magical discovery on her own?

Perhaps I speak for a minority, but personally, I want my children to experience some degree of independence. I want them learn about success, failure and healthy competition.

Maybe I'm putting too much weight on this, but where do we draw the line in helping our kids? Right now it's only the golden egg at an Easter egg hunt, but what's next?

Do your kid a favor, step back and let them fall down, get back up and figure it out -- that's what it's all about.

This post originally appeared on Adrian's blog "Dad Or Alive". His memoir from Penguin Publishing about the first year of being a stay-at-home dad is available now.