ENGLEWOOD, Colo. (AP) — Miami Heat forward Chris Andersen was the victim of a wide-ranging Internet hoax that resulted in a raid of his Denver-area home last year, his lawyer said Wednesday, and prosecutors confirmed Andersen was cleared of wrongdoing in the "extremely complex" case.

Lisa Pinto, spokeswoman for the 18th Judicial District Attorney's Office, told The Associated Press that the office is reviewing a 4,000-page report before charging decisions are made, but added that "based on the information that we have been able to obtain and analyze, we are not pursuing charges against Chris Andersen."

Andersen's lawyer and agent, Mark Bryant, said his client was duped by a woman in Canada who sought a relationship and gifts and who threatened a female acquaintance of Andersen's in California while impersonating the tattoo-covered fan favorite known as "Birdman."

"Chris was a victim," said Bryant, adding it was his understanding that the investigation uncovered at least a dozen people across several other states who were duped by the same woman who's been charged in Canada.

Although she was arrested in January, her connection to Andersen's situation didn't become clear until recently, Bryant said.

Sgt. Line Karpish, a spokeswoman with the Royal Canadian Mounted Police, said Douglas County, Colo., authorities requested assistance on the case in May 2012, and that investigation led to the January arrest of Shelly Lynn Chartier, 29, of Easterville Manitoba.

Chartier was charged with possession and transmission of child pornography, extortion and utter threats, Karpish said. Her next court appearance is Oct. 22.

"It would be premature for us here at the 18th Judicial District Attorney's Office to discuss this case before filing charges," Pinto said. "We are looking at 4,000 pages of information in relation to an investigation that is extremely complex. The Douglas County Sheriff's Office has conducted a highly sophisticated investigation where they have crossed state lines and international borders to obtain evidence and pursue the truth in this case. We will announce our findings in the near future after a careful review of the evidence."

In May 2012, Douglas County Sheriff's detectives searched Andersen's Larkspur home as part of an ongoing investigation by the department's Internet Crimes Against Children unit.

Although Andersen wasn't arrested or charged, the Denver Nuggets, in the midst of a playoff series against the Lakers, excused him from all team-related activities. That offseason, they released him under the NBA's amnesty clause.

Andersen, 35, signed with Miami last winter and helped the Heat win their second straight NBA title, after which he signed a one-year deal to return this season.

"I want to thank the Miami Heat organization for reaching out and believing in Chris probably more as an individual than as a basketball player," Bryant said. "That embrace assisted him in this difficult time and to that organization and to the fans around the world that stood behind him, his deepest thanks."

The Heat released a statement saying, "We are not surprised that this is the end result. We are happy for Chris and glad this unfortunate incident is behind him."

Bryant said Andersen will continue to cooperate with investigators and prosecutors "as they seek justice for all involved." He said he didn't believe any of the other alleged victims were celebrities or sports figures.

With his reputation tarnished, Andersen had to halt his numerous appearances for children's charities until his name was cleared.

"I can't tell you how much Chris agonized about the label placed on him and some of the public's perception that resulted from these acts," Bryant said. "Chris among all things is a member of our community and has a long, documented history of reaching out to children. He's done this through assisting with children's camps, local orphanages, literally (dressing up as) Santa Claus in our community."

Bryant said Andersen, who didn't release a statement, told him he appreciated those who reserved judgment and stood by him as he professed his innocence.

As for Andersen's acquaintance in California, "that individual here is also a victim," Bryant said.

Bryant said the young woman from California flew to Denver to see Andersen, "but again, that liaison was set up by the individual in Canada. (The young woman) came here and they spent time together and left. What transpired after that we believe was a threat from the individual in Canada, presuming to be Chris Andersen to that individual. And that threat subsequently led to the warrants that were executed on Mr. Andersen's house — although they had nothing to do with Chris."

The young woman was 17 at the time, which is the age of consent in Colorado.

"There was no crime committed in Colorado," Bryant said. 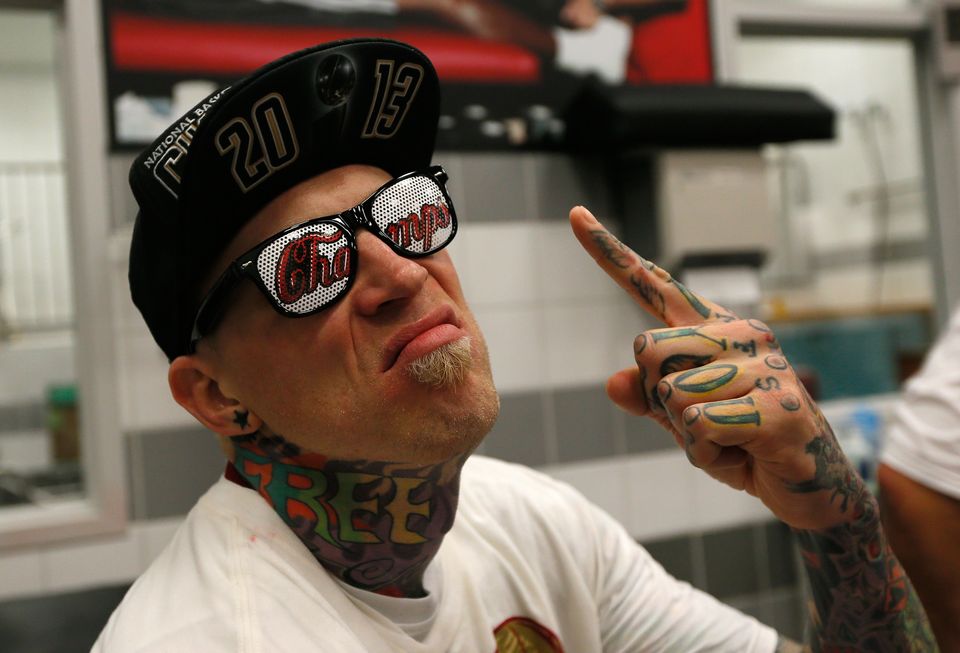 1 / 54
San Antonio Spurs v Miami Heat - Game 7
MIAMI, FL - JUNE 20: Chris Andersen #11 of the Miami Heat celebrates after defeating the San Antonio Spurs 95-88 to win Game Seven of the 2013 NBA Finals at AmericanAirlines Arena on June 20, 2013 in Miami, Florida. NOTE TO USER: User expressly acknowledges and agrees that, by downloading and or using this photograph, User is consenting to the terms and conditions of the Getty Images License Agreement. (Photo by Kevin C. Cox/Getty Images)
Getty Images