After weeks of speculation, Chris Brown has finally spoken out about his relationship with girlfriend -- or shall we say ex-girlfriend -- Karrueche Tran.

The singer has revealed the pair has in fact split and that it has something to do with his relationship with Rihanna.

“I have decided to be single to focus on my career. I love Karrueche very much but I don’t want to see her hurt over my friendship with Rihanna," Brown tells HollywoodLife.com. "I’d rather be single allowing us to both be happy in our lives.”

Brown and Rihanna have been spotted together the past three nights in NYC, sparking rumors the former couple were rekindling their highly publicized romance. On Monday, Oct. 1, they were caught "hugging and kissing" at nightclub Griffin. Then on Oct. 2, the pair reportedly met up again at 1Oak. And last night, Oct. 3, Brown and Rihanna left the Gansevoort Hotel (minutes apart) and were spotted at Jay-Z’s concert at the Barclays Center -- where Brown put his arm around his ex and cozied up to her throughout the night.

Elliott Wilson, a music industry journalist who was at Jay's concert, spotted Brown and Rihanna entering Barclays, and tweeted, "Me thinks Rihanna just entered the VIP with Chris Brown. Wow." He then posted a photo on Instagram of the pair cuddled up at the show, writing, "Breezy. Rih Rih."

And last night, RiRi tweeted, "Tough times don't last.... But tough people do!!!" And Brown also weighed in, posting, "Both r Free from it all!"

We don't know about you, but it definitely sounds like these former loves are already back together.

UPDATE: Allegedly, Tran feels betrayed by Brown and insists that he and Rihanna are not "just friends." Multiple sources tell TMZ that Tran truly loved Brown, even though she was suspicious of his distant behavior recently. She had a feeling he was cheating on her with Rihanna.

Check out the photo Wilson posted of Brown and RiRi: 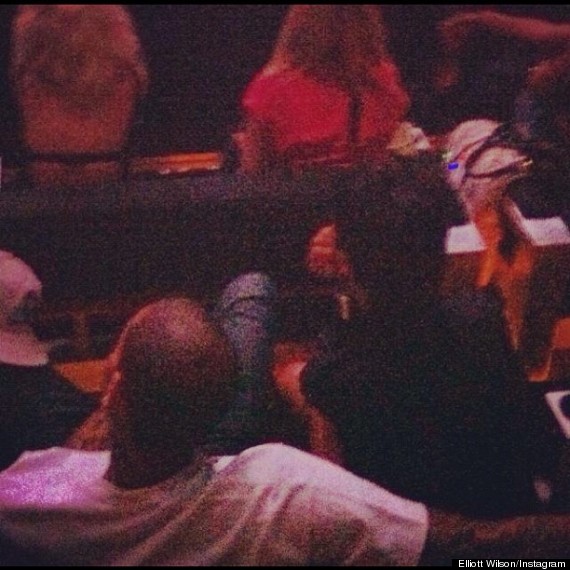