This article is the sixth in a six-part series about the drug war and police reform. Read Part 5 here.

In November 2011, a homeless man estimated to be in his 40s was found dead in a tent at the Occupy encampment in Salt Lake City's Pioneer Park. He died from a mix of a drug overdose and carbon monoxide poisoning from a portable heater. The incident prompted city officials to determine that it was no longer safe for the protesters to camp in the park overnight.

Salt Lake City Police Chief Chris Burbank, 46, was in charge of the eviction. But Burbank took a decidedly different approach from his counterparts in other cities who used aggressive, confrontational measures to oust their own Occupy encampments.

Burbank showed up at the camp and talked to the protesters, in some cases one on one. He explained that they'd need to start leaving the park at night, although they could come back during the day. He said that when the time came for them leave, they could do so peacefully, or they could choose to be arrested. He even asked them how they'd like their arrests to take place, in case they wanted the TV and newspaper cameras to photograph them giving themselves up for their cause. 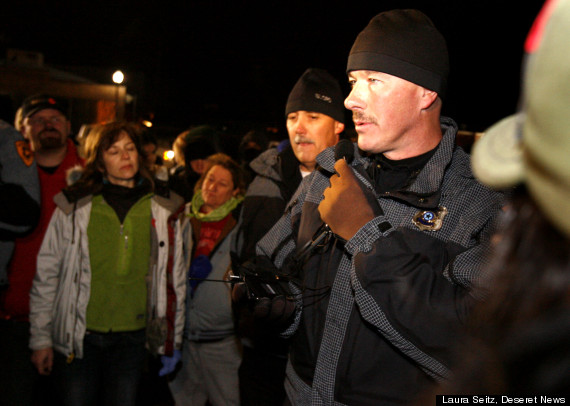 Burbank also dismisses the idea that his approach could only work in a smaller city like Salt Lake. "I think it should be applied everywhere. That's exactly how we as a nation should approach these events. We should approach it asking, 'How can we best facilitate these people's free speech?' Putting them nine miles away from whatever they're protesting doesn't allow them to get their message across.

"Doing it this way takes extra time, and sometimes you take a little criticism from your officers," he says. "But if my officers feel unsafe, that's when it's my responsibility as chief to show up personally."

The path Burbank took to his position is as unconventional as his approach. Policing is often a family tradition, sometimes spanning several generations, but Burbank wasn't born into a family of cops. His parents were both ballet dancers, and his grandparents were in the theater. He traveled world with both.

"I think that has been the single biggest influence on how I approach my job," he says. "The diversity that my parents and grandparents exposed me to was really important. They had friends of all races, friends who spoke different languages, gay and lesbian friends. I was exposed to different cultures and people of different nationalities at an early age. And that often meant staying in their homes."

While staying with a Muslim family in Pakistan as a teen, Burbank learned to play squash. He toured as a professional squash player for seven years and was one of the top ranked players in the world before he finally decided to become a police officer.

"I had a family to support. Professional squash isn't the most reliable way to make a living," he says. He joined the Salt Lake Police Department in 1991, then rose through the ranks until he was appointed chief in 2006.

Burbank has won praise -- and some scorn -- for his positions on various issues, including on immigration. He vocally opposes using local and state police to enforce immigration law, and in fact has barred his own officers from questioning Salt Lake residents about their immigration status. In testimony before Congress in 2010 (PDF), Burbank explained that it's impossible for police officers to look for and detain possibly undocumented immigrants without the use of racial profiling, and without subjecting Latinos who are U.S. citizens to unnecessary harassment.

Last July, Burbank weighed in on the issue of police militarization during an interview with the Deseret News. He said he worried that police were becoming too aggressive and too willing to use force.

“We’re not the military,” Burbank said at the time. “Nor should we look like an invading force coming in."

His comments came as editorial boards, columnists, and readers were still weighing in on a deadly police raid on the home of Matthew David Stewart, the death of Danielle Willard at the hands of two police officers and a scandal within the West Valley narcotics unit.

"It's unfortunate that an officer was killed," Burbank says of the Stewart raid. "But we need to take a look at their approach. Could we do it a better way? It should never be the goal to write a no-knock warrant. As police officers, our goal should always be to use the lowest possible level of force to fulfill our responsibilities. In a case like that, I don't know why you can't wait and just stop them as they walk out the front door."

Since the Stewart raid, a group of reformers have been pushing for legislation that would limit the use of forced-entry raids. Burbank said that he's gradually implementing a similar approach in Salt Lake City.

"I spent eight years on the SWAT team. I've served hundreds of no-knock warrants. I know firsthand how it all operates," he says. "I also know firsthand that there are better alternatives. Too often we start with the highest level of force. We should always start at the lowest level. If the police show up and the situation deteriorates, then that's our fault. We haven't done our job right. I think we get too caught up in the whole officer safety thing. The danger you expose everyone to in these raids is significant."

Burbank points to an incident in January in which police and federal officials were pursuing two women suspected in a string of bank robberies. One of the women, Kelly Fay Simons, was apprehended by the Joint Criminal Apprehension Team, a fugitive task force made up of U.S. Marshals and cops from law enforcement agencies around the area. Simons was killed when, according to officers on the JCAT team, she drove her truck at them.

Burbank had recently pulled his department out of the JCAT program because he believed the team's tactics were too aggressive. The day after Simons' death, Burbank's own officers located her accomplice, Sandra Chotia-Thompson, and convinced her to turn herself in without incident.

"Again," Burbank says, "we should be asking, what's the least amount of force we can get away with here, and still be safe?"

As for the service of drug warrants, Burbank rejects the conventional wisdom held by so many police departments around the country that aggressive raids make the process safer for everyone. He says the goal in drug investigations should be about improving quality of life and making neighborhoods safe, not necessarily making arrests and racking up convictions.

"Let's say you have neighbors complaining about a drug house on the corner," he says. "They don't feel safe. It's a menace. Now, you could do a long investigation, culminating in a big raid. But in the meantime, the neighbors still have to live with the menace. Why not just send two uniformed cops to the house that same afternoon? They knock. They say, 'Hey. Knock it off.' The drug dealers pick up and leave. No guns drawn, no raid. Which approach will have a more immediate effect on the neighborhood?"

He adds that the latter approach is also less likely to get someone killed -- whether a cop, a drug suspect or a bystander.

Burbank worries that police today get too much training in how to use different types of force, but too little training in conflict resolution.

"I have two goals in policing. First, we need to humanize our police forces. We aren't an occupying force. We are a part of the community. And we need to understand that to do our jobs, we sometimes need to expose ourselves to a little bit of risk. Otherwise we end up doing our jobs out of paranoia, not out of dignity and respect for the community," he says.

"Second, no bias in what we do. We need to recognize that we have emotions, and learn to dial that back a little bit. One of the most important traits in a good police officer is empathy."

HuffPost writer and investigative reporter Radley Balko is the author of the new book Rise of the Warrior Cop: The Militarization of America's Police Forces.