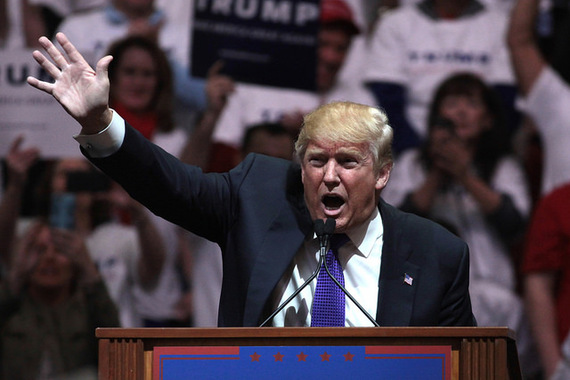 Chris Christie threw a monkey wrench in the race for the Republican nomination when he endorsed Donald Trump last week. Since then, six New Jersey newspapers have put out editorials calling for Chris Christie to resign as governor. The editorial boards wrote that they're fed up with his "arrogance," "opportunism" and "hypocrisy."

As much as I wanted to be shocked that Donald Trump received an actual endorsement from a high-profile politician, Chris Christie's decision did not surprise me in the slightest. Christie and Trump take the exact same approach to leadership: bully, yell, swear, insult, and don't even make an attempt to be diplomatic.

And there is an important lesson to be learned from the similarities between these two men.

Chris Christie ran for governor of New Jersey in 2009 as an emblem of change. He promised to be a different kind of leader--one who was above partisan politics, who would never take money for political favors, who would stand his ground in the face of his enemies, and who, most importantly, would "tell it like it is." He managed to garner more and more popularity with his overt bullying tactics, such as telling a school teacher he had no interest in answering her question, and using a megaphone to yell "Get the hell off the beach!" at beachgoers before Hurricane Sandy hit.

Trump is currently selling voters the same product that Christie was selling in 2009: authenticity. And people are buying it. Trump supporters hail the business tycoon for "speaking his mind," turning off all his filters and "telling it like it is." They think he would make a great president because "he won't take any crap from anybody." In a sea of politicians who spout carefully prepared sound bites and clichés from party rhetoric, the off the cuff insult-throwing, PC-defying Trump has convinced his supporters that the Donald they see is the Donald they get.

But here's the lesson that New Jersey learned from Chris Christie: authenticity can be faked.

Christie soon revealed that he played the political game just like everyone else. He compromised the principles he professed to hold in order to advance his own interests. After slashing the state budget in his first term, Christie proved to be a complete hypocrite when he called for a $24 million special election to fill Frank Lautenberg's senate seat just three weeks before the NJ gubernatorial election, so that he would not have to risk sharing the ballot with Cory Booker--who would certainly increase Democratic turnout--on his reelection day. When asked about the cost of the special election, Christie said, "I don't know what the cost is and I quite frankly don't care."

This was just the tip of the ice berg, as the press began to unravel the Christie scandals throughout his second term. The man who was above cronyism got a lot of expensive benefits in exchange for what appeared to be political favors. The man above partisan politics made some very political moves in New Jersey to gain favor in important primary states like Iowa. And the man who "tells it like it is" gave some very convoluted justifications for these decisions.

Actions speak louder than words. This is what Trump supporters have yet to realize. Trump is a rather talented performer, able to convince people that he's genuine by telling lies with an aggressive and committed delivery. But that's all he is: a performer. He sells the same type of "realism" that reality television sells us. But reality television is scripted. Doesn't everyone know that by now? I feel sorry for people who don't, because they must have a very twisted view of what "real" people are like.

Donald Trump will go the way of Chris Christie. His guise of authenticity will implode sooner or later. His supporters will abandon him when they realize that not only is he playing the political game, he has mastered it, and his followers are the biggest victims of his ruse.

Donald Trump will go the way of Chris Christie. I just fear that it won't happen soon enough.