Gov. Chris Christie (R-N.J.) probably isn't having the 2015 he hoped he would. A poll released Monday finds that Christie's job approval rating has fallen to a record low among New Jersey voters.

According to the Quinnipiac poll, only 38 percent of New Jersey voters approve of the job Christie is doing as governor. This represents an 8-point drop from January, as measured in an earlier Quinnipiac poll. A majority of voters expressed disapproval of Christie's handling of education, the economy and the state budget.

Christie's approval score on this new survey is the lowest he has received on the Quinnipiac poll while he's been in office, and the lowest approval rating for any governor in the nine states Quinnipiac has surveyed this year.

In the poll released Monday, just 35 percent of New Jersey voters said they have a favorable opinion of Christie -- down from 42 percent in January, and down even further from his all-time high of 69 percent in March 2013.

Other pollsters in New Jersey have measured the same downward trend for Christie, including a Rutgers-Eagleton poll released earlier this month that showed Christie's job approval rating at 41 percent. The governor's ratings declined between 10 and 15 percentage points in late 2013 following the first disclosures of the so-called "Bridgegate" scandal, and the downward trend has continued over the past year. 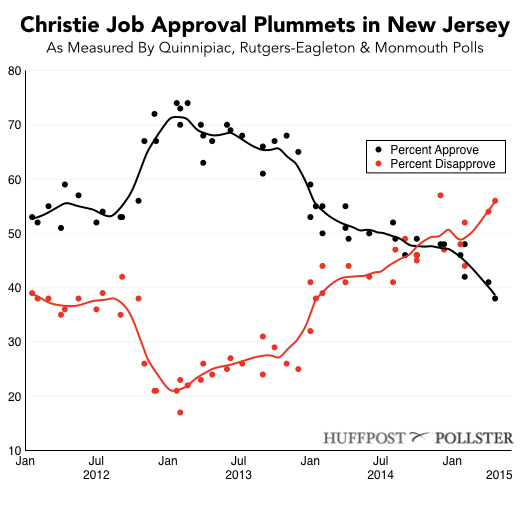 These results do not bode well for Christie as he considers a presidential run. Only 33 percent of voters in his home state say they want him to run for president, while 64 percent are against it. An even lower share of New Jersey voters -- 29 percent -- think Christie would make a good president, a 7-point drop from January. A majority of New Jerseyans say they do not find him honest and trustworthy.

Still, 22 percent represents a low level of home-state support for a candidate. According to HuffPost Pollster, which aggregates all publicly available polls on elections, only 5 percent of Republicans nationwide say they would vote for Christie in the primary.

The Quinnipiac poll surveyed 1,428 New Jersey voters via live interviews on landlines and cell phones between April 9 and April 14.