After buying an older home, it's possible to discover some forgotten treasures that the former owners left in their wake. But Woodland Hills, California residents Chris and Colleen Otcasek were in for a much bigger surprise than most. Although the couple already knew that there was an underground bunker on their property, they had no idea what the nuclear fallout shelter contained -- or that it was so well-preserved. “I didn’t expect it to look like this,” new owner Chris Otcasek told CBS Los Angeles. “I guess I just figured it would be like a hole.”

Nuclear engineer Alvin Kaufman installed the shelter in 1961 fifteen feet below ground to protect his family from radiation in the case of a nuclear attack. Inside, the Otcaseks found sleeping bags, a water tank, coffee cans and canned food in addition to products like Dixie cups, paper towels, Saran Wrap and Kleenex, all in their original (now vintage) packaging. Science fiction magazines, board games and a thirty-year calendar were also inside. 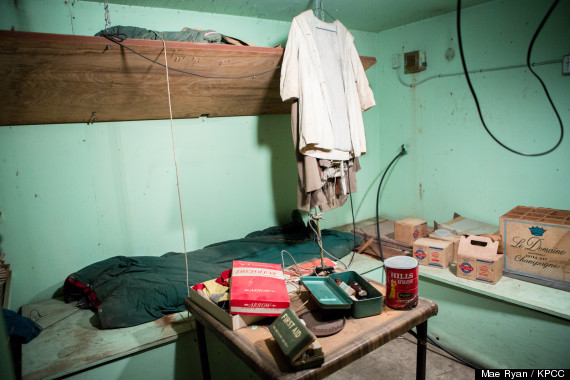 "In that era, in the 60s, there was a much greater fear and feeling that a nuclear war was possible," Kaufman's daughter, Debra, who grew up in the house, told CBS Los Angeles. Oddly enough, this isn't the first preserved, fully-stocked fallout we've come across from that era. The Zwick family in Neenah, Wisconsin recently discovered a similar selection of goods while exploring their own yard.

Southern California Public Radio featured extraordinary photos of the contents in the slideshow below.

The Most Popular Shows On Netflix Right Now Besides 'Sex Education'