Los Angeles Police Department told reporters that no body has been identified in the cabin in which Christopher Dorner was believed to have been hiding, following a shootout and fire.

Earlier reports had indicated that a body had been identified.

The standoff with Dorner, a former member of the LAPD, reached a violent close near a rustic cabin in the Big Bear ski area east of Los Angeles. Since Feb. 3, he's accused of a crime spree that left four people dead, including two officers, and several others wounded in shootings in L.A. and nearby San Bernardino County.

In a widely read tirade posted on Facebook by Dorner -- called his manifesto -- he vowed revenge against police and other officials he blamed for his dismissal from the LAPD in the 2009.

On Tuesday afternoon, Dorner barricaded himself in a rustic cabin after San Bernardino County Sheriff's deputies allegedly spotted him driving a vehicle he'd stolen earlier in the day.

While in the cabin, Dorner exchanged hundreds of rounds of gunfire with members of law enforcement. One deputy died from the shooting and another was injured. Later, towering flames engulfed the cabin.

The country's most famous fugitive had eluded authorities for days, but resurfaced on Tuesday after he'd allegedly burglarized a home, took two women hostage and stolen a white pickup truck.

"Enough is enough. It's time to turn yourself in," said LAPD Commander Andrew Smith during an afternoon press conference. "It's time to stop the bloodshed."

Dorner's trail led back to Irvine on Sunday where police believe he shot a couple parked in their car.

Monica Quan, a California State University, Fullerton assistant basketball coach and her fiance, Keith Lawrence, a public safety officer at the University of Southern California, were shot to death in their car Feb 3. Police named Dorner a suspect in Quan's killing on Feb. 6.

Quan's father, Randall Quan, an attorney, represented Dorner when he lost his job with the Los Angeles Police Department LAPD in 2009. Dorner was accused of lying about another member of the force and fabricating allegations that his training officer had kicked a suspect with schizophrenia during an arrest.

On Feb. 7 in Corona, a resident told police she'd seen Dorner's Nissan Titan. Police chased the pick-up truck, exchanging gunshots with the fleeing suspect, who fired using a shotgun and grazed an officer's head before slipping away. The same day, the 33-year-old suspect popped up in Riverside where two officers were shot through the windshield of their cruiser at a red light. A 34-year-old veteran was killed while his 27-year-old trainee was wounded.

Later in the day, Torrance police misidentified a truck as Dorner's. They opened fire, wounding two women. Later, police from the same department shot at a different truck wrongly believed to be Dorner's. No one was hurt.

Police across Los Angeles were on edge upon learning of Dorner's manifesto, in which he warned of violence against members of the force.

"The Violence of action will be HIGH," Dorner wrote. "I will bring unconventional and asymmetrical warfare to those in LAPD uniform whether on or off duty ... You will now live the life of the prey ... I have the strength and benefits of being unpredictable, unconventional, and unforgiving."

The names of media personalities appeared in Dorner's 20-page declaration of war like Anderson Cooper, who was among several the Dorner praised. Cooper, a CNN news anchor, tweeted about receiving a package in the newsroom from Dorner that contained a note, DVD and a coin defaced with bullet holes.

The epicenter of the manhunt on Feb. 7, however, became Big Bear ski area in Southern California where San Bernardino County Sheriff's Office deputies found the torched wreckage of Dorner's truck.

More than 100 officers, including SWAT units, fanned out across the snow-covered wooded recreation area to look for the wanted Navy reservist. They tracked footprints in the snow, but the trail vanished at the edge of a frozen lake on Friday.

Sites across Southern California, Arizona and Nevada have also become parts of the sprawling investigation. A false sighting put a San Diego naval base on lockdown on the morning of Feb. 7. FBI agents raided a house in Las Vegas that Dorner owns, taking away boxes of evidence.

Although Big Bear became the focal point of the search for days, police explored possibilities that he'd slipped past them. On Feb. 11, a hotel in Tijuana, Mexico was raided in response to a witness claiming to have seen the suspect there.

The call was just one of the 1,000 tips that investigators said they'd received related to Dorner, the Los Angeles Times reported.

The Associated Press has created a timeline of key events in the ongoing manhunt for Christopher Dorner, the former Los Angeles police officer suspected of killing at least three people. Note: All times approximate:

Sunday, Feb. 3: An assistant women's college basketball coach and her fiance are found shot to death in their car in Irvine, Calif. Police learn later the woman was the daughter of a retired Los Angeles police captain who represented Dorner in disciplinary hearings that resulted in his dismissal from the force.

Monday, Feb. 4: Some of Dorner's belongings, including police equipment, are found in a trash bin in suburban San Diego, linking him to Irvine killings.

10:30 p.m., Wednesday, Feb. 6: A man matching Dorner's description makes a failed attempt to steal a boat from a San Diego marina. An 81-year-old man on the vessel is tied up but otherwise unharmed.

1:30 a.m., Thursday, Feb. 7: LAPD officers, protecting a person named in the manifesto, chase a vehicle they believe is Dorner's. One officer is grazed in the forehead by a bullet during a shootout, and the gunman flees.

A short time later, a shooter believed to be Dorner ambushes two Riverside police officers during a routine patrol. One officer is killed, and the other critically injured.

2:20 a.m., Thursday, Feb. 7: A shuttle bus driver turns in a wallet with an LAPD badge and a picture ID of Dorner to San Diego police. The wallet was found fewer than five miles from the boat, near San Diego International Airport.

5 a.m., Thursday, Feb. 7: LAPD officers guarding a manifesto target in the Los Angeles suburb of Torrance open fire on a truck they mistakenly believe to be Dorner's. A mother and daughter delivering the newspaper are injured.

A short time later, Torrance police are involved in a second shooting involving a different truck they also mistake for Dorner's. Nobody is hurt.

9:40 a.m., Thursday, Feb. 7: Naval Base Point Loma in San Diego is locked down after a Navy worker reports seeing someone who resembles Dorner. Military officials later said Dorner had indeed checked into a hotel on base earlier in the week – on Tuesday – but had left on Wednesday.

4 p.m., Thursday, Feb. 7: Authorities search a Las Vegas-area home belonging to Dorner and leave with several boxes of items. They say no weapons were found but decline to disclose what was discovered.

Friday, Feb. 8: Dozens of searchers hunt for Dorner in the freezing, snowy San Bernardino Mountains after losing his footprints near the site where the truck was found. Authorities search Dorner's mother's house in La Palma and collect 10 bags of evidence and also take five electronic items for examination. Police also search a storage locker in Buena Park.

Saturday, Feb. 9: Helicopters equipped with heat-seeking technology resume search for Dorner in the mountains near Big Bear. Authorities reveal that weapons and camping gear were found in Dorner's burned truck.

Monday, Feb. 11: Riverside County prosecutors charge Dorner with murdering a police officer and the attempted murder of three other officers in a potential death penalty case. Authorities receive more than 700 tips since the reward was announced.

12:20 p.m., Tuesday, Feb. 12: Police are summoned after a man resembling Dorner steals a purple Nissan in the San Bernardino Mountains. The vehicle is quickly spotted by California Department of Fish and Wildlife wardens on Highway 38. After briefly losing the suspect, the wardens see a white pickup truck driving toward them erratically and at a high rate of speed. Wardens say Dorner rolled down his window and opened fire as he drove past them in the opposite directions.

One of the wardens was able to get out and fire at the driver, who escaped on foot after crashing his truck.

12:40 p.m., Tuesday, Feb. 12: State Fish and Wildlife wardens are involved in a shootout with the suspect. Two San Bernardino County sheriff's deputies are wounded in a second exchange of gunfire and are transported to Loma Linda Medical Center.

4:30 p.m., Tuesday, Feb. 12: Police surround the cabin where the suspect is holed up and gunfire erupts before a blaze engulfs the structure and law enforcement officers wait for the fire to burn out.

4:50 p.m., Tuesday, Feb. 12: A San Bernardino County sheriff's spokeswoman confirms one of the two wounded deputies has died, and the other is in surgery and expected to survive.

6:30 p.m., Tuesday, Feb. 12: A law enforcement officials tells the AP a charred body has been found in the rubble of the burned cabin. They don't confirm the identity, although authorities earlier said they believed the man in the cabin was Dorner.

A San Bernardino County sheriff's deputy who was shot during a mountainside firefight with a gunman suspected to be Christopher Dorner is expected to survive. However, according to The Los Angeles Times blog L.A. Now, the deputy will need several surgeries.

Another deputy involved in the firefight was mortally wounded.

Multiple news outlets found themselves with apparent egg on their face after their reports that alleged California killer Christopher Dorner was dead were refuted by the Los Angeles Police Department.

As President Obama was giving his State of the Union address, CBS News tweeted that a body believed to be that of Dorner had been found in a burned-out cabin. CNN soon followed. So did ABC and NBC News. So did local Los Angeles stations. All cited either the LAPD or, in NBC's case, the LA mayor's office. "They Have Not Confirmed Anything"

Cindy Bachman, San Bernardino County Sheriff's Department spokesperson, tells reporters that "they have not confirmed anything."

"I can't tell you at this time when they might be able to enter the cabin," she added.

Too Hot To Search

LAPD: No body found yet in cabin that burned in #Dorner hunt, contradicting earlier reports. Cabin too hot to search. http://t.co/5vR1T3Mg

CBS, ABC, NBC, CNN and the Associated Press have all reported Dorner's body found in cabin -- LAPD says no body has been found

LAPD Commander A. Smith says no body has been found or identified as #Dorner. Earlier reports are false & cabin hasn't been entered.

Authorities: No Positive Identification Yet

Los Angeles Police Department told reporters that no body has been identified in the cabin in which Chris Dorner was believed to have been hiding, following a shootout and fire. 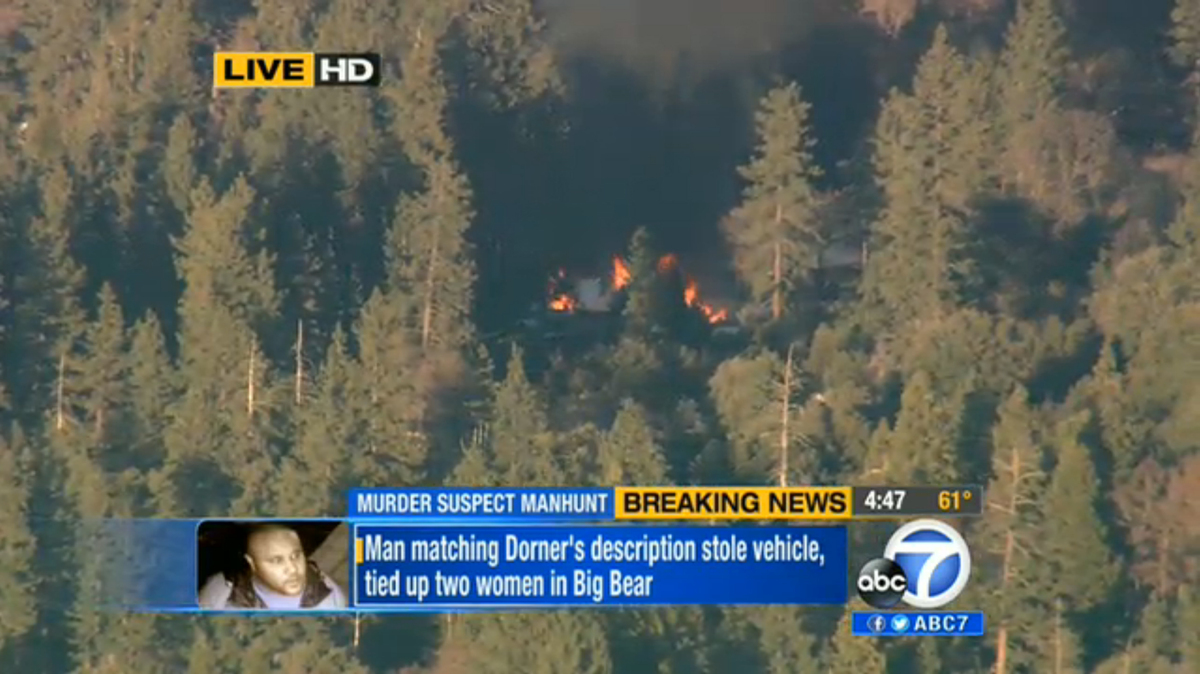