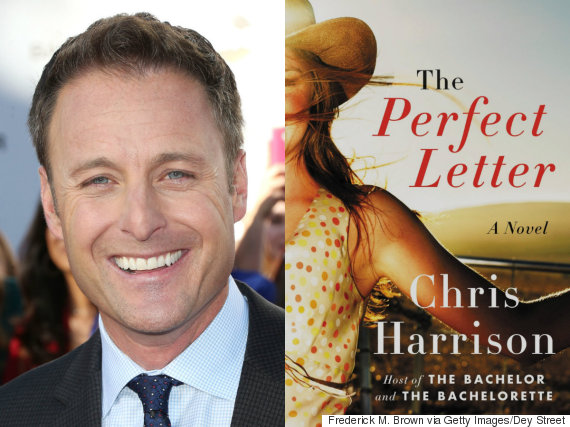 Do you love romance? Do you love reading? Do you love "The Bachelor"? Are you from Texas? If you answered "yes" to any two of those questions, do we ever have a book for you. "Bachelor" host Chris Harrison, as you may have heard if you are a fan, has written his very own romance novel -- sorry, Nicholas Sparks, love story -- and we're launching a new, sporadic feature called Best Worst Book in honor of his debut.

This feature will showcase those books that aren't just good, or bad, but so bad they're good. Books can be guilty pleasures too, right? Just like a certain reality series we happen to love.

And we don't just love "The Bachelor." Claire hearts cheesy romance novels! Maddie adores Texas, her home state! We couldn't wait to get our hands on this book, which we were pretty sure Harrison wrote specifically for us. And, as we hoped and prayed, it was indeed the best worst book we'd ever read. Here's our Gchat-driven critical analysis of The Perfect Letter:

What's the deal with Chris Harrison?

Claire: I love Chris Harrison, like so many "Bachelor"/"Bachelorette" fans. He’s the consummate host, and as someone with consummate social anxiety, I admire his ability to make everyone feel comfortable about going on a journey to find love on national TV. Does consummate hosting ability translate into consummate novel-writing ability? Um. Unclear.

Madeleine: I’ve waited my whole life for someone to ask me this question. Harrison's merits are many, it's true. He's a mediator for contestants when they're feeling lost, and he's active on Twitter! But what really made me think he had what it takes to write a passable romance novel was his flair for adding drama to the show. Just when you think you've got it all figured out, he shakes things up, you know?

Claire: Were you disappointed?? Maybe it's the producers of "The Bachelor" who should write a romance novel, now that we're talking about drama.

Madeleine: Not ... entirely. I guess it's a little like watching "The Bachelor." Every chapter had to be the "most dramatic chapter ever." C'mon, Chris!

Claire: IT'S ALWAYS A LIE.

Describe this book in a sentence or two:

Claire: The Notebook by Nicholas Sparks met the rom-com “Sweet Home Alabama” starring Reese Witherspoon, and they fell in love and had a baby named The Perfect Letter; it looked just like them.

Madeleine: Ok, um. The Perfect Letter is about a book-turned-film called The Notebook. Er, I mean, it's about a rich girl named Leigh who has to choose a rich, boring husband over a guy she likes because he's a stubborn ass and they fight sometimes.

Claire: The romantic heroine, Leigh, is an inexplicably wealthy editor at a small independent (lol) publishing house in Manhattan. She's also dating her boss, which doesn't seem like a bad idea or anything. But maybe she has a dark secret back in Texas. WHO KNOWS? Also she's very smart and beautiful.

Madeleine: Yeah ... Leigh is sort of like, the everywoman. Except she is an orphan who grew up on a sprawling horse ranch she was just itching to escape. Naturally, she goes to Harvard and becomes the editor of her own publishing imprint, all before 30! It's also about Jake, aforementioned stubborn ass, who, as far as I can tell, is just a tan guy with blue eyes who is kind of rude? But with a heart of gold!

Claire: And in prison, for reasons that are not his fault! But he's dangerous! But maybe not!

Madeleine: So, Leigh hasn't been back to Texas in exactly 10 years, ever since *the incident.* But she's invited back, and is kind of wigging.

Claire: Also, her boss/boyfriend Joseph, who is totally perfect and also coincidentally holds her professional future in his hands like a tiny wounded bird, just publicly proposed and she doesn't know what to dooo!

Madeleine: Right. Joseph. They love doing things like eating Thai food together, but they have like zero chemistry.

Claire: Can sex be, like, TOO mutually satisfying? Yes, posits Leigh. It can.

Madeleine: Anyway, Leigh heads to Texas to speak as the guest of honor at a writer's conference! Go Leigh! She's taking the time to mull the whole Joseph catastrophe over, and also hang out with her wild friend Chloe. They're total opposites -- Chloe, for example, wears red cowboy boots, while Leigh rocks impractical heels everywhere -- but they're super-close.

Claire: But it totally makes sense, because they both luv burritos.

Claire: Leigh is put up in a decadent cabin at this resort, which pretty much sounds like a fantasy suite. As editors always are at writers' conferences.

Madeleine: Also typical editor-at-writers'-conference activity: Leigh gives a seriously tear-jerking speech about the value of letter-writing, and people line up to try to pitch their awesome manuscripts to her. But she's distracted by a familiar face in the crowd. Could it be ... ?

Claire: No! But maybe ... Is Jake out of prison? Apparently yes, because he leaves a stack of her own letters in her hotel room. Letters she sent to him in prison. IS HE COMING FOR HER? (Jake is her high school bf btw.)

Madeleine: Nope. He's not. Book over. Just kidding he totally is, and they have pretty mediocre and definitely not mutually satisfying make-up sex. "Think you can do that again?" Leigh teases. No, but seriously.

Claire: Nothing more satisfying and original than hot make-up sex after years of estrangement, followed by an explosive reunion in the pouring rain. Unfortunately, there's still Joseph. And prison things.

Madeleine: Oh, yeah, those. So Joseph flies to Austin to surprise Leigh -- surprise! -- and for some reason proposes again over burritos. Leigh nearly spits out her marg she's so shocked. Also, some guy with a snake tattoo is trying to blackmail her.

Claire: BUT WHY? You'll have to read the book to find out. Also Leigh tries to have sex with Joseph but he's so boring he doesn't even like surprise bondage during sex, so things don't look super promising for them.

Madeleine: Yeah, he's really unbearable. He doesn't even understand her unless she explains things to him clearly once or twice. Jake, on the other hand, exudes understanding. Also, lots of sweat. But will Leigh have the guts to leave her boring life as a 28-year-old editor of best-selling award winners behind?

Claire: Could she have just not gotten deeply romantically entangled with her boss and mentor to begin with? No, that would make the stakes of this plot conflict too low! 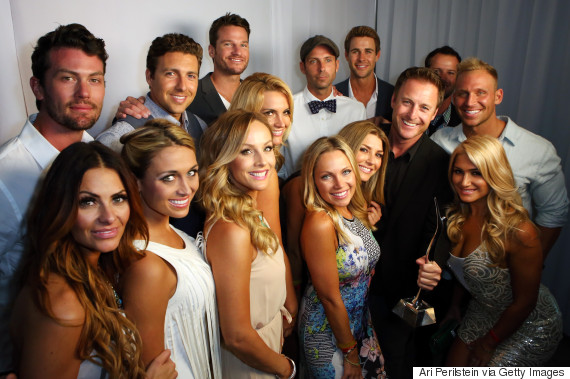 Can you spot the Harrison?

Best part of the book:

Claire: Imagining I was a 20-something, wealthy book editor from a Texas horse ranch who had two gorgeous, but totally different men fighting to give me maximum adoration and sexual chemistry.

Madeleine: For a romance novel, it's not bad! I give it props for giving the woman protagonist some agency -- although it does unfortunately take the form of surprise bondage.

Worst part of the book:

Claire: Probably all of the parts where I was like, "Wait I feel like this was in The Notebook/'Sweet Home Alabama.'"

Madeleine: I hate to nit-pick, but the inaccuracies about Texas drove me nuts. When Leigh's on the hunt for Jake, she looks *everywhere* but neglects to search beyond the hardware store and the saddle shop. You know, because the saddle industry is booming, and there's no way he's like, at the grocery store. Chris Harrison, you’re from Oklahoma, you should know better! Very few of us own cowboy boots, let alone have horses or snake tattoos.

Claire: But you do all subsist on burritos and margs. #fact

Madeleine: True. He did some research.

Best worst part of the book:

Madeleine: Probably every line of dialogue. Fuming over Leigh’s blackmailer, the best insult Jake could come up with was to call someone a real “dirtball.”

Claire: Imagining Leigh as "The Bachelorette," choosing between Jake, the edgy ex-con, and Joseph, the suave city guy, then immediately giving up her dream career as an editor to become a professional celebrity.

Would you recommend this book to a friend?

Claire: I would, if my friend liked Chris Harrison, "The Bachelor" franchise, romance novels, or ridiculously cheesy fiction. And I will even if they don't, because I just assume my friends care about what I care about.

Madeleine: I would recommend this to any human (who wants to feel discouraged about the practicality of the romantic choices they’ve made since becoming mature adults and/or wants to get to know Chris Harrison on a deeper level).

What we learned about love

Claire: Sexual chemistry is the most important thing in marriage. Safe words are for the unspontaneous. Don't date your boss unless you want to marry him (how do people still not know this?).

Madeleine: As a sage woman who Leigh meets at the writer’s conference advised her, love is all about chemistry. No, no. Chemistry does not only mean sex. It also means feeling like your spirit is very attracted to someone else’s spirit. Also, definitely don't date your boss, even if he has cute sweaters.

The Perfect Letter hits shelves May 19.

Also, check out HuffPost's new podcast on "The Bachelorette"!

You can check out past and future episodes of Here To Make Friends and other HuffPost Podcasts on The Huffington Post's iTunes page. Thanks to our producer, Katelyn Bogucki and our editor, Jorge Corona. 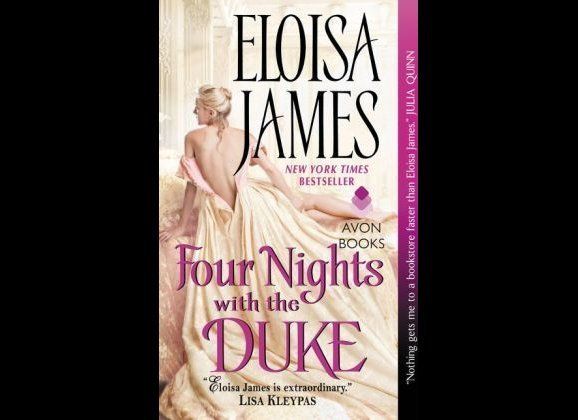