"I believe that a paramount factor in the critical definition of the creative Outsider is that he or she should be possessed of an expressive impulse and should then externalize that impulse in an unmonitored way which defies conventional art-historical contextualization," Roger Cardinal wrote in 1972. His words crystallized a genre that would come to be known as Outsider Art, though not without leaving a few frayed edges.

In the years since, the group classified by its outsider status has gained quite the following, championed by art critics like The New York Times' Roberta Smith. Outsiders have even garnered their very own art fair. Most recently, mega-gallery David Zwirner collaborated with Germany's Delmes & Zander gallery on "System and Vision," a group exhibition chronicling artists "whose unique ideas developed outside the circuit of art world institutions."

Following the show, two featured artists, collaborating as Chris Hipkiss, reached out, interested in further exploring the "o" word, as they referred to it, and the repercussions of said label. They explained how, despite their artistic education and past exhibitions in mainstream art institutions, they were often relegated to the realm of the outsider, in part due to the aesthetic of their meticulously hand-drawn works. Their spindly drawings, reminiscent of the perspective-shattering worlds of Martín Ramírez, could very well have been rendered out of a private obsession, removed from dominant trends and artistic progress. But, of course, they were not.

We've long considered outsider art to be one of the more bizarre art world categorizations that's based more on personal mythology than aesthetic attributes. Still, the possibility of an outsider aesthetic is intriguing. We chatted with Chris Hipkiss to learn more about the duo's experience navigating the slippery terrain between the inside and the outside. 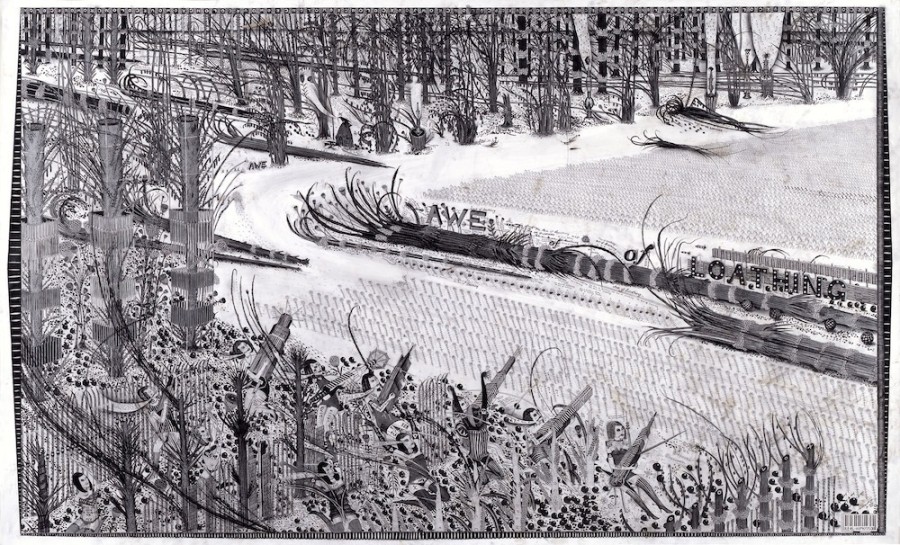 Who is Chris Hipkiss? And why the pseudonym?

"Chris Hipkiss" is a married couple, Alpha and Chris Mason. We met in 1983 at a London university when we were 18 and became creatively involved almost immediately. It took about eight years for the fruits of the collaboration to take form. Since that time, when we both largely gave up other forms of employment, we've shared the same living and working space. Our first show was in London in 1992.

Like any long-term relationship, it's developed over time; in tandem, our creativity has become more fusional over the years. In the beginning –- despite the dual input into the work –- we used the name Chris for our visual output because he is the draughtsperson; similarly, Alpha, as a writer, is the first name for our literary work. The surnames have been appropriated from arbitrary places, but we chose names other than our own to make them distinct from either of us individually. Everything we do involves the other.

What is your collaboration process?

Our aim is to portray the real world as we see it, and the inspiration for a given work may come from either one of us in terms of composition, theme, icons, etc. More often it comes about organically, the ideas being built over numerous conversations.

We create in a light space, with a fair dose of humor. The creations don't come from a gothic or obsessive place. There are obvious elements to the work, such as the fascination with birds, natural landscapes and architecture, but our dialogues concerning such things as gender issues, politics and sociology are more difficult to discern visually, and it is these hidden discourses that lead us to explore the symbolic meaning of landscapes, both human and natural. In our eyes, the work makes these things tangible.

Alpha is the one who formally studied art practice, as well as filmmaking and photography, and she tends to be the arbiter in terms of overall construction and the finished effect of a project. Chris is responsible for the hard graft –- transcribing the narrative. He's the "micro" element to Alpha's more "macro." He's spent decades honing the level of detail. But we've developed the techniques together over the years and each picture involves an ongoing exchange. 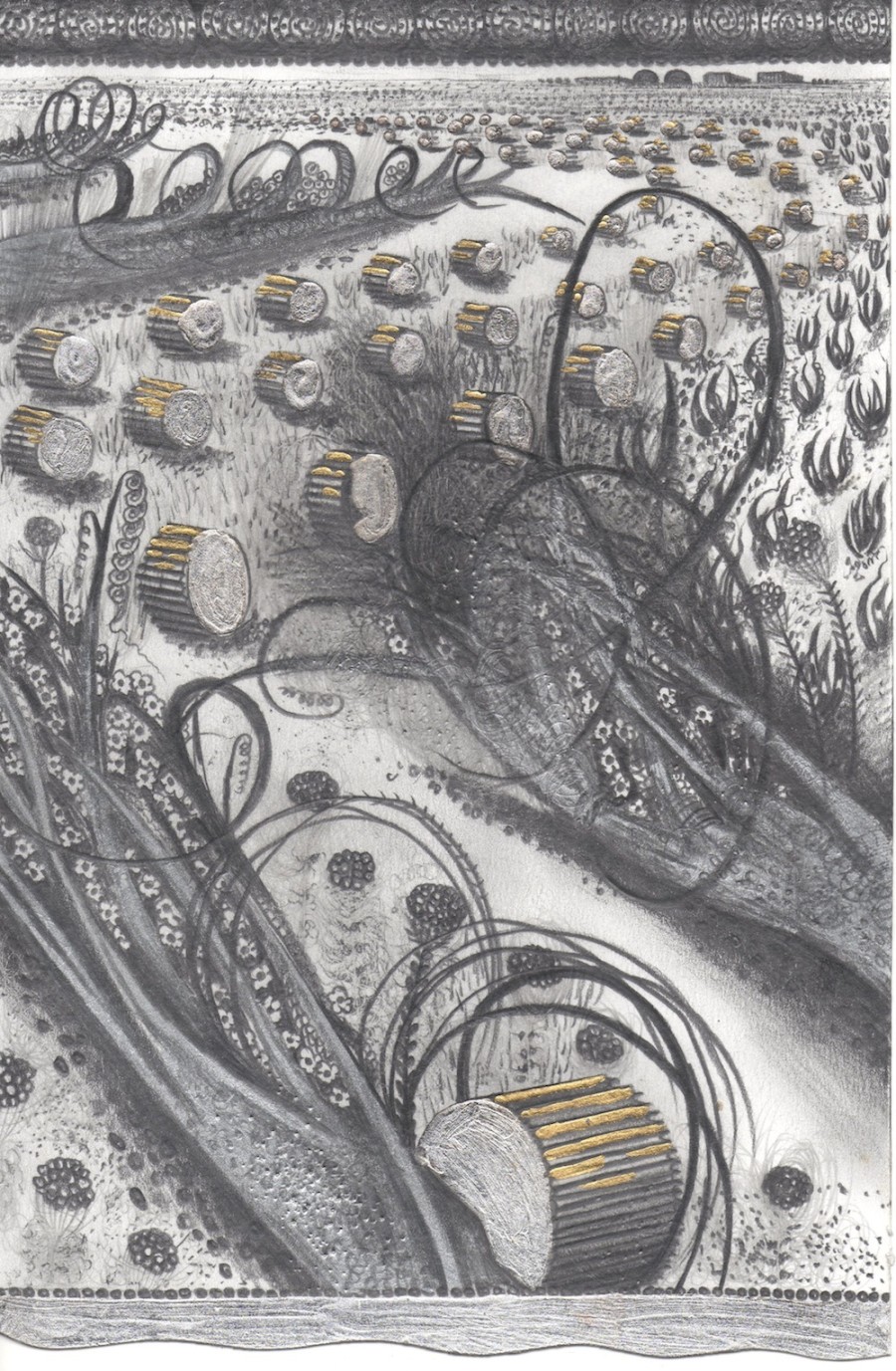 Neither of you identify as "outsider artists" because of your personal narratives and experiences in the art world. Do you think the aesthetic of your works has more in common with "outsider" works than mainstream contemporary artists?

Some people see superficial similarities, but mostly those who are immersed in that world as collectors, curators and gallerists. In the early years, the work was much less composed –- more doodle-like –- so we can understand how it was initially embraced as "outsider" even without a supporting biography; but we moved on from that stage fairly rapidly.

In group shows of "outsiders," the viewer could be forgiven for thinking that Hipkiss fits within that spectrum of styles. But we are also seen to fit in with Bande Dessinée artists in certain French publications, so a lot of it is about context and subjective viewpoints.

To confuse things even further, there is the recent trend for mainstream contemporary artists (Jockum Nordström, MArcel Dzama, Grayson Perry, Dominic McGill, Laylah Ali, etc.) to appropriate an "outsider" look. But where the college-trained artist strives to find a gap in art history for discrete projects, our goal is to improve our technique and develop our "life project" to our own taste.

In the one sense that we do what comes naturally, with little reference to art history, we probably come closer to the "outsider" way of working, but we are also aware of the viewer, so the result is a complex interaction between us and our audience. Recently, we took that to its logical extreme with a three-way commission for which the collector came up with the initial plan and actively shaped much of the detail. It was great fun for all involved.

Coming back to the first part of the question, one of the other reasons we don't identify with the "outsider" label is that our art is constantly evolving and shaped by our experiences in the world. As we see it, real "outsider art" tends to be a body of work created without any outside influence; it's introspective, and that's part of the fascination. But ours is quite the opposite.

Would you say that drawing has fallen out of the contemporary art vocabulary?

It seems that drawing has taken its rightful place within the contemporary art world in recent years -– hence the fairs and centers devoted to it and the acceptance of it by mainstream galleries. It's invigorating. Back in the early 1990s, when we were looking for representation, those galleries dismissed our work as mere illustration. Only the "outsider" fraternity regarded it as art, which in our opinion is the main reason we ended up with the label. Had we been born 20 years later, perhaps things would have been different in that respect. 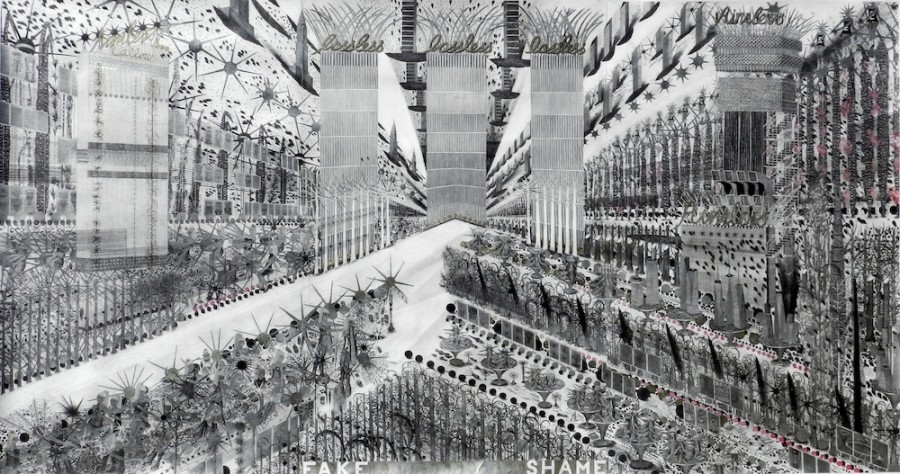 What do you think about the label of outsider art? Is there another term you prefer?

Our view is this: Jean Dubuffet's "art brut" was quite specific, in that it referred to art created by institutionalized people. Since [art critic Roger] Cardinal opened up "outsider art," to include artists who could be construed to have no contact with the mainstream, etc., it muddied the waters tremendously. A suitable biography –- one that implies, at the very least, a loner's life –- became the qualification.

There is also a class element to the preferred profile: usually the artist is portrayed as an uneducated, single male with an obsession (the inherent gender imbalance is a whole other subject). Who decides who fits? Who polices the veracity of the all-important "biography"? Where is the art itself in all this?

In practice, commentators frequently still refer to everyone given the label as having had severe mental health issues. To a living artist with no such profile, it's galling to read about oneself in those terms and very hard to escape the label once branded. Conversely, it dilutes the description for those living artists, who actually are "outsiders", in centers such as Gugging and Creative Growth.

"Outsider artists," almost by definition, are not expected to have or want a voice. There are some great and diligent gallerists and writers within the genre, but there are also a good number who will squeeze an artist's story beyond recognition to fit the brief. Keeping the categorization pure, and giving a voice to living artists caught up in the label, can only be a good thing –- for collectors, academics and art historians alike -– which is why opportunities like this are so important.

In short, we believe that "outsider" is a perfectly good term for those who create art in isolation or incarceration of some kind. For the likes of us, whose only supposed "outsider" qualification is that we chose not to pursue a traditional art education, we like the word "truant." It puts self-determination back into the discussion. It acknowledges the difference in the way we work but also the positive intention to create art for the world to see.

Was your opinion affected at all after participating in the Zwirner show?

It was a tremendous honor to be shown at David Zwirner, even if we were disappointed by the show's reception by several reviewers who reinforced the sentiments above. David and Susanne Zander went to some lengths to avoid using the "o" word in the press release, but the exhibition got labelled all the same. George Widener (a living, working artist who happens to have Asperger's) and Hipkiss were even presumed dead by certain writers. In most of the reviews, again, perceived biography was given more column inches than any mention of the artistic merit of the work itself.

On the upside, it's great that people like David have embraced the notion that there is real art to be found within the so-called "outsider" genre. Times are changing –- and understanding of the complexities beneath the hype is deepening.