"It's intense in Portland. The sky is gray," Chris Johanson comments abruptly in the middle of our interview. The Los Angeles-based artist, who is having a major solo show at MOCA this summer, communicated calmly with a sense of wonder. His manner of speech mimics his artistic practice, conveying the biggest ideas with the most humble means.

A severely overused and yearbook-ready Picasso quote-- full disclosure, I used it myself-- states: "Every child is an artist. The problem is how to remain an artist once we grow up." Johanson embodies this mission accomplished; his Crayola-bright, naive abstractions addressing the complex emotions of adult life.

Born and raised in California, Johanson moved to San Francisco in his early twenties and became active in the budding scene characterized by skateboarding, punk music and art. Over 20 years later and life for Johanson is different yet the same. He is married to artist Jo Jackson, for one. Instead of painting signs in the San Francisco Mission district he is having a massive museum exhibition.

Although still active in the music scene, Johanson has turned the volume down a bit. This weekend the ambitiously mellow artist is hosting a Quiet Music Festival in Portland, where low volume artists including Money Mark, Clare Rojas and Heidi Alexander will provide the hippest lullabies imaginable.

And in case you were curious, the now 44-year-old artist still skates. "You get to be like a bird or something," he explains. "It's a graceful way to dance around the planet." We spoke with the artist about naps, freaks and essential oils, among other things. Scroll down for a slideshow of Johanson's work. 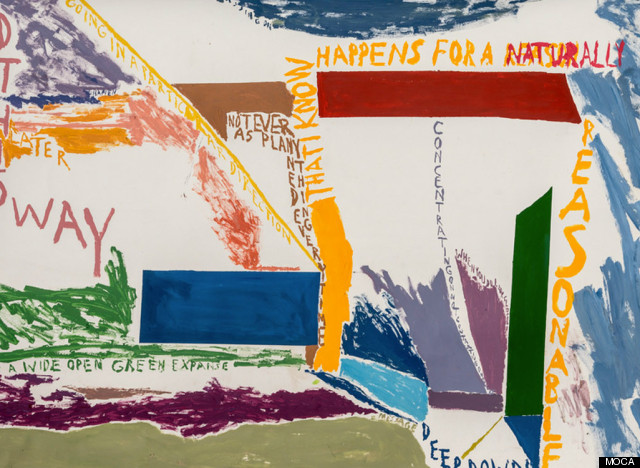 What exactly is a Quiet Music Festival?

The Quiet Music Festival is something I started up here in Portland where I was living and where I still kind of live a little bit. It's kind of a celebration of music, but just quiet music. I used to play in bands and because of that I have Tinnitus. I love music but I had to stop going to see bands like I used to, so I started this to stay connected to that community. This is the festival's third year and it is really going well. We've created a space filled with pillows and blankets and lamps that we dumpster dived or bought at garage sales. I guess I've gone to concerts where people fall asleep before but never like this.

Falling asleep! Is that encouraged or insulting?


I love it. I love music that is ambient sound. Silence for me is not cool. Right now I am outside and the sounds of all these birds mixed with the wind is so beautiful. That's why I like music, especially mellower music. But another main reason I put on the festival is to bring people together. That's my favorite thing about the world of artmaking -- though not with the art world. The art world has a kind of nastiness to it in some ways, but the world of art is about magic making.

Speaking of art world snobbery, Los Angeles can be pretty insular, don't you think? Or is that still a step up from New York?


When I think about New York and San Fran, I think of how hard it is survive there as an artist, or just in general. That's not really my scene. I think they are wonderful places, but too intense for my little brain. Los Angeles has more options there. It is like a giant, working-class metropolis; I think it is considered a rich place, but I don't think that's the case at all. I think it's a working-class town with pockets of wealth; to me living there is a very open experience.

What is different about this new MOCA exhibition than your previous shows?

I made these paintings of my wife and my dog. Well, I am in them too, but I just have a kind of spherical head with some old vintage Ray-Bans on them -- I wear them forever so you know it's me. I made these pieces of my situation, my little speck of energy and they felt really, really peaceful. Meditative. They're realistic, in my own version anyway. They look like her, but they look like three different aspects of her, and I couldn't belive that I did that. They really look like her; I hadn't painted like that in years.

Your exhibition statement has a quote that reads: "They are not careless, they are carefully carelessly careful to talk about not worrying about what it means to be alive." Can you expand on this?

I really thought about that line a lot. What I mean is -- we have our brains that we are born with and that are with us in our bodies during our lifetimes, and we have our genes, our experiences and our social conditioning and little sprinkles of religion, the media, news. Together, all this makes us have our individual lenses of the world, and I am just trying to have a good attitude about being alive. I think when I have a bad attitude about being alive the results are not as good, and I respect that. I have a lot of respect for getting to be alive, and I try to have respect for other people who are alive. That's what i am trying to do with my art. I try to make art that is really simple while talking about complicated things. I find it helpful to approach complicated things in a serious way with simple phrasing, and I think it is helpful for other people too because we live with symbols and words. Our brains are always dealing with symbols and words.

Do you have an opinion on all the MOCA controversy stirring right now?


I do, but I'd rather not talk about it. The one thing I would say is I think Jeffrey is very dedicated to art. I have been doing this art stuff for a long time -- I started chilling when I was 20 years old, and now I am 44 -- I've met a lot of people, and he is one of the most devoted people out there.

Some critics have read your work as poking fun at the California new age, hippy-dippy lifestyle? Would you agree?

Not at all, if they saw me they would know that in a second. They were looking at the glass half empty instead of half full. I am a fan of any kind of self-help, anything anybody believes in to have a better day I am 200 percent for. For me, if you take anything and put it under a microscope, it looks silly. If you put any kind of person under a microscope he would look weird, because we are all freaks. There is no normal. Some people just wear it on their sleeves but everybody has these rituals that they have to work with to live. It's mind-body; they affect each other. Some people can't fly, some people can't deal with silence, sounds, crowds, certain colors. We are all unique. Everything that people do they do it for a reason. I did not understand that before, but I do now.

Are there any rituals you don't approve of?


Greed I find really irritating. It's all around us. Self-will is like a nightmare. If things weren't regulated the planet would be dessimated completely. The individual is a problem. Self-empowerment is cool but, doing it for you only is so negative.

I used to be a house painter in San Francisco, and the real estate agent would always be around and I would listen to her on the phone talking business deals. Her tone of voice would change so rapidly it was kind of scary to listen to, almost like schizophrenic. I was like: "Oh, that's some heavy shit." One day she came over and was like: "Wait, here. Put this in." And this was a little vial of essential oils that would bring financial prosperity. Really tripped me out. There is all kind of shit like that.

That's the one thing I would be critical of. I get critical about that for myself, too. But that's not the main thing in my art; I just wanna make peaceful art.

Chris Johanson's exhibition "Within The River of Time Is My Mind" will be on view at the MOCA Pacific Design Center from June 29 through September 22, 2013. See a preview of the exhibition below.