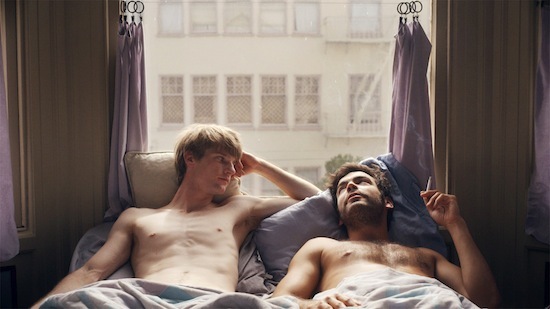 Welcome to the dance world of San Francisco in the mid-eighties -- 1985 to be exact. It's the era of Walkman, phones with tangly cords, glue traps to catch mice, Valium and... AIDS. Young understudy Frankie (dancer Scott Marlowe in his breakout acting performance, the first of many we hope) faces two tests, vital to his life and career. The first, can he stand up to the role of lead dancer and "be a man," filling in his colleague's shoes, while at the same time also undergoing the test of the decade. The results are both surprising and inspiring.

Chris Mason Johnson's sultry and perfectly human Test enjoyed its European premiere recently at this year's Berlinale. The film is a survivor's tale, told through the POV of a gay character, but so multidimensional that be it man, woman, straight or gay, everyone can relate to its themes. The film's cool soundtrack, intimate cinematography and wonderful dance sequences only add to the entertainment factor of a touching script.

I was lucky enough to catch up with Johnson and get answers to a series of questions that not only helped me to understand his film more deeply but also allowed me to get to know the man behind the camera, the wonderful combination of his characters, perhaps, all rolled into one extremely talented, insightful filmmaker and writer.

Was there a very specific moment when the spark of the idea for your project was born?

Chris Mason Johnson: I've been wanting to do a "dance movie" set in the 1980s for years. I do remember the moment I was inspired to start writing Test. I had another, bigger-budget project that had gotten bogged down in script notes and the Los Angeles development process that can really grind the creative spirit down if you're writing on spec. I suddenly said "No!" to waiting for someone else to give me the power to make something and started writing something I knew I could make on my own. It was very liberating. I didn't edit out any of the gay content. I made if very personal. I let myself be vulnerable about the material and simultaneously tailored the script for a micro budget I knew I could probably raise. Luckily, the "micro" aspect complimented the claustrophobic POV of the protagonist, who retreats into a Walkman-fueled trance to numb out the disaster around him.

The other spark that happened simultaneously was letting myself write the script from a visual and camera-movement point of view. It's a more European tradition as opposed to the more dialogue-driven tradition in America. Broadly speaking, in America we tend to think the "writing" in the film is the dialogue. But in fact the writing might also include shots, images, visual metaphors. How you think about writing really determines the kind of movie you make. I don't think Kieslowski's Blue could have been made in America, because it was written as a series of shots, not dialogue-driven scenes. I knew I could get away with this anti-conventional approach because I wasn't going to finance the film in the usual ways. When you finance conventionally, the script has to look and sound conventional.

You crowdfunded for post-production of the film, can you talk about your experience and what you think made your campaign so successful?

Chris Mason Johnson: I think our Kickstarter campaign was successful because a lot of people have a personal connection to the story, and that connection runs deep. The movie deals with the first and in many ways worst decade of the HIV/AIDS epidemic in the U.S. But it deals with this era on a small, intimate level. It's one very young and frightened man's story of surviving that era, which is key. I think it's safe to say that most or maybe all so-called AIDS movies up until Test have dealt with one or more protagonists getting sick and dying in the course of the fiction. That's understandable. It's a deadly disease! And the first narratives to tackle it necessarily tackled that aspect. But Test is about surviving that era, which loops back to my original point: anyone who connected to our Kickstarter campaign because of personal biography also survived that era and could identify with the story of Test.

Also I think the strong dance component helped our crowdfunding campaign. Dance is great on film and we featured it in the Kickstarter video. The choreography by Sidra Bell is sexy, spectacular and fun but at the same time serious and not kitschy. That last point is important for audiences who know something about dance.

Of course, you own background is in dance, so there is that autobiographical element to your story. But more deeply, do you write characters that you identify yourself in, and are some more so than others?

Chris Mason Johnson: I think most writers do. I identify with Frankie in Test, and I identify with both gay characters, Tony and Robert, in my first feature, The New Twenty, and with several other characters in that film too, including the female lead. I identify more readily with vulnerable characters who feel outside of the mainstream, and often more with female characters for a similar reason. By definition women have lacked power within patriarchy and their struggle probably interests me because it's analogous to the LGBT struggle. I'm collaborating with two women writers now so I can spend more time with female characters.

The NY Times compared Test to Parting Glances and in so doing called it "gay cinema." How do you feel about labels in general, and that label in particular, for a film that is about so much more?

Chris Mason Johnson: First of all, I'm honored to be compared to that really lovely and important film. About labels, I think they're unavoidable because that's the way language works, but I do think we have to be careful with them. When I was in college the semiotics term "floating signifier" was popular. It just means that any given word cannot always point to a fixed entity or meaning; words "float." The re-appropriation of the word "queer" in the Nineties took advantage of the floating signifier idea. There was a conscious attempt to take what had been a slur and turn it into a badge of outlaw honor: "We're here, we're queer, get used to it!"

I think the label/signifier "gay cinema" is mostly used now as a bit of a put-down, as in this is marginalized cinema that's not good enough to cross over, that has a niche market which will be satisfied with sub-par content because they're so damn hungry to see themselves represented, and they're also willing to be titillated by a little cheap skin and sentimental formula. "Gay cinema" in this connotation is a step down from the "queer cinema" movement of the mid-1990s. But hopefully movies like Weekend and Keep the Lights On and Test on the micro-budget level, and Brokeback Mountain and The Kids Are All Right on the larger budget indie level are shifting that perception.

If there were no limits of time, casting and money, what would be your ideal project?

Chris Mason Johnson: Wow. That concept is so alien to the daily toil of indie filmmaking that I go wide-eyed with wonder thinking about it. There are a few big-budget movies I'd love to make: 1) a mid-1970s drama with a 40ish star woman lead and her transgendered teenage daughter and queer son; 2) a big-budget musical with strong dancing and singing in the tradition of Bob Fosse's Cabaret, Milos Forman's Hair and Baz Luhrman's Moulin Rouge.

And is there a scene in Test that ended up on the cutting room floor but you really wish had stayed in?

Chris Mason Johnson: Not really. It's more the opposite, there are scenes we didn't have the time or money to shoot that I sometimes wish we had. But that's the limit of the micro-budget.

And finally, three words that describe you.