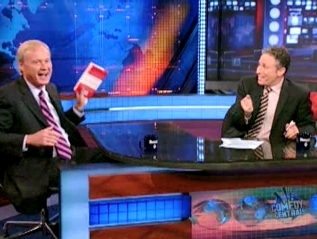 We're getting into a bit of a Chris Matthews habit, we admit it, but how are we supposed to resist when he insists on wearing his special pink tie? That's what he wore to last night's guest spot on "The Daily Show," where he chatted with John about his new book,"Life's A Campaign. Jon, as it turns out, is not a fan of the book's central conceit: That you should treat your life and the people in it as though you were running for office. Jon called it a "self-hurt book" but clarified to Matthews that "I'm not trashing your book, I'm trashing your philosophy of life." Well then, that clears that up! He also called it "a recipe for sadness." Viewing audience, rush out and buy it! Here's the full clip:

To his credit, Matthews remained cheerful and steadfast in his defense of his book, and its underlying message: That getting ahead takes more than just being a nice person and working hard (though that, one would hope, is part of it). Here's a snip from the book's
Amazon page
:

The big payoff in Life's a Campaign is what you'll learn about human nature:

Let Chris Matthews use you tomorrow night at the Hardball 10th Anniversary party in DC! It's at Decatur House.