This week, Richard Prince broke the (art corner of the) Internet when his appropriated images of young women's Instagram photos went up for sale for $90,000 apiece at the art fair Frieze.

Here to steal the spotlight from Prince is an old favorite when it comes to art world controversy, Chris Ofili. And, we're quick to admit, we'd far rather read and write about Ofili. 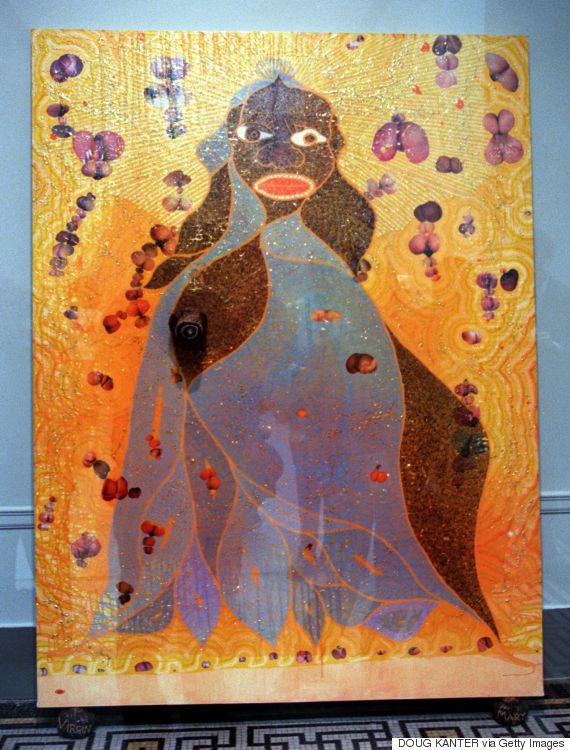 In particular, we're talking about Ofili's 1996 piece "The Holy Virgin Mary," a work Ofili referred to as "a hip-hop version of the story" of the Madonna. His shocking depiction of an African Virgin Mary features an exposed breast formed from lacquered elephant dung as well as a robe made of pornographic depictions of women's asses. The work is being sold via Christie's this June, and is expected to go for a cool $2.3 million.

Although the painting was made in 1996, it wasn't until 1999 when the feces-adorned Virgin was exhibited at the Brooklyn Museum, and the elephant dung really hit the fan. The piece, part of "Sensation," Charles Saatchi's show of works by Young British Artists, particularly enraged Mayor Rudy Giuliani, a devout Catholic who in reaction attempted to cut off the museum's city subsidy and remove its board, calling the piece "sick stuff."

Despite the commotion Ofili caused with the work, the Turner Prize–winning artist didn't opt for his unconventional medium sheerly for the purpose of provocation. The material, which he culled from the London Zoo, is, in part, a reference to Ofili's African heritage. "It's a way of raising the paintings up from the ground and giving them a feeling that they've come from the earth rather than simply being hung on a wall," he told The New York Times in 1999. "There's something incredibly simple but incredibly basic about it. It attracts a multiple of meanings and interpretations."

The most popular interpretation, of course, seems to be something along the lines of, "Ohmygawd, this painting is made of shit!" The massive backlash and conversation surrounding Ofili's work speaks less to the masses' scatological obsession, and more to the pop-up binary that so readily assembles between the religious right and the artistic left; the traditional and the experimental, those who think artists should let religious figures fraternize with bodily excrements and those who disagree. For another example, see Andres Serrano's "Piss Christ."

While many insular art world dialogues are filled with contradictions and subtleties, the Ofili controversy presents a chance for the art-loving masses to converge over a mutual love of artistic expression. It's not the most nuanced of artistic debates, but at least those wishing to host a Facebook rant without doing much research know exactly where they stand. It's moments like these that bring the most disparate corners of the art world together to fight for a common goal: the dutiful right to rub poop on a canvas.

Fast forward more than 15 years and "The Holy Virgin Mary" has risen to a nearly mythical status in art world folklore, following Ofili's widely praised retrospective at the New Museum last year. Until now, the incendiary art object has been in the possession of Australian collector David Walsh. According to Vulture, Walsh is a "gambling billionaire (really) who built an underground museum in Tasmania and filled it with conceptual contemporary works, alongside mummies."

The Virgin is slated for auction as part of Christie’s June 30 auction of postwar and contemporary art in London, and it's expected to sell for around two million dollars. In fact, according to a Christie's spokesperson, a third party has already guaranteed a minimum price for the piece. It could go for even higher; right now, Ofili's record auction price is $2.8 million, for the 1998 "Orgena," sold in June 2010.