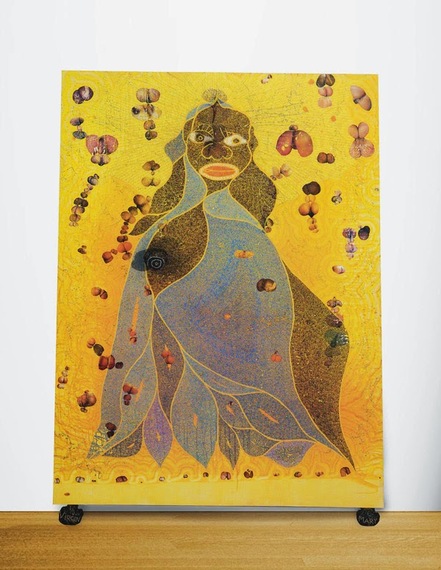 There's a lot of good shit in Chris Ofili: Night and Day currently on exhibit at the New Museum. Not the selfies of shit that are popping up on iPhones these days, but dung. Ofili is quoted as saying this about "The Holy Virgin Mary" (1996) whose profane Madonna includes inlays of assholes along with the infamous fecal matter:

As an alter boy, I was confused by the idea of the holy Virgin Mary giving birth to a young boy. Now when I go to the National Gallery and see paintings of the Virgin Mary, I see how sexually charged they are.

Ofili comments thusly about another centerpiece of the show, "Shithead," a piece of dung with teeth, topped with bits of his own hair:

The show is titled "night and day" since some of the paintings are so conceived that the color of a face will change from black to white depending on the perspective of the viewer. Ofili grew up in England and his parents were born in Nigeria. Race is one of his subjects. Blaxploitation and hip hop are elements of some other works. Big Daddy Kane's song "Pimpin'Ain't Easy" is reflected in an Oflili artwork of the same name from 1997 which also hearkens back to the Notorious B.I.G lines, "Pimpin' ain't easy but it sure is fun." But what's almost disconcerting is the profound religiosity which infects all of the work. "The Adoration of Captain Shit and the Legend of the Black Star" is the title of yet another painting. Ofili partakes of a tradition of transgressive Christianity that goes back to Dostoevsky's The Grand Inquisitor, to Graham Greene's fugitive priest in The Power and the Glory and to the damnation that infects the saintly fallen creatures in Pasolini's films. Then Mayor Rudy Guiliani took offense at "The Holy Virgin Mary" when is was shown at the Brooklyn Museum in 1999 and tried to have it removed. In another age, Ofili would have been burned at the stake.