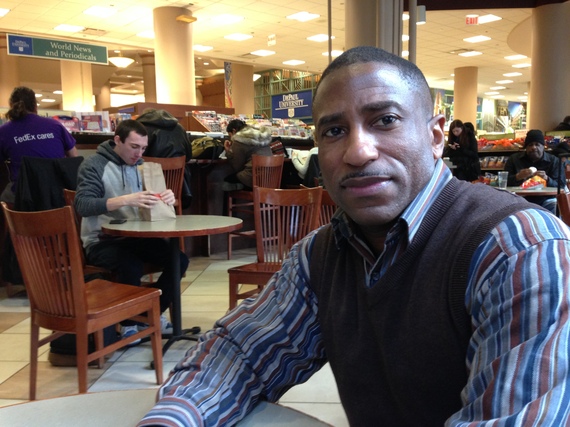 Chris Ware will never forget the incident that sparked him to run for mayor of Chicago.

He heard the shots that killed Walter Neely, a 25-year-old artist and father of two, on a warm August evening outside his home in the Bronzeville neighborhood.

A veteran of close to two decades on the Chicago Police Department, Ware has worked in the gang and tactical divisions.

He's endured the death of David Blake, a fellow officer and backfield mate on the Enforcers, the department's football team.

Nevertheless, the murder outside his front doorstep, and the 13 other bullets from the shooter that could have killed others in the neighborhood, shook Ware to his core and pushed him to take action.

He assessed the field of mayoral candidates seeking office for the fifth floor on City Hall.

He didn't see any other candidate talking about the city's chronic violence, or other key issues, the way he saw fit.

And he decided to join them.

Ware has not sought elected office before.

He didn't gather enough signatures to appear on the ballot.

Nonetheless, he is proceeding undaunted.

Ware says he brings a number of credentials to sit in that seat for the next four years.

In addition to his years of service in the police department, the lifelong South Side resident whose Enforcer teammates used to call "Mighty Mouse", brings his work ethic.

For years, Ware worked security and helped coach wrestling at Bogan after completing his policing responsibilities.

He never tallied the hours, but knows the effort it represented.

"That's the same commitment I want to give the citizens of Chicago," he said.

Ware's vision for Chicago is grounded in the sense that people in all neighborhoods and from all backgrounds want the same essential things.

Businesses bringing jobs to the community.

Taxes that are not too high.

"What we're talking about is not rocket science," Ware says.

He has a number of programs and plans to get there.

Some, like boosting the presence of vocational education in the Chicago Public Schools, are familiar.

Others, like curtailing the red light program that was the subject of a lengthy Tribune expose, appear to be responding to recent media coverage.

And, still, others come from Ware's decades of experience in the community and his observations of what is happening in the city.

This includes Lots of Food, a plan to convert vacant lots in many of the city's distressed communities into gardens that can help residents of those neighborhoods be more self-sufficient, reduce their food costs and get much-needed people onto the street to have a positive presence.

Ware also mentioned Lots of Art, a program that would take those lots that are environmentally unsound for growing food and turn them into art spaces that could draw people from other neighborhoods to parts of the city to which they don't usually travel.

Such visits could stimulate opportunities for commerce and business development, according to Ware.

Perhaps the most innovative idea involves shipping containers that can be used for housing.

"We can use them on lots; we can use them to tear down existing frame houses that are no longer being utilized, or are not a viable, or are going too much to rehab," Ware said, adding that solar panels and wind turbines can be added to make the containers even more eco-friendly.

He asserted that there is a ready supply of containers along Route 55 and near 47th Street.

"There are some very magical things that happen with these containers," Ware said.

Some might say that magic would need to happen in order for Ware to topple incumbent Mayor Rahm Emanuel, but Ware insists he's seeking to do just that.

"My objective is ultimately to win," he said. "I don't see anybody coming with knowledge, insight and the ability to do greater things."