Fox News’ Laura Ingraham came for Chrissy Teigen after the model and cookbook author was named one of Time’s 100 most influential people of 2019.

But Teigen fired back with a series of blistering tweets in which she accused the host of “The Ingraham Angle” of being a white supremacist.

Ingraham on Wednesday mocked Teigen’s inclusion on the list and her “take on female empowerment” during an event for House Democrats last week when Teigen said women shouldn’t be afraid to say “fuck you” more frequently.

Ingraham also claimed that the publication’s list, which this year included more women than ever, was “not a reflection” of American society.

Check out the full segment here:

Teigen, who is married to singer-songwriter John Legend, called Ingraham a “corny monster” in a series of withering posts in reply.

“There were 1 million other ways to try and take me down and this is what you choose?” she wrote. “Fuck you.”

Corny monster. There were 1 million other ways to try and take me down and this is what you choose? Fuck you. 😁 https://t.co/wETBvafAzo

Teigen, who is a vocal critic of President Donald Trump, also told Ingraham that when Time “comes out with their 100 most influential white supremacists list, I promise I won’t question your worthiness.”

when time comes out with their 100 most influential white supremacists list, I promise I won’t question your worthiness, @IngrahamAngle

Last week, high-profile rappers, including Snoop Dogg and The Game, called for Ingraham to be fired after she joked about musician Nipsey Hussle’s death.

Teigen concluded by sharing a GIF of Ingraham waving in a way in which some people have suggested inadvertently looks like a Nazi-style salute.

He described Teigen as “a riot” and “out-of-her-mind funny.”

On her food, he wrote:

But while she might come off as lighthearted, Chrissy’s cooking is truly excellent. She’s a true perfectionist and extremely precise. She remembers where she came from, and she’s very proud of that. Her father is of Norwegian descent, her mother is Thai and she’s American, and she’s bringing her culture to the food world. Her cookbooks are made for people to cook at home, but they’re not something you just leave on the coffee table—they’re recipes you want to make over and over again.

Ripert also explained why he loved Teigen for being “very opinionated” and “very much herself.”

“She may be glamorous and an icon in elegance, but she’s extremely approachable and warm,” he said. “And above all, she’s a very proud mother and a tremendously supportive wife. I admire her so much.”

John Legend described Ripert’s note as “a beautiful tribute to my awesome wife.”

A beautiful tribute to my awesome wife by our friend, the magnificent chef @ericripert https://t.co/gALNjLKgMg

Teigen, meanwhile, tweeted that she couldn’t believe her inclusion on the list and asked her 11 million followers to “photoshop me onto the cover.”

I can’t believe this!! Thank you @time thank you thank you, Eric!! Can someone photoshop me onto the cover I didn’t get one feel free to use any photo https://t.co/SLpzcPVZnO

Her fans, of course, delivered:

.@chrissyteigen queens deserve covers.... so we're here for you! pic.twitter.com/wNa3Jcb3sP

How the cover should be @chrissyteigen pic.twitter.com/SMjEKeTCtV

The only eligible photos are these. Sorry I make the rules pic.twitter.com/f6A16zjZB1

here you go @chrissyteigen- i got lazy with the font at the end but your wish is my command... again (see second attachment wow you've come such a long way) pic.twitter.com/pnlE45NsjY

And Teigen appeared happiest with one in particular: 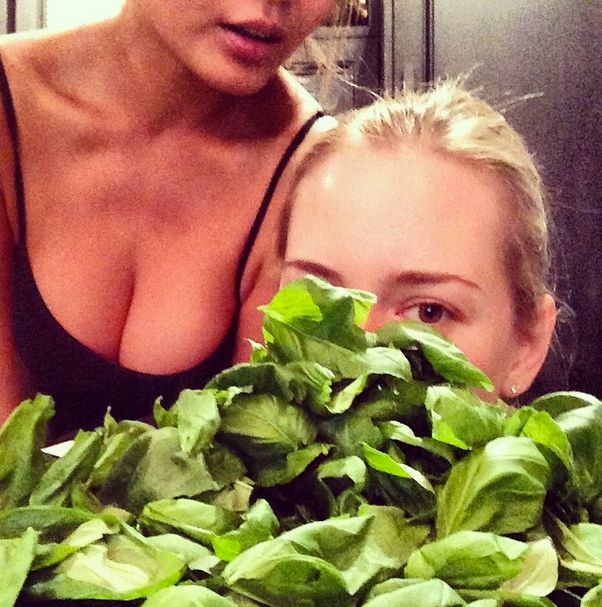