Sports Illustrated model Chrissy Teigen recently announced her pregnancy on Instagram, posting a picture of her burgeoning baby bump. The caption read: "Somebody is early to the party" with three unamused emoji indicating that she was slightly dismayed by showing so soon. Teigen received 11,000 comments on her photo, and while many were positive, several critiqued both her body and her method of conceiving.

Teigen has been open about using in vitro fertilization (IVF)--a process that is extremely common for women trying to conceive; according to a report for the Society for Assisted Reproductive Technology, more than 174,962 pregnancies were attempted through IVF in 2013. IVF requires prospective mothers to get hormone injections to stimulate egg production, have their eggs harvested, have the eggs inseminated in a lab, and then have a resulting embryo implanted in their uterus.

A single IVF procedure costs $12,000-17,000, takes two weeks, and comes with a long list of uncomfortable side effects. Each IVF procedure has an 18 to 43 percent chance of working based on the age of the mother, as well as other factors.

Imagine that you've gone through all of that and are successfully pregnant. Imagine that you post a picture of your pregnancy on social media and you receive responses telling you that "you're too big," "you must be carrying twins," "my friend wasn't that big and she was carrying twins so you're definitely carrying triplets," "that's what you get when you use IVF," and "real women don't need to use IVF anyway." That's exactly what happened to Teigen, who responded on Twitter, "I did IVF. One at a time. It isn't twins. I can see the damn thing. Get out of my uterus!"

I did IVF. One at a time. It isn't twins. I can see the damn thing. Get out of my uterus!

Chrissy Teigen is right to be upset about the sudden, alarming public scrutiny that all pregnant women find themselves subjected to--though hers is multiplied by celebrity. Teigen's picture was not a call for comments about her body. It wasn't an invitation for opinions, critiques, or advice. However, the responses to Teigen's post point to a larger problem with how we relate to women and pregnancy. When a woman becomes pregnant, we begin to treat her body as public property. The Internet has only made that problem worse.

Part of this has to do with our historic discomfort with pregnant women. In the 19th century, women would hide their bumps under bulky gowns and lock themselves inside for their final trimester--far away from the public eye. Social historian Clare Hanson explained to Jezebel that this stigma is "connected not only with the embarrassment inspired by visible signs of female sexual activity, but also with the fact that the pregnant body acts both as a reminder of our material origins and a signifier of the (uncertain) future."

Visibly pregnant bodies are not only a reminder that women are sexual beings and the source of life, but they also evoke a time when you were small, helpless, and dependent; in the early moments of life, death is so close it feels like a whisper away. In other words: Pregnant bodies skeeve us out. And nearly every woman has experienced that mixture of discomfort and entitled ownership herself.

When I was pregnant, I rode the train every day. As I became noticeably and then very pregnant, I found myself having to fend off strangers on a daily basis. "When are you due?" "How far along are you?" "You are big, you know? Like, really big." Hands reached toward my stomach, moving to touch me and feel the baby kick. The impulse is kind, but it forgets that I am a person, I do not know you, and you still need to ask first before you touch me. People looked at me with a critical eye and announced how far along they thought I was, "Due any day now, I can tell."

I was actually only 6 months pregnant at that point. When I was 9 months pregnant, people moved aside as I walked toward them. They gave me a wide berth and looked around nervously, as though my water might break at any second and ruin their shoes.

Female celebrities experience this phenomenon even more profoundly--the idea that a pregnant woman's stomach is the only thing that defines her. Witness Kate Middleton waiting patiently to meet One Direction, as is her royal duty. Headlines comment that she's "showing off her baby bump"--instead of, well, existing. Kim Kardashian, having been subjected to intense scrutiny and ridicule during her first pregnancy, is being attacked by TMZ again during her second pregnancy. What's her crime exactly? Having overly swollen ankles.

We celebrate and denigrate pregnant bodies when we should treat them like any other body: belonging totally to the person and in no way needing our help, advice, critiques, or comments. Doing otherwise can have unfortunate effects. Kardashian confessed in an interview with C Magazine that being called "fat" for "something [she] couldn't control" forced the reality star to become more guarded and cautious of media attention: "It changed my mood; it changed who I was; it changed my personality a lot."

Teigen has similarly tweeted that she will no longer post pictures of her pregnancy on social media after the IVF backlash. "No more preg tweeting for me, lesson learned!! Back to food and reality TV and hay things."

It's sad that the lesson these women learned is that a pregnant body should stay hidden.

Dana Norris is the founder of the Story Club franchise. She writes for Role Reboot.

A version of this story originally appeared on the Daily Dot.

PHOTO GALLERY
Celebs Who Weren't Afraid To Bare All During Pregnancy
Download
Calling all HuffPost superfans!
Sign up for membership to become a founding member and help shape HuffPost's next chapter
Join HuffPost 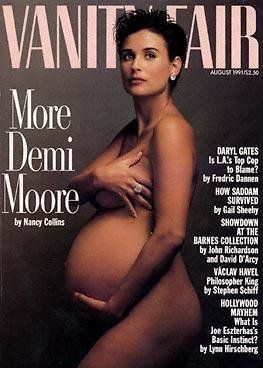 1 / 19
Demi Moore
Demi Moore’s Vanity Fair cover from August 1991 is the most iconic pregnancy photo of all time. Celebrity photographer Annie Leibovitz shot the cover when Moore was seven months pregnant with her second daughter Scout. While the cover is well-known and loved today, at the time of its release, it sparked criticism that the actress was over-sexualizing pregnancy. In total the now 51-year-old actress has three kids: Rumer, Scout, and Tallulah. Moore had all her daughters with ex-husband Bruce Willis.
Vanity Fair