Chocolate eggs and basket-carrying bunnies aside, Easter is a day when Christians the world over celebrate the resurrection of Jesus Christ. For some believers, it is also time to consider Christ's "Second Coming," a phenomenon that some Christians believe is foretold in the Bible.

The "Second Advent," as it is sometimes called, is a divine event that is said to mark the end of the world as we know it -- a time in the future when Christ will return to Earth to judge both the living and deceased.

Many Christians in the United States believe this "Second Coming" will occur some time in the next 40 years -- and the percentage of believers may surprise you.

According to a 2010 Pew Research Center survey, resurfaced by the think tank last week in anticipation of Easter Sunday, nearly half of U.S. Christians believe that Christ will "definitely" (27 percent) or "probably" (20 percent) return to Earth in or before the year 2050. Conversely, 38 percent believe that Christ will definitely or probably not return within the next four decades. 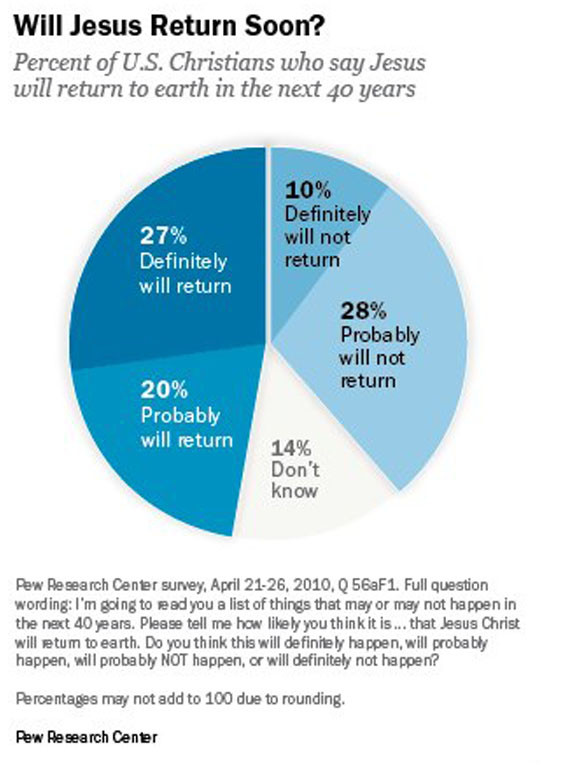 The "Second Coming" of Christ has oft been a point of contention between the various Christian denominations, with different groups interpreting the nature of Christ's return in their own distinct way.

According to the 2010 study data, 58 percent of white Evangelical Christians believe that Christ will definitely or probably return to Earth by 2050; conversely, only about 27 percent of white mainline Protestants and 32 percent of Catholics felt certain of the "Second Advent."

In related news, a recent Rasmussen report has revealed that 64 percent of American adults -- Christians and non-Christians alike -- believe that Jesus Christ really did rise from the dead, as described in the Bible. Only 19 percent of the 1,000 adults surveyed in the 2013 poll completely rejected this central Christian belief in the resurrection.

Are you surprised by these numbers? Tell us below.