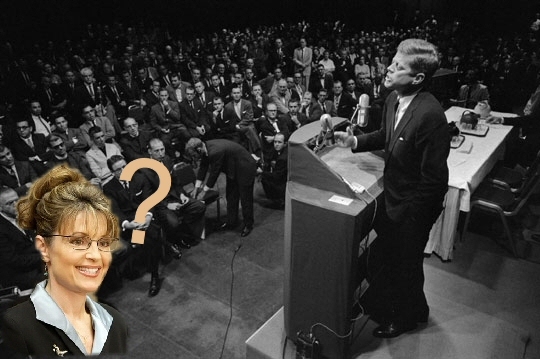 On this date in 1960, Democratic presidential nominee John F. Kennedy appeared before the Greater Houston Ministerial Association and a national television audience to address widespread concerns that his religion might harmfully influence the way he would preside over the United States if he won the election.

It is high time for Republican vice-presidential nominee Sarah Palin, about whose religious beliefs there are questions in many ways far more serious than those about Kennedy's Catholicism 48 years ago, to allow herself to be questioned in a similar open forum.

As the Christian author of a new book, Grand Theft Jesus: The Hijacking of Religion in America (Crown) on the Jesus Thieves who have hijacked Christianity, I implore Americans to take a careful look at the religious beliefs of Governor Palin before they jump on the Republican ticket's new bandwagon.

I have spent much of the past week looking into Governor Palin's religious beliefs and how they might affect her decisions, were she to become president. What I found is scary.

Early in September, 1960, a group of leading Protestant ministers had held a "Conference of Citizens for Religious Freedom," at which the Rev. Norman Vincent Peale, America's most widely read Protestant minister, forcefully demonstrated the power of negative thinking by declaring: "The election of a Catholic President would change America."

"I have always found the Gospel of Paul appealing," Adlai Stevenson responded for the Democratic campaign, "but I find the gospel of Peale appalling."

(As a Christian who attempts to follow Jesus, I find the anti-Gospel of Palin appalling.)

But John Kennedy had to respond himself, and his strategy was direct confrontation with the religious issue, which he did through a speech and open question-and-answer session on religion and government with the Protestant ministers in Houston on September 12, 1960. He won over some of them and reduced the fears of others with such comments as, "I believe in a president whose views on religion are his own private affair, neither imposed upon him by the nation or imposed upon him as a condition of holding that office."

In fact, Kennedy had nothing (in this regard) to hide. His Catholicism was of the most casual sort and he certainly wouldn't follow the Church's directives in governing any more than he did in his sexual life.

There is, in contrast, much reason to believe that Gov. Palin has a great deal in her religious beliefs that the McCain campaign would like to keep hidden from the American voters until after November 4. "We're not going to get into discussing her religion," a spokeswoman for the McCain-Palin campaign said last week.

Sarah Palin's lack of experience to prepare her for the presidency is frightening. She actually resorted once again last night in her interview with Charlie Gibson to citing Alaska's proximity to Russia as her qualification to conduct foreign affairs:

GIBSON: "What insight into Russian actions, particularly in the last couple of weeks, does the proximity of the state give you?"

PALIN: "They're our next door neighbors and you can actually see Russia from land here in Alaska, from an island in Alaska."

But the sorts of experiences she has had to prepare her (in her own mind and those of her backers on the "Christian" Right) are far more frightening.

She believes that everything the Bible says is literally true. She is a Creationist and rejects science. She believes the United States is a "Christian Nation." This is very dangerous stuff, far out of the American mainstream.

For the sake of the country -- and for Gov. Palin's own sake -- the campaign's vow of silence on the subject of her religion must be broken -- completely, publicly, and personally by the candidate herself, in an open forum.

The single religion-related question Gibson asked her yesterday was not remotely sufficient. He asked whether she thought the war against Iraq is a holy war. Her answer does not seem to match what she said three months ago, but there are far more serious questions about her religious beliefs that were not asked.

Here are just two examples of the many questions that Ms. Palin needs to address in order for voters to be able to make a fair assessment of whether her religious views might adversely impact her ability to make decisions in national office:

Do you believe, as at least one of your pastors has said, that the United States is a "Christian Nation"? If so, what does that mean for the nation and for those who are not "Christians," as you define that term?

Just three months ago, you stood next to Pastor Ed Kalnins in your former church, nodding your head in agreement, as he told the congregation that he believes that the "Last Days" are upon us and that the reason Alaska needs to build up its infrastructure through your policies as governor is that Alaska will be a refuge for people fleeing from the Lower 48 states during the coming "End Times." Do you believe that there will be an "End Times," and if so do you think it is coming soon?

If such a question seems bizarre to ask of someone who seeks to be next-in-line to the presidency, it is. But I know about the kooks of the extreme "Christian Right"; I have been studying them for years, and the prospect of having someone who is even more extreme in her belief in this sort of nonsense than the current president is in control of an arsenal of mass destruction that could bring about a real version of their fanciful "Last Days" is literally terrifying.

If Sarah Palin and the McCain campaign will not provide an opportunity for her to be questioned freely and fully about her beliefs concerning such topics of enormous relevance, no American who does not subscribe to the "Greater Gory of Christ" inversion of Jesus depicted in Tim LaHaye and Jerry P. Jenkins's best-selling (and worst-Christian) book series, Left Behind, should vote for the McCain-Palin ticket.

Ellen Goodman said of Gov. Palin the other day, "So far, she looks like a Bridge to Nowhere." Palin's extreme religious views indicate that she may instead be a Bridge to Somewhere Most of Us Definitely Don't Want to Go.

Governor Palin, answer all questions about your religion, as John F. Kennedy did 48 years ago today.