This week, a Fox News host on the show Outnumbered (Out#) contributed to a discussion about how to stop terror recruitment among vulnerable immigrant communities in the United States by incoherently suggesting our government employ a "more robust, manly, not feminized, version of Christianity."

I wholeheartedly condemn this kind of sexist, dangerous, anti-Christian language about my faith.

Rachel Campos-Duffy says we have an assimilation problem, and laments the times of old when her father immigrated to America and public schools and civic groups openly proselytized and inculcated people with the conservative Christian brand of patriotism, so that they might become truly American, be accepted, and enjoy more opportunity as part of the Christian majority. 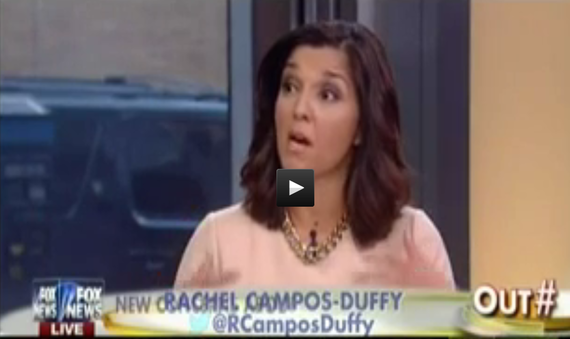 She addresses the issue of international familial and peer-based terror recruitment by revealing a gross misunderstanding of geopolitics and the nuances of the history and genesis of the current terror movements, positing that if groups of young Catholic men were currently going to Rome and joining a Crusade, the media and government would not be talking about peer-to-peer recruitment, but root causes. (Apparently she has missed a major strain of root-cause discussion and policy debate that everyone else is having; potentially because of her tendency for revisionist history.)

Instead of learning from NGOs, media, and government organizations on the ground in the MENA (Middle East North Africa) region about the real root causes and what the U.S. and allies are doing to address them, she is busy hoping the Pope will state his support for detonating this deadly weapon of "manly, not feminized, Christianity" in front of Congress when he comes to visit.

I don't know, but it seems to go without saying she identifies as conservative Catholic. And it is obvious she has been severely patriarchalized by her religion. Often people like to say that women who speak against their own gender's intrinsic value, worth, and leadership ability are simply proving that sexism is legitimate and the men who relegate women to secondary, diminished positions are right. The Catholic church, run by all men who exclusively hold extraordinary political and economic power (and billions of dollars in the Vatican bank), has raised many girls to believe that this is how it should be: a man's world dominated by male thinking and action, ordered by a male God who made women lower than men and therefore not able to hold positions of formal leadership -- religious, and some believe, political and otherwise.

I grew up in the deep American South in a conservative, fundamentalist evangelical environment that likewise taught me that I came as an afterthought to men in every way. Men were to lead, I was to follow. I could do or be "anything I wanted" as long as I only grazed lightly and non-threateningly within my gender-fence. Men intrinsically knew more about everything, ran everything, and were more intelligent, equipped and authoritative. I had limited agency and a limited role in the world. God meant for men to be the head of women, families, corporations, educational systems, governments, and religions. And they were divinely ordained to wage religious wars. Especially God's exceptional, "chosen" American Christian white men.

As Jimmy Carter said in "Losing my religion for equality":

"Women and girls have been discriminated against for too long in a twisted interpretation of the word of God.... The same discriminatory thinking lies behind the continuing gender gap in pay and why there are still so few women in office in the West. The root of this prejudice lies deep in our histories, but its impact is felt every day. It is not women and girls alone who suffer. It damages all of us. ..."

...This is in clear violation not just of the Universal Declaration of Human Rights but also the teachings of Jesus Christ, the Apostle Paul, Moses and the prophets, Muhammad, and founders of other great religions -- all of whom have called for proper and equitable treatment of all the children of God."

It took a lot of time, intentional questioning, and life experience for me to scrape off the paralyzing, putrid layers of this religious brainwashing. It took work on my own part to realize that worldview is not God nor Christian; it is misuse and abuse of power. It is debilitating for individual females, but also for communities, religions, domestic and foreign policy, and world affairs.

"Manly Christianity" is a rotten figment of medieval patriarchal social, political, and religious imagination and power mongering that has only caused violence, persecution, oppression and systemic suspicion and denigration of "outside" groups of people over the centuries. Additionally, the only thing the false notion of "manly Christianity" is going to do is continue to exacerbate the problem of terrorism, because it perpetuates a worldview that is quick to resort to violence and desires sustained power-over, presumably ordained by their particular version of God.

Men have run the world for a long time. We can easily see where this unbalanced and abusive gender dominance, including "manly Christianity," has gotten us. It is ugly and destructive. It is beyond time to bring women to the table at both local and high, global levels for peace and security.

Women have an equally valid and effective -- and untested and underutilized -- method of looking at and solving problems. Most often, if left to our own devices, it takes the form of cooperation, collaboration, common understanding, empathy, sharing meaningful stories, giving of ourselves for a greater good, recognizing the humanity in one another, eschewing ego and power mongering, and envisioning a peace that will allow our children and sisters to thrive. When is the last time a woman went on a shooting spree on a college campus? The recruitment of female terrorists is a recent phenomenon that exploits a lack of security and provision that is already present, and rhetorically impresses the belief that forming alliances with the violent, threatening men is the only way they will themselves will be spared from poverty, rape, mutilation, and a dim life of no choices.

On February 6, 2014, Iraq became the first county in MENA to launch a National Action Plan on Women, Peace, and Security. Afghanistan plans to launch one soon. This is a result of the United Nations Security Council Resolution 1325 on Women, Peace, and Security, which according to Women's Action for New Directions (WAND), "promotes women's equality and participation in all peace processes and decision-making, recognizing that women's inclusion is necessary to achieve stabilization and security."

The stakes are incredibly high, and women bring with them more social cohesion; new perspectives and solutions from the lens of the underside of society; and inclusive, diverse networks. When taking a global view of what women have rallied to do when given opportunities, we reach across political, religious, and ethnic lines in our efforts to counter violent extremism, educate ourselves and our children, and work together toward a better world. We need the female half of the population around the world to promote and support one another, support diplomatic efforts (women and girls suffer most in war and refugee situations), and to generate economic opportunities for one another. We need the investment, participation, and strength of the feminine more than ever.

We can't continue doing things like they've always been done and expect a different outcome.

Women are largely at the bottom of the structures, nearest the earth, and hence, the most experientially knowledgeable and well-positioned to assess and positively address the root causes.

Informed, patriotic Americans and responsible, Jesus-following Christians should be holding up and promoting "feminized" Christianity and women's place at the table, not diminishing and bashing it. 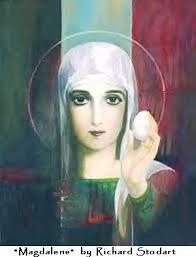 Jesus included women in his ministry, much more than the brutally patriarchal and oppressive Roman Empire's choices of canonized scripture and totally man-made doctrine and religious hierarchies let on. He worked against oppressive structures that pushed women and other marginalized peoples aside and down.

Jesus gave the Easter Christophany of his resurrection to Mary Magdelene alone (John 20), and in the most subversive of statements to our world, entrusted a woman -- in the time and context believed unfit to be a reliable witness or a legitimate agent or force in society -- with the news that he was alive and ready to bring the new realm of God he promised when he first started his mission. He stood in a tiny temple in his working-class, oppressed village in first-century Roman-occupied Palestine and declared God had sent him to free the captives, liberate the oppressed, restore sight to the blind, and declare the year of the Lord's favor, or the jubilee -- when slaves, captives, outcasts and those in debt could be restored to community and take their rightful place, with peace and prosperity for all.

Jesus never said the solution to violence was to inculcate and wrangle people into religious submission, or to be "manly." He said love your enemies, and love your neighbor as yourself. He said blessed are the peacemakers. He said, Mary, go tell them I'm alive.

Rev. Jennifer Crumpton is the author of the new book Femmevangelical: The Modern Girl's Guide to the Good News.