If the U.S. breaches its debt ceiling this week, bringing with it the global financial panic economists predict, leaders of a little-known far-right movement called Christian Reconstructionism can claim partial responsibility. Their goal: to eradicate the U.S. government so that a theocratic Christian nation emerges to enforce biblical laws.

That's right -- laws out of the Book of Leviticus prohibiting adultery, homosexuality, and abortion, with penalties including death by stoning.

The key leader of this movement is Gary North, founder of the Institute for Christian Economics in Tyler, Texas. He's a long-time associate of Ron Paul, intellectual godfather of the Tea Party movement -- the very people responsible for Congressional deadlock over the government shutdown and debt ceiling debate.

Paul and North go way back. North served on Paul's first congressional staff in 1976, and North describes himself as Paul's "original staff economist." Earlier this year, Paul announced plans for a curriculum for home schoolers that will teach "biblical" concepts. The director of curriculum development for the program? Gary North.

And what of the connection between this group and Republican Senator Ted Cruz of Texas, who almost singlehandedly created the government shutdown and debt ceiling crisis?

Cruz is the son of Rafael Cruz, a Texas pastor who directs Purifying Fire Ministries. According to a biography page for the True the Vote summit in April 2013, Rafael Cruz became active in politics during the 1980 presidential campaign, joining the Religious Roundtable, founded in 1979 to involve conservative Christians in politics. "The Religious Roundtable was a Judeo-Christian organization that mobilized millions of Christians all across the United States and helped elect Ronald Reagan," Cruz said. "It was a precursor of the Tea Party, even before the Moral Majority."

What to make of all of this? For the last few weeks Tea Party-leaning members of Congress have been described as "kooks" and "crazies" by the Washington establishment, liberals, moderate Republican leaders, and the media.

The name-calling might be satisfying to those who oppose the Tea Party, but it's entirely untrue. These are people who are patient, determined, deliberate, and rational.

I know this because I spent many years as a reporter covering religion and politics, more than four of them in Texas. So I've been watching conservative Christians for a long time, since the era of the late Jerry Falwell's Moral Majority, to the days of Pat Robertson's early Christian Coalition, and on to the culture wars of the 1990s and early 2000s.

During the years I covered religion, I watched politicking creep into evangelical congregations from New Jersey to Pennsylvania to Texas and beyond. In New Jersey, I interviewed the state coordinator of the Christian Coalition who in those early days revealed to me the movement's stealth plan to "take over" the Republican Party, "precinct by precinct."

Later, when I was working in Dallas, I wrote another story, this time about a movement to "take down" the nation's public schools, promoted by the Alliance for the Separation of School and State, among other groups. As it turns out, Ron Paul was one of the signers of the group's proclamation to "end government involvement in education."

Then there were the annual meetings of the Southern Baptist Convention, America's largest Protestant denomination, which during those years was engaged in an epic battle between conservative and moderate factions. At the time, a group of fundamentalist Southern Baptists had hatched a plan to "take back" the denomination. Over about 25 years, they prevailed.

At one such meeting in the Superdome in New Orleans, a distraught pastor told me he believed something darker than a desire for conservative theology was driving the battle in his denomination, and he handed me a sheaf of papers describing Christian Reconstructionism. He claimed that the fundamentalists wanted to use the denomination as a launching pad to bring down the federal government and usher in a Christian nation ruled by biblical laws.

Was it true? I didn't know. I kept the file and referred to it occasionally in the following years as I reported on the Religious Right.

Recently, however, I came across a line from North's book Unholy Spirits that gave me pause. He wrote, "The ideas of the Reconstructionists have penetrated into Protestant circles that for the most part are unaware of the original source of the theological ideas that are beginning to transform them."

And then there are newsletters stretching back to 1977 on Gary North's website, describing "guerilla tactics" and "bottom-up theocracy" to achieve Christian Reconstructionism's goals.

The unifying principle of all these data points: a long-term covert plan of destruction for the Republican Party, the nation's public schools, the nation's largest Protestant denomination. And, of course, for the nation itself.

In order to make their vision of society a reality, they are willing to wait a long time and to engage in politics to make it happen. "We are to work at our callings and wait on the Lord to place us in positions of influence in his time," according to North's book.

Once in power, they assert their brand of Christianity: "Christian Reconstructionists further insist that Jesus Christ is Lord of political leaders," he writes. "All political leaders are directly responsible to Jesus Christ in the discharge of their public office, as well as in their private lives... Practically, this means that political leaders should seek the guidance of Scripture in framing their political positions and programs."

Interestingly, Reconstructionists don't seem to care about actually holding onto power in the conventional sense: "The purpose of getting involved in politics, as Reconstructionists see it, is to reduce the power of the State," according to North's book.

And they are willing to wait to get what they want. "History is with the Reconstructionists as they advocate a return to God's law as the standard for righteous living, for the individual in self-government as well as elected officials in civil government," North writes.

That is what makes the debt ceiling debate so chilling. The Reconstructionists have waited a long time to be in powerful positions. And now that they possess power, they are perfectly willing to use it to "reduce the power of the state" so that the God of the Old Testament can swoop in to rule the Christian nation they believe will result from chaos.

And from where they sit, blowing up the financial system is a pretty good way to make it happen. 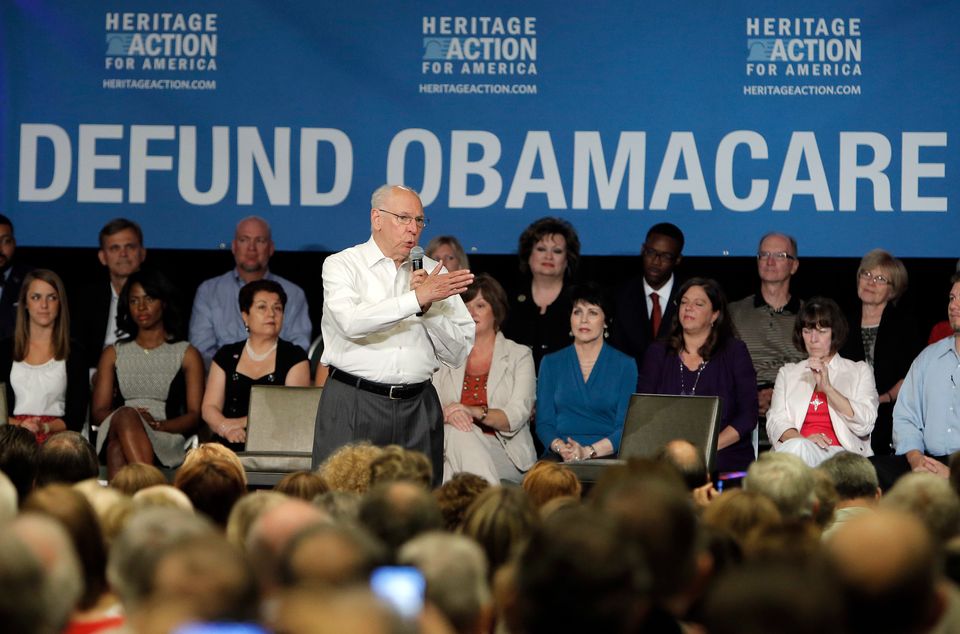