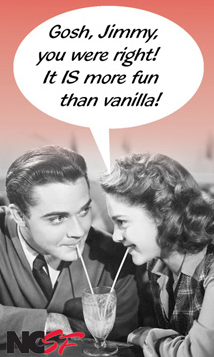 There are plenty of things I like about Fifty Shades of Grey. It's a hot romance novel, which is always good, and it has kinky sex in it, which is even better. But E.L. James fell into the classic stereotype by making Christian Grey the dominant one in the relationship.

Just take look at him: Christian is a sexy 27-year-old billionaire who runs his own business empire. As unbelievable as that is, if you took him at face value and dropped him into any kink club in the country dressed in his Armani suit and grey tie, what would most kinksters think? He's a submissive.

In fact, I'd be more likely to believe that E.L. James' husband -- the middle aged man in tweed in the background -- is the real dominant of her fantasy.

That's because you can't judge a book by its cover when it comes to kink. The surface image doesn't tell the true story because you can't see what's going on in our minds and hearts, and that's where kink really happens.

Submissives are often very powerful in their careers and personal lives. They are good at taking control and getting things done, so when it comes to sex, it's time to let go and let someone else do the work to take them on the fantasy ride of their life. The submissive sits back and just enjoys it.

Pop culture gets it wrong because you can't judge a person's sexuality by what they do. That's why you might see a feminist CEO of a Fortune 500 company who is submissive to her husband, as well as a broke college student dominating men twice her age.

If you dig deeper, many powerful people are sexually submissive because the submissive is the one who is really in control. The submissive can stop whatever's happening at any time. The submissive decides on their hard and soft limits of how it's okay to play.

That's the real power of Fifty Shades of Grey. It's a three-book-long negotiation between two people who are falling in love. The characters talk about their vulnerabilities and their desires as they work through their differences, and in doing that, they create a deep intimacy that everyone is responding to.

The stereotypes of kink focus on what people do to each other, when it's really about sharing ourselves with each other. Doesn't everyone long to be understood and accepted? Kinky people know the secret to finding true intimacy, and now thanks to Fifty Shades of Grey, everyone else does, too.

So the next time you see a well-dressed successful professional, instead of imagining him holding the riding crop, imagine him trussed up in bed begging for the kiss of the whip. It will blow your mind. But that's what kink is all about.