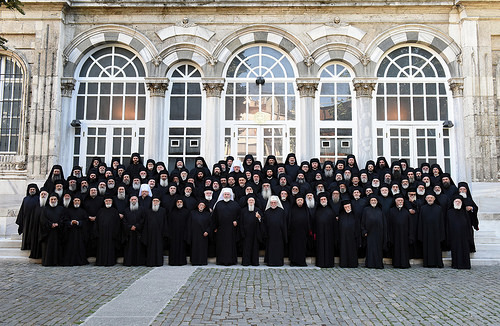 Deep in the heart of Turkey, in the historic city of Constantinople (Istanbul), high-ranking religious leaders gathered recently to examine and deliberate on a range of both spiritual and secular issues.

The assembly in Taksim Square -- where the imposing Republic Monument commemorating the 1923 founding of Turkey is located -- saw almost 150 bearded clergy dressed in black congregate.

One could presume that in 99.8 percent Muslim Turkey it was leaders of Islam who gathered; instead, it was hierarchs of the Orthodox Church led by the First among Equals, His All-Holiness Ecumenical Patriarch Bartholomew.

Orthodox Christianity's presence in present-day Turkey significantly predates the Republic's founding, the Ottoman Empire before that and even Islam itself.

Two and a half centuries before Muhammad, Constantine the Great (who, along with his mother, Helen the Empress, are venerated as saints in the Orthodox Church) granted official permission for Christianity to exist and flourish, beginning in 311 and made more robust in 313; he also moved the Imperial Capital from Rome to the shores of the Bosphorus, the "New Rome."

Since the time of Christ and preaching of the Gospel in Byzantium by Andrew the First-called Apostle, the history of Christianity has been inextricably linked to Asia Minor or Anatolia, which corresponds closely to today's Turkey.

From the glorious 1,100-year long Byzantine Empire which included the seven Ecumenical Church Councils, to the multi-century subjection to Ottoman rule, Eastern Orthodoxy, and in particular the Ecumenical Patriarchate, has never ceased its role as the guardian of ancient Christendom and protector of sacred tradition.

The Ecumenical Patriarchate is today in the Phanar district of the city where East meets West; from there, it serves and has direct ecclesiastical oversight of numerous parts of the inhabited world -- the oecumene -- in addition to indirectly guiding other Patriarchates (including the ancient ones of Alexandria, Antioch and Jerusalem) and autocephalous or self-governing local Orthodox Churches in a spirit of fraternal love.

In March 2014, for example, the Patriarchate, led by His All-Holiness, organized a Synaxis (gathering together) of the Primates of the Orthodox Autocephalous Churches; among the commitments made in the communiqué was to hold a Holy and Great Council of the Orthodox Church to be convened by Ecumenical Patriarch Bartholomew in Constantinople in 2016.

This brings us to the Church of the Holy Trinity in Taksim Square where a Synaxis of Hierarchs of the Ecumenical Throne was held from August 29-September 2, 2015.

Hierarchs from five continents under the administrative and spiritual leadership of the Patriarchate gathered to discuss issues of ecclesiastical, pastoral and theological importance.

Specific subjects included the theological dialogues with other Christian communities, the Orthodox response to bioethical issues, the spiritual roots of climate change, as well as the "pastoral ministry of the Church toward the humanitarian refugee crisis."

From Korea to Crete, Argentina to Australia and most everywhere in between, it is the Ecumenical Patriarchate which preserves the unity of Orthodoxy.

Notwithstanding its history as the One, Holy, Catholic and Apostolic Church, Orthodoxy is not a relic of a bygone era but is always renewing itself while remaining steadfast to the faith handed down by Christ, His Apostles and the Fathers of the Church -- neither adding anything, nor taking anything from it.

The Synaxis of Hierarchs of the Ecumenical Throne also discussed the forthcoming Holy and Great Council, where Orthodox Primates will seek to resolve contemporary challenges for the Church and its flock. At the same time, on September 1st -- the Ecclesiastical New Year -- hierarchs gathered to celebrate the centuries-old Divine Liturgy of St. John Chrysostom, followed by the venerable tradition of Signing the New Indiction (see His All-Holiness below).

This marriage of new and old, continuous renewal yet reverence for tradition, is brought to life because of the unequalled esteem of the Ecumenical Patriarchate of Constantinople and leadership of His All-Holiness Ecumenical Patriarch Bartholomew, who brought together 150 hierarchs from around the world to a Muslim city square whose undying roots are Christian. 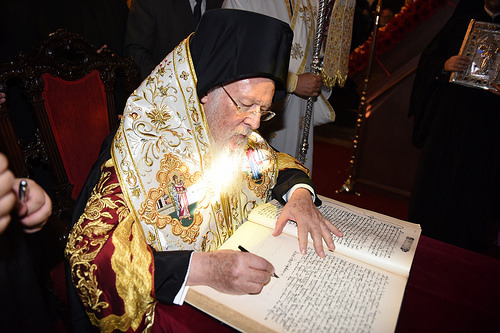