This week more than 50 Christian leaders came together to voice our support for the framework of a Joint Comprehensive Plan of Action between Iran and the P5+1 nations (the United States, the United Kingdom, France, Russia, China, and Germany) concerning Iran's nuclear program. Sojourners published the leaders' statement as a full-page ad in Roll Call, a Washington, D.C., political newspaper widely read by members of Congress and their staff.

The statement, signed by leaders from all the major streams of American Christianity -- Roman Catholic, evangelical, mainline Protestant, Orthodox, and Pentecostal -- is reprinted below. We now want to share this letter with the broader public. I urge you to add your own voice in support of the diplomatic process and share the opportunity with others. Read it; discuss it with your friends, family, and co-workers; and add your name. This is a historic opportunity for diplomacy to triumph over armed conflict, and people of faith and conscience can play an important role in helping the process succeed. 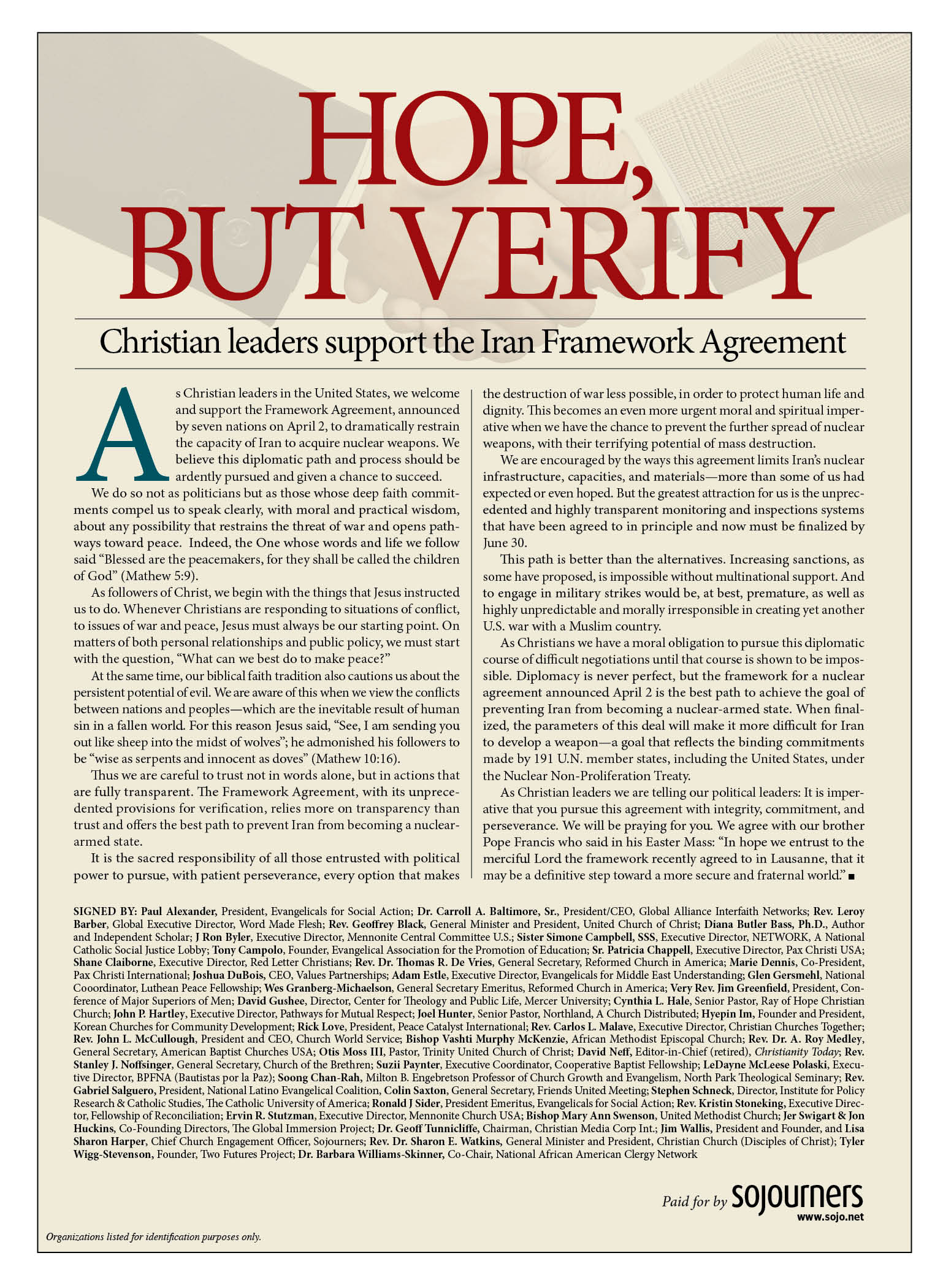 As Christian leaders in the United States, we welcome and support the Framework Agreement, announced by seven nations on April 2, to dramatically restrain the capacity of Iran to acquire nuclear weapons. We believe this diplomatic path and process should be ardently pursued and given a chance to succeed.

We do so not as politicians but as those whose deep faith commitments compel us to speak clearly, with moral and practical wisdom, about any possibility that restrains the threat of war and opens pathways toward peace. Indeed, the One whose words and life we follow said "Blessed are the peacemakers, for they shall be called the children of God" (Mathew 5:9).

As followers of Christ, we begin with the things that Jesus instructed us to do. Whenever Christians are responding to situations of conflict, to issues of war and peace, Jesus must always be our starting point. On matters of both personal relationships and public policy, we must start with the question, "What can we best do to make peace?"

At the same time, our biblical faith tradition also cautions us about the persistent potential of evil. We are aware of this when we view the conflicts between nations and peoples -- which are the inevitable result of human sin in a fallen world. For this reason Jesus said, "See, I am sending you out like sheep into the midst of wolves"; he admonished his followers to be "wise as serpents and innocent as doves" (Mathew 10:16).

Thus we are careful to trust not in words alone, but in actions that are fully transparent. The Framework Agreement, with its unprecedented provisions for verification, relies more on transparency than trust and offers the best path to prevent Iran from becoming a nuclear-armed state.

It is the sacred responsibility of all those entrusted with political power to pursue, with patient perseverance, every option that makes the destruction of war less possible, in order to protect human life and dignity. This becomes an even more urgent moral and spiritual imperative when we have the chance to prevent the further spread of nuclear weapons, with their terrifying potential of mass destruction.

We are encouraged by the ways this agreement limits Iran's nuclear infrastructure, capacities, and materials -- more than some of us had expected or even hoped. But the greatest attraction for us is the unprecedented and highly transparent monitoring and inspections systems that have been agreed to in principle and now must be finalized by June 30.

This path is better than the alternatives. Increasing sanctions, as some have proposed, is impossible without multinational support. And to engage in military strikes would be, at best, premature, as well as highly unpredictable and morally irresponsible in creating yet another U.S. war with a Muslim country.

As Christians we have a moral obligation to pursue this diplomatic course of difficult negotiations until that course is shown to be impossible. Diplomacy is never perfect, but the framework for a nuclear agreement announced April 2 is the best path to achieve the goal of preventing Iran from becoming a nuclear-armed state. When finalized, the parameters of this deal will make it more difficult for Iran to develop a weapon -- a goal that reflects the binding commitments made by 191 U.N. member states, including the United States, under the Nuclear Non-Proliferation Treaty.

As Christian leaders we are telling our political leaders: It is imperative that you pursue this agreement with integrity, commitment, and perseverance. We will be praying for you. We agree with our brother Pope Francis who said in his Easter Mass: "In hope we entrust to the merciful Lord the framework recently agreed to in Lausanne, that it may be a definitive step toward a more secure and fraternal world."

Tony Campolo Founder Evangelical Association for the Promotion of Education

*Due to scheduling issues, name did not appear in original Roll Call ad.

NOTE: Affiliations included for identification purposes only. Signatures do not necessarily represent the viewpoint of the institution.