Remember when Christian Louboutin titillated our hearts like a Disney love story when he announced he'd be making a version of the glass slipper from "Cinderella," back in April? Well, hold onto your (respective) Prince Charmings, because the cinematic shoe is finally here.

Women's Wear Daily got the dirt on the new butterfly-emblazoned heel, which went on display on Wednesday in Paris. Released in honor of Walt Disney’s release of “Cinderella” on Blu-ray disc this fall, the shoe channels that iconic piece of footwear from the 1950 Disney movie using lace and Swarovski crystals in place of actual blister-inducing glass. At least Louboutin has stuck true to the plot point where Cinderella tripped and lost one of her heels: the new Loubs measure in at 120-millimeters (almost five inches).

Louboutin himself debuts the shoe in a short film, playing an old-timey cobbler tasked with making a heel for a modern-day Cinderella.

It's not that we're shocked the shoe is a little flowery -- for the man who invented the SEX shoe, minimal is not exactly part of the Louboutin vernacular. But still, if it were up to us, we would have gone a little more simple -- maybe a translucent version of Kate Middleton's favorite pump? -- to evoke the idea of glass.

Scope out the new heel below and tell us: will you be getting your Cinderella on? 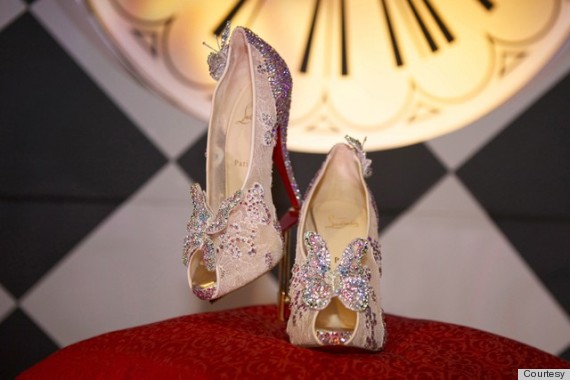