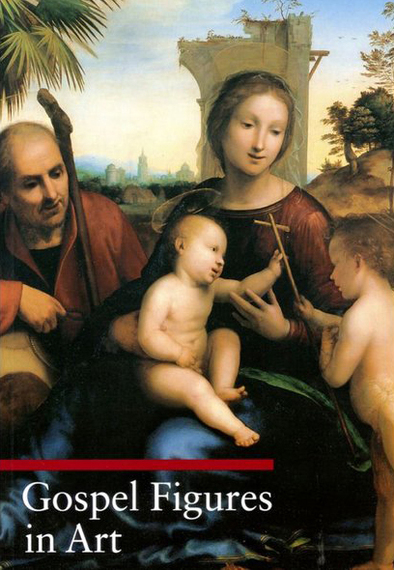 Above is the book cover of Gospel Figures in Art by Stefano Zuffi. It contains over three hundred photos of Renaissance paintings, which were inspired by the Gospels, the first four books of the New Testament. The Gospels (Matthew, Mark, Luke , and John) tell the story of the birth, life, ministry, and death of Jesus. Zuffi's book cover image features Mary, Joseph, the infant Jesus, and young John the Baptist.

This image tells us that the figures are Christians, with Jesus and John the Baptist displaying a crucifix to emphasize the point. Moreover, the book's cover, together with its title, forecasts what the reader can expect on turning the pages--a plethora of art representations of Christian Gospel figures. And if that's what you were anticipating, you would not be disappointed. Painting after painting shows a Christian Jesus, his Christian family, Christian disciples, or Christian followers. Despite the artistic beauty of these paintings--and no one would dispute their aesthetic glories--the representations are false. These Gospel figures are not Christians.

In fact, there is no such thing as a "Christian Gospel figure." All of the Gospel figures are Jewish. All were born Jewish and died as dedicated practicing Jews. And that's not opinion or spin. It's what the Gospels say, with narratives and descriptions that leave no room for doubt. It's also what biblical scholars have confirmed from their readings of the Gospels in the New Testament.

The cover image is anachronistic in converting pre-first-century Jews (Jesus was born around 6 BCE) into Medieval or Renaissance-era Christians. Christianity did not exist at the time represented here. The painting on the book's cover is by Renaissance artist Fra Bartolommeo (1472-1517) and is titled The Rest on the Flight into Egypt with Saint John the Baptist. It's based on the Gospel of Matthew (2:13-14), which reports that after learning of the birth of the Jewish Messiah, King Herod ordered the killing of all Jewish children in Bethlehem under the age of two. Herod feared that a Jewish couple had produced the new King of the Jews, a birth that was forecast in the Torah (Old Testament). That's why Mary and Joseph are fleeing to Egypt with the newborn Jesus in Bartolommeo's painting.

But what Bartolommeo's painting, as well as massive numbers of other Renaissance paintings, fails to inform us is that Jesus was a dedicated Jew, that there was no Christianity during his lifetime, that the crucifix was a feared and hated symbol of the slaughter of untold numbers of Jesus' fellow Jews, that the crucifix wouldn't become a Christian devotional symbol for at least another three hundred years, and that Christianity as a coherent separate religion would not emerge until well after the death of Jesus.

Art historians, art critics, and curators of Renaissance painting exhibits have participated in a grand deception. They have remained silent in the face of falsifications of biblical history in artworks that are staring right at them.

Why should we care? The answer may not be obvious at first. But the truth is that in erasing Jesus' Jewish identity with images that show no connection to Judaism, these powerfully rendered artworks supported the virulent anti-Semitism and persecution of Jews that infected European societies through the Medieval and Renaissance eras and which continues today.

Art historians offer spurious rationalizations to defend these falsifications of biblical history, while ignoring the lethal consequences for Jews and the antagonism between Christians and Jews that these artworks supported. They claim that the ethnic cleansing of Judaism in artworks was an inadvertent collateral effect of the Renaissance style of contemporizing figures in appearance, dress, and setting. That view is given lie to by the demonized depictions of Jews--"the others"--in artworks of the same period.

Surprisingly, Jews participated in the deception. They unwittingly enabled the falsifications by not challenging the omission of Jesus' Jewish identity and heritage. They may even have welcomed it. Why would they object when they were told by rabbis and other Jewish leaders that Jesus was an apostate who defected from Judaism? And the persecution of Jews throughout the Medieval and Renaissance periods, often in the name of Jesus, drove Jews to distance themselves from Jesus and Christianity.

Fortunately, that rejection is turning around now that Jewish scholars and writers are on the case with groundbreaking books like Rabbi Shmuley Boteach 's Kosher Jesus, Dr. Michael Brown's The Real Kosher Jesus, Professor Amy-Jill Levine's The Misunderstood Jew, Rabbi David Zaslow's Jesus: First Century Rabbi, and other works, including mine, which differ on fine points but enthusiastically resurrect the thoroughly Jewish Jesus.

I'm always amused and dismayed at Christmas time when I notice Jews cringing at displays of the nativity scene, a totally Jewish event--displays showing a Jewish carpenter (Joseph), his 14-year-old Jewish wife (Mary), and their newborn child (Jeshua), who will be circumcised on his eighth day as prescribed in the Torah (Luke 2:21). Punctuating this Jewish scene, the Gospel of Luke (2:22) tells us that Mary performed the seven-day Jewish purification ritual after giving birth. Then she, Joseph, and Jesus entered the Jerusalem Temple for an offering and blessing, mandated in the Torah (Luke:2:23-27). After returning to Nazareth, the family traveled to the Temple in Jerusalem every year to celebrate the Jewish holy days (Luke 2:41.)

In the present climate of reconciliation of Christianity and Judaism, led by the healing statements of Pope Francis (e.g. "Inside every Christian is a Jew"), isn't it time for the art world to tell the truth about the falsification of biblical history in artworks? Toward that goal I've organized a unique art exhibit: "Putting Judaism Back in the Picture: Toward Healing the Christian/Jewish Divide." The participating artists have created images that remind us of the two sides of the Jesus story: Jesus the dedicated Jew and Jesus whose life and teachings inspired a new religion. Examples of these artworks for the exhibit are included in my new book, Jesus, Jews, and Anti-Semitism in Art: How Renaissance Art Erased Jesus' Jewish Identity and How Today's Artists Are Restoring It.

The upcoming holiday season celebrating Hanukkah and Christmas is an ideal time to redress past errors of omission. Perhaps the miracle of the lights of Hanukkah can illuminate the common ground of the two faiths.