(Reuters) - Reported cases of Christians killed for their faith around the world doubled in 2013 from the year before, with Syria accounting for more than the whole global total in 2012, according to an annual survey.

Open Doors, a non-denominational group supporting persecuted Christians worldwide, said on Wednesday it had documented 2,123 "martyr" killings, compared with 1,201 in 2012. There were 1,213 such deaths in Syria alone last year, it said.

"This is a very minimal count based on what has been reported in the media and we can confirm," said Frans Veerman, head of research for Open Doors. Estimates by other Christian groups put the annual figure as high as 8,000.

The Open Doors report placed North Korea at the top of its list of 50 most dangerous countries for Christians, a position it has held since the annual survey began 12 years ago. Somalia, Syria, Iraq and Afghanistan were the next four in line.

The United States-based group reported increasing violence against Christians in Africa and said radical Muslims were the main source of persecution in 36 countries on its list.

"Islamist extremism is the worst persecutor of the worldwide church," it said.

WAR AGAINST THE CHURCH

Christianity is the largest and most widely spread faith in the world, with 2.2 billion followers, or 32 percent of the world population, according to a survey by the U.S.-based Pew Forum on religion and Public Life.

It faces restrictions and hostility in 111 countries, ahead of the 90 countries limiting or harassing the second-largest faith, Islam, another Pew survey has reported.

Michel Varton, head of Open Doors France, told journalists in Strasbourg that failing states with civil wars or persistent internal tensions were often the most dangerous for Christians.

"In Syria, another war is thriving in the shadow of the civil war -- the war against the church," he said while presenting the Open Doors report there.

About 10 percent of Syrians are Christians. Many have become targets for Islamist rebels who see them as supporters of President Bashar al-Assad.

Nine of the 10 countries listed as dangerous for Christians are Muslim-majority states, many of them torn by conflicts with radical Islamists. Saudi Arabia is an exception but ranked sixth because of its total ban on practicing faiths other than Islam.

The report spoke of "horrific violence often directed at Christians" in the Central African Republic but said only nine deaths were confirmed last year because "most analysts still fail to recognize the religious dimension of the conflict."

The report had no figures for killings in North Korea but said Christians there faced "the highest imaginable pressure" and some 50,000 to 70,000 lived in political prison camps.

"The God-like worship of the rulers leaves no room for any other religion," it said.

There was now "a strong drive to purge Christianity from Somalia," the report added, and Islamist attacks on Iraqi Christians have been increasing in the semi-autonomous Kurdish north, formerly a relatively safe area for them.

Veerman, based near Utrecht in the Netherlands, said that killings were only the most extreme examples of persecutions. Christians also face attacks on churches and schools, discrimination, threats, sexual assaults and expulsion from countries.

Open Doors, which began in the 1950s smuggling Bibles into communist states and now works in more than 60 countries, estimated last year that about 100 million Christians around the world suffered persecution for their faith. 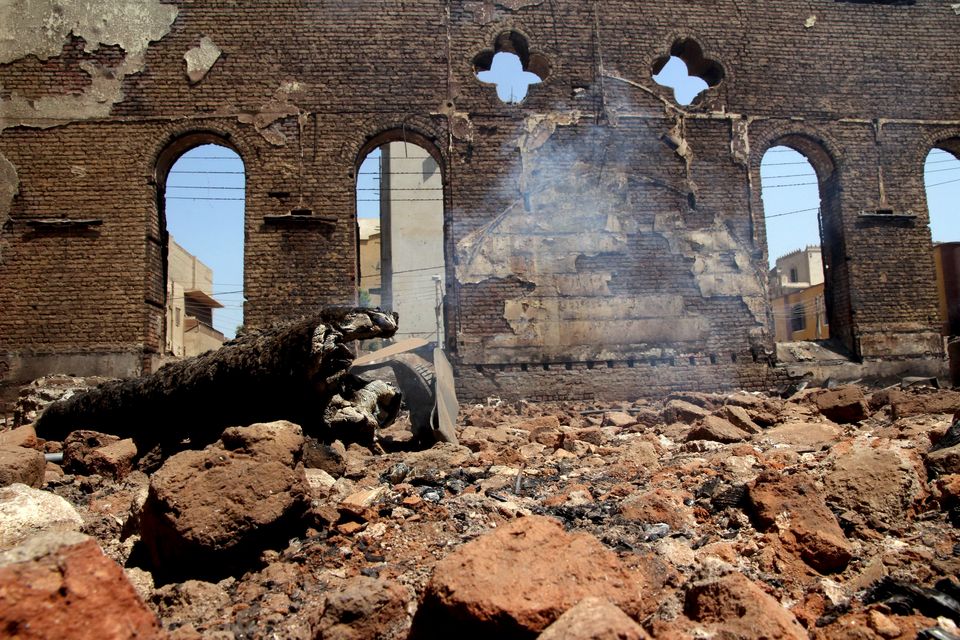 1 / 16
Anti-Christian Violence In Egypt
The smoldering ruins of the Evangelical Church of Malawi are seen after it was ransacked, looted and burned on Thursday by an angry mob, in Malawi, south of Minya, Egypt, Saturday, Aug. 17, 2013. In the province of Minya south of Cairo, protesters attacked two Christian churches, security officials said. Many of Morsi's supporters have criticized Egypt's Christian minority for largely supporting the military's decision to remove him from office, and dozens of churches have been attacked this week.
AP Photo/Roger Anis, El Shorouk Newspaper)