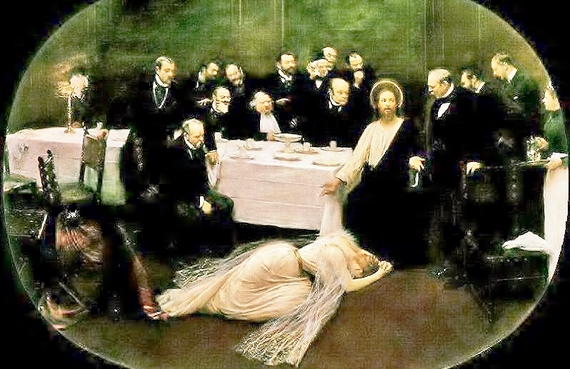 My last HuffPost piece, Refrocked and Ready: Franklyn Schaefer, LGBTQ Faith Hero, provoked debate on a Facebook Christian Blogger group, which isn't much of a surprise. A goodly number of Christians refuse to include the handful of scriptures which mention same sex behaviors in the huge batch of Bible verses they discard when making decisions about their own affairs. Some of the debaters were respectful, others disparaging and nasty, proclaiming that my marriage is an abomination, that my soul has been twisted by Satan, and that I use Christ as a puppet.

I love a good debate, particularly on issues related to theology and sexuality. It's been a passion for some years. But people rarely want to actually engage in dialog. Instead of conversation and discussion, the debate turns into some sort of mutant sports chimera. I'm trying to play catch, where each participant reads, considers, and responds. But most of the time the other participants are playing tennis, with no intention of catching the ball and considering the questions. Instead, they scan for a phrase and whack the ball back as fast and hard as they can, hoping perhaps that it will slam me in the face on the way in.

Meanwhile, this gorgeous passage poured out from this week's readings:

And the Word became flesh
and made his dwelling among us,
and we saw his glory,
the glory as of the Father's only-begotten Son,
full of grace and truth.

John testified to him and cried out, saying,
"This was he of whom I said,
'The one who is coming after me ranks ahead of me
because he existed before me.'"
From his fullness we have all received,
grace in place of grace,
because while the law was given through Moses,
grace and truth came through Jesus Christ.
No one has ever seen God.
The only-begotten Son, God, who is at the Father's side,
has revealed him. (John 1:14-18)

As my wife and I discussed the passage I realized something. I touched on this issue when I wrote What Jesus Said No Longer Applies, but the concept was made even clearer by John's words.

Jesus faced the religious scholars and authorities, who theoretically knew the most about who God was. Those scribes, pharisees, and priests watched Jesus violate Mosaic law after law and make statements that contradicted what they believed God wanted. They observed him proclaiming outcasts and sinners to be heirs of the kingdom before them. And he said "Look at me. I am sent by the father to do his will. The father and I are one."

The opening of John tells us that the law came through Moses, and that grace and truth come from Jesus. It says that no one has seen God, but that Jesus reveals him.

The pharisees from long ago just couldn't get it. The Jesus they saw before them didn't make sense. He threw their understanding of what righteousness meant straight out the window, and they didn't like it.

The marvel is that it's still happening. The gospels are filled with stories of Jesus facing off with these people and trying to show them that love is more important. It didn't work then, and it still isn't working, despite the fact that he died trying. Today's pharisees trot him out not because of his message, but despite it, erecting him as a new idol and toting him around as proof that if you don't do what the modern day pharisees say, and live as they say you should live, then you shall suffer eternal damnation. They hoist him up, perpetually on the cross, as a sign of warning.

None of us can know God until we stand before him, face to face. Until then we all see as through a glass darkly. We all get this Christianity thing wrong. We misunderstand scripture. We imperfectly execute his will for our lives. We pick and choose which scriptures to live by and which to discard as irrelevant. All of us. Every Christian. And so we have to ask ourselves which way Jesus, our judge and intercessor, would prefer us to live:

Which of these does the Jesus of the gospels seem more likely to desire?