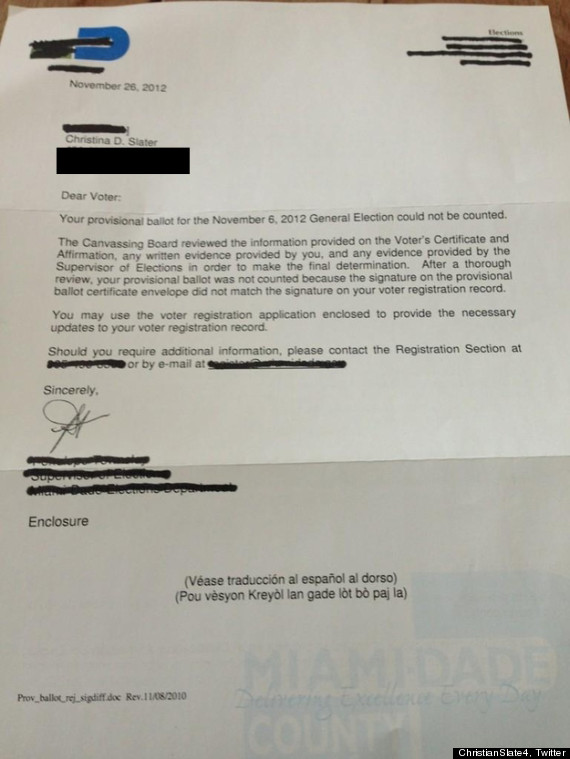 Mike Bennett
AP
Mike Bennett (R-Bradenton) was President Pro Tempore of the Senate in 2010 when he said he was okay with making it more difficult to exercise the most treasured right in America.

"I don't have a problem making it harder [to vote]," he said. "I want people in Florida to want to vote as bad as that person in Africa who walks 200 miles across the desert. This should not be easy."

"This is a hard-fought privilege," he added, according to the American Independent. "This is something people die for. You want to make it convenient? The guy who died to give you that right, it was not convenient. Why would we make it any easier? I want 'em to fight for it. I want 'em to know what it's like. I want them to go down there, and have to walk across town to go over and vote."

While we're not sure what "them" Bennett was referring to, we do know this: Politifact rated his African voters claim a "Pants On Fire" lie, after laughing African elections experts said the greatest distance they'd ever heard of was a 3-mile hike in Chad.

"The fact is there's a lot of bad actors out there and there's an opportunity currently to game the system," De La Portilla said. But he was busted by PolitiFact after arguing early voting days should be reduced because "there is a trickle of two or three people a day" at certain Miami-Dade locations.

The fact-checking site's lie detector rated his claim a decided false, noting "we could only find two cases where the number of voters on a particular day fell to single digits -- and that was likely because of Tropical Storm Ernesto."

Diaz De La Portilla, one of three brothers heavily involved in Miami's GOP politics, made his argument in 2010 despite an increase in early voting from 2006 -- when Tropical Storm Ernesto disrupted South Florida -- to 2008's presidential contest.

"We should be careful not to overreact and potentially stigmatize the vote-by-mail process or make the process more difficult by creating obstacles to voting by mail," he said. "This would only result in suppressing the vote of Cuban-Americans, many of whom prefer or require voting by mail, and disenfranchising this critical Republican constituency to the benefit of the Democratic Party and its candidates."

According to The Miami Herald, nonpartisan groups, including the 2006 U.S. Elections Assistance Commission, noted that "absentee balloting is subject to the greatest proportion of fraudulent acts, followed by vote buying and voter registration fraud."

Rivera, meanwhile, is currently embroiled in a federal investigation for allegedly having financed a ringer candidate during the August primary with cash under the table.

"I don't want to disenfranchise anybody in their voting rights," Scott said, rolling out an initial list of 182,000 Floridians who he claimed could potentially be non-citizens. Of the list, reporters and activists quickly found hundreds of natural-born and naturalized U.S. citizens. From that list, 58 percent of which was black or Hispanic, Scott fought -- against the Department of Justice -- to ultimately refer 196 people who had possibly voted illegally to prosecutors.

But though he fundraised on his "defend[ing] the right of millions of legal Florida voters to cast ballots," Scott did little when long lines formed for early voting, primarly in dense liberal-leaning pockets of Florida, creating hardship for people who were ultimately unable to cast ballots.

And though his GOP predecessors Jeb Bush and Charlie Crist both extended early voting by executive order when polls were overwhelmed, Scott ignored such calls by local officials, including Monroe County's Republican Supervisor of Elections.

Despite the mess during truncated voting days and his state's punchline status on election night, the Governor still claimed "A great thing happened: 4.4 million people came out and voted either absentee or early by Election Day ... we did the right thing," before ignoring a reporter asking him repeatedly about whether he should have extended early voting (watch above).

Numbers, however, show early voting was down almost 10 percent across the state and 28 percent in Miami-Dade, where lines were longest.

"Just go on Google, and go to the news section and you can find a pretty long list of articles documenting the fraud [Florida has] seen."

Just what an electorate wants to hear. PolitiFact deemed Eisnaugle's claims "false," noting that he omitted that his referenced instances of fraud were caught prior to any potential registration.
Dennis Baxley
AP
Rep. Dennis Baxley (R-Ocala), the original co-sponsor of HB 1355, the bill limiting early voting, admitted on MSNBC that there was no widespread voter fraud in Florida. Instead, he insisted the bill was a preventative measure and that its attached crackdown on third-party registration "makes people more comfortable and secure."

Al Sharpton noted Florida's 14 early voting days had been essentially issue-free in 2008. "How are you going to give an improved way of voting when there was nothing wrong?" Sharpton asked. "Curing what? There was no fraud."

"We're not gonna wait for fraud," Baxley insisted. "Governments all the time are accused of waiting until there's a big problem. We don't need that. We need a clear, precise elections process that's well protected."

And when Sharpton pointed out the bill directly cut into the days black and minority voters prefer to cast ballots, Baxley dismissed the issue: "What in this bill applies differently to anyone of a difference race?"

Baxley's track record on racially sensitive issues isn't without controversy: a member of the Sons of Confederate Veterans, he fought for a special Confederate flag "heritage" license plate and argued against removing racially insensitive language from the state song, commonly called "Suwanee River."

"We're in a multicultural area and everyone's culture is celebrated but mine," he said.

Nelson, a former army captain, chastised Lopez-Cantera for amending the bill to make transient voters who failed to update their home address vote provisionally, a move Nelson said would have an adverse affect on military families.

But Lopez-Cantera said Nelson's claim was a "disgraceful suggestion that the Florida Legislature would attempt to diminish the voting rights of American heroes," and the amendment passed with the bill.
Carlos Gimenez
Getty Images
Miami-Dade Mayor Carlos Gimenez (R) saw the long lines forming across his county and heard the complaints of his constituents, yet declined to join neighboring counties and local officials in asking Gov. Rick Scott to extend the early voting period.

And when the Supervisor of Elections opened her office for a last-minute in-person absentee ballot option on Sunday before Election Day, Gimenez ordered the doors closed on the nearly 200 voters who were waiting in line. He only allowed voting to continue after waiting citizens protested, banging on the Elections office doors and chanting, "Let us vote!" as national media began picking up the story.

("Bureaucrats worry about procedures. Mayors worry about people," groused CBSMiami's veteran newsman Jim DeFede, who said the Sunday debacle revealed Gimenez to be a "bureaucrat, not a leader.")

Then, Gimenez's county suffered excruciatingly long lines again on Election Day, when the mayor drove to Brickell's overwhelmed polling station only in late afternoon to find out why the line was 6 hours long. By then, it was too late to fix much: Miami-Dade was embarrassingly behind, Florida again left America shaking its head and the last voter in line stood until 1:30 a.m. to cast a ballot, long after the presidential race had been called.

(Photo by Joe Raedle/Getty Images)
Don Gaetz
AP
The state senator from northwest Florida argued in chamber, “We don’t want to dramatically reduce early voting,” then voted for the reduction of early voting days by nearly half.
Advertisement
Ellyn Bogdanoff
AP
Then-state Sen. Ellyn Bogdanoff (R-Fort Lauderdale) had no qualms with expressing how she felt about voting before Election Day.

During her time in the legislature, the conservative Fort Lauderdale attorney said on record she was on a "warpath" to end early voting, according to the Tallahassee Democrat.

Bogdanoff voted for the HB 1355, but was soundly defeated for a second term this fall.