I am a pastor. Because I am a woman, there are many Christian faith traditions where those words would be impossible for me to say. Thankfully, women are welcomed and valued as pastors, ministers and leaders in the Evangelical Covenant Church (ECC), in which I am ordained. 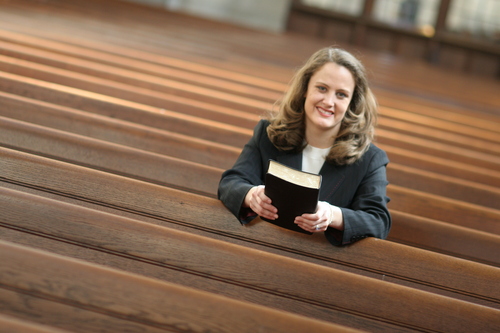 It is true that gender can be, and often is, an issue no matter your chosen field of work, but it feels especially true in conservative Christianity where many prominent leaders still hold fast to the belief that women shouldn't hold leadership roles or mantles of authority. Those women who do lead, serve and pastor are frequently aware of the fact that many find their jobs, ministries and life choices wrong or even sinful.

I recently heard a story of a woman who served as a chaplain in a Catholic hospital. Even though she was a Protestant minister, she was asked to wear a collar. This is not all that unusual. But during one of her evening rounds in February, when a surgeon joined her in the elevator he asked in a condescending and critical tone, "What is this, Halloween?" Another time at the same hospital, a doctor made a joke and asked if he should address the minister as "Father." Still another hospital staff person suggested that she should quit her job and "go home to have children" where her gifts would be better utilized. One might find some humor in these types of scenarios, but if I look at the underlying issues and assumptions, they make me cringe.

Even among those who support women in ministry, there can be a blind spot when it comes to understanding the long history and entrenched views about women in positions of leadership and influence, particularly in the church. A friend recently shared her experience of asking a leader in the church for advice on pursuing leadership opportunities. She was told that if she were good at her job, opportunities would find her. This may be true for men, but it is frequently untrue for women, particularly in conservative Christian communities. Often, women are not invited to the table, regardless of how accomplished or experienced they are.

In many conservative fundamentalist or evangelical churches, women are allowed to serve in any capacity as missionaries. Women are given roles to serve by leading worship and are often permitted, if not encouraged, to teach the Bible as missionaries or evangelists externally. But in the local church context, these same women are often blocked from holding mantles of leadership. It is common for women to be called as directors of children's ministries or care ministries (two areas where women's stereotypical strengths may be showcased) but are often unable to rise to positions of authority. These ministries are critical and women who serve alongside of children and in compassion ministries should be celebrated! My concern is when women's giftedness is limited to only serving in these capacities.

Many churches believe that a woman can only be in positions of power if there's a man with a mantle of authority over her. This is not only harmful for women, but it limits the diversity of the church. In doing so, it hinders our ability to worship at our fullest potential. It hinders our ability to minister to our communities.

Women... and men... all of the people God created in His image... have been called to use their gifts. It is clear from this passage in scripture: when people are blessed with the gifts of leadership, they are called -- regardless of gender -- to lead diligently.

By limiting the roles of women in the church, we are dismissing this beautiful diversity of God's creation. We are missing out on experiencing a blessing from God by limiting whom we allow to participate in the leadership of the church.

This Women's History Month, let us come together to celebrate women by encouraging them to fulfill whatever roles God has called them to fulfill. Celebrate the women who lead and teach you well. Acknowledge their gifts and your own.

If you are unsure of your feelings about women in Church leadership, I encourage you to check out these great resources, How I Changed My Mind about Women in Leadership: Compelling Stories from Prominent Evangelicals (Zondervan) and Discovering Biblical Equality: Complementarity without Hierarchy (InterVarsity Press).

I also invite you to join me, my co-authors of Forgive Us: Confessions of a Compromised Faith and other faith leaders in a twitter teach-in on the sins of the church against women. Wednesday, March 25, 9 pm Eastern. @ForgiveUsBook, #ForgiveUsBook